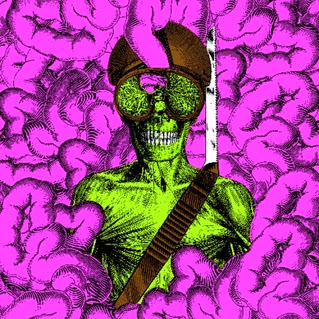 San Francisco’s Thee Oh Sees started as a side project of John Dwyer (of The Hospitals and Coachwhips, among others) for his experimental home recordings, and then evolved into one of the greatest and most prolific psych-garage rock bands of the last few years. In only 2011, they released the LP Castlemania in May, a couple of split records and now Carrion Crawler/The Dream, their third album on In the Red since Warm Slime, and quite frankly their best to date. Castlemania had a pop influence, a bit derivative of ‘60s groups like The Byrds and was characterized by short, catchy, vocally focused tracks, whereas the new record showcases longer, denser and more instrumentally orientated songs. It may lack some of the inventiveness of its predecessor, but it represents a more cohesive experience and the right balance between the psychedelia of Warm Slime and the catchiness of Castlemania.

It also seems more a band effort, rather than just a Dwyer’s project. Though never in the foreground, Brigid Dawson’s keyboards are as important as ever on this album, and so are her backing vocals and the percussion of Mike Shoun and Lars Finberg. Recorded live to tape, Carrion Crawler/The Dream has the same electric energy of a Thee Oh Sees live show.

“Contraption/Soul” is a long jam of lo-fi punk guitars you want to dance, actually mosh to. Its followed by drug-induced/ing “Robber Barons” that for its sexy bass line and hazy, reverb-laden stomp seems reminiscent of The Black Angels psychedelia, the instrumental keyboards-led “Chem Farmer” and short garage number “Opposition (With Maracas)”.

The record was originally conceived as two separate EPs, and though there is an overall cohesiveness, the second half is more influenced by the krautrock of acts like Can and Gong. “Dream” in particular is very NEU!-like: it’s nearly seven minutes of swaggering jam where all instruments have their chance to show off, from the psychedelic keys to the dueling drums, the cutting bass lines and the screeching guitars. “Wrong Idea” is probably the weakest track, though its length suggests is more a sort of interlude, with crazy rhythm and totally incomprehensible vocals. “Crushed Grass” is constructed around hammering bass lines and uncontrollably distorted guitar. In the mind-blowing Stooges-esque “Crack In Your Eye”, Dwyer’s voice brims with craziness over retro organ drones and stunning guitar solos, before the album comes to a close with the fuzz-fest of “Heavy Doctor”.

Carrion Crawler/The Dream doesn’t represent a total departure from other Thee Oh Sees albums, but somehow is a more mature record, the transition between songs are smoother, and it has a more polished sound without losing the straightforwardness and craziness of the band’s previous releases. It beautifully resurrects the spirit of psychedelic rock but by modernizing it with a touch of krautrock and punk, it gives it an original twist only few contemporary garage-psych bands manage to achieve.

Posted by Eleonora C. Collini at 9:57 am