IN CONVERSATION with A PLACE TO BURY STRANGERS 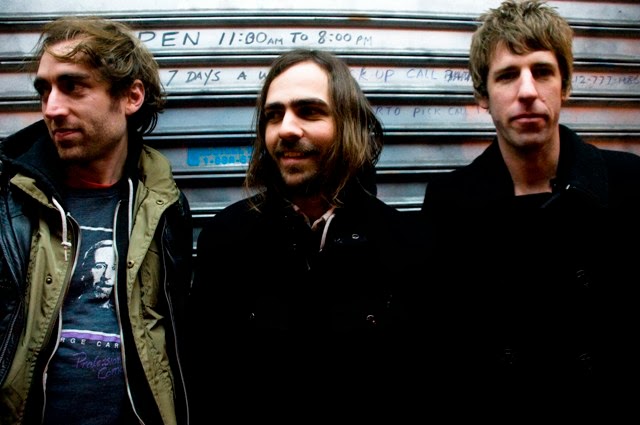 Eleonora Collini: A couple of months ago you released the Onwards to the Wall EP. It was the first record entirely produced, mixed and mastered by you guys at the A Place to Bury Strangers-owned Death byAudio studio, right?

Eleonora: It was also the first record with you officially on board, as you joined the band in 2010. What do you think you’ve brought to the mix?

Dion: I think the first album was pretty much a bunch of demos tied up together. The second one I think Oliver did a lot by himself, then he mixed it and did a bunch of recording with another producer (Andy Smith). This upcoming album (Workship) is the first recording I’ve been involved with, so it’s been pretty exciting for me. I went into it with a open mindset. I don’t want to change this band but I can put a different background, And I can learn a few things too.

Dion: Yeah, a garage/punk background. But it was exciting for me as I saw it like an opportunity to learn how Oliver does things, expand my things and maybe add a little bit. But I didn’t want to change the band’s sound, I just wanted to try to support

Eleonora: I actually think the bass has changed quite a bit. I find it now slightly more aggressive and almost as melodically important as the guitar. It’s very different from the droning background of APTBS’ early work…

Dion: Well I am who I am. I don’t know, maybe the bass sounds a bit more foreground-y. I have a strong personality but I don’t think the music or the sound has changed much

Eleonora:"You are the one”, the song from your upcoming album that's been circulating on internet, is a bit more restrained and brooding if I may say. The sound is more polished too.

Dion: I don’t think I’ve played anything on that track, We used a demo actually. I am who I am, I cant completely disregard that. I’ve got to be what I am. It took me almost two years to get to that as at the start I was a very wary of trying to play bass the way I wouldn’t play bass. But now I can just be what I am and I have a much more free approach.

Dion: I was playing with a band in Los Angeles and it’s where we first met. I saw APTBS around New York and knew (ex drummer) Jay Space very well so they got in touch when they needed a new bass player

Eleonora: And now you have a new drummer too?

Dion: Robi Gonzalez, yes. This is his first tour with us.

Eleonora: I read in a last year’s interview that you guys wrote 40-50 songs for the new album. Shall we expect lots of B-sides and EPs ?

Dion: Yeah, not all 40-50 songs are completed, some songs are more completed than others but there are a lot of B-sides we’ll be using. New single “You are the one” is going to come out soon with a B-side. We also have a bunch of ideas we’re going to work on when we’re done touring. Maybe a Live EP is coming out soon. I don’t know yet. We’ve been recording some of the shows. Also we’ve been thinking about doing something very special, something very cool but I don’t want to say it quite yet.

Eleonora: You also seem to be into remixes. You did the remix of Grinderman’s “Warm Tamer”, School of 7 Bells’ “Windstorm”, and then the Holy Fuck’s "Red Lights" remix you released as a download to help you out after your van got stolen in Rome last Spring…..

Dion: Yeah my passport and my green card got stolen.

Eleonora: Ouch, I thought they only stole your music equipment!

Dion: No there was no equipment stuff on the van. It was just our personal bags and I was the only one that had my passport and wallet in my bag. Now I have it always on me!!

Eleonora: It must have been pretty cool to see how people were willing to help you out?

Dion: Yeah that was really amazing. We got a lot of money and that really helped us out. I really appreciated it. There has been a couple of times recently where I’ve seen people being very generous. I have a friend that almost died. You’ve probably heard of him: the DJ Jonathan Toubin.The night after we heard about the accident (a taxi crashed into his hotel room in Portland, OR and landed on top of him while he was sleeping in December 2011) we had this big benefit party at Motor City, a Bar in New York where I DJ and he DJ’d too. And I must say all of his friends came and I’d never seen so much genuine love and caring for a person, and it was really amazing and heartfelt as you don’t see that much.

Eleonora: I know you are originally from New Zealand, but you’re now part of the Brooklyn music scene. How would you describe it?

Dion: Well, we have our Death by Audio studio which is also a music venue, though we’re not heavily involved in running it. But we are a community of people who try to do something cool. To me personally it’s very exciting because that’s the kind of scene I came from in New Zealand as well. When I was a teenager I had a band called Nothing at All, and we also had this collective called Frisbee Studios, we had our own venue and we made our own stuff. So it’s exciting for me to be back to a similar scene later in my life as I like being part of that kind of things.

Eleonora: Do you usually read your reviews?

Dion: Yes I do but I try not to hear.

Eleonora: Are you getting tired of being called the “loudest” band?

Dion: Totally. When I see “Jesus and the Mary Chain”, “My Bloody Valentine” or “the loudest band in town” I pretty much put the review down. It’s more the comparisons that are getting annoying, because I think we’ve kinda grown out of it and become our own entity. For me in particular I’ve never even given a damn about those bands. I can appreciate them but I’m a 36 years old man and I have gone through stuff myself. As for the “loudest” thing, it can have an interesting angle, I can see what it is, but there's also been so much writing about it that I kinda find it to be lazy journalism. If I was a journalist I’d probably try to come out with something a bit more original. That has been asked million times and I’ve got sick of that. Or another one is when they ask you “where does your name come from?”…oh man that’s the worst question!

Eleonora: I swear that’s not what I was going to ask you next ….

Dion: Yeah to me that’s a High School question!

Eleonora: What kind of music do you like to chill out to?

Dion: Jesus and the Mary Chain and My Bloody Valentine (laughs). I like to listen to Thelonious Monk. I also love soul music. And even reggae music, especially in New York in winter, listening to Bob Marley kinda relaxes me. Maybe Serge Gainsbourg. I don’t really listen to classical music much.

Eleonora: What was the first record you bought?

Dion: Probably Falco’s “Rock me Amadeus” single. But the first album that really blew my mind was Billy Idol’s Rebell Yell. I was born in 1976 and that came out in 1984 so for a 8-9 years old it was pretty mind-blowing. I felt like I got something I’d be searching for. It may be a lame record for someone today but that was what I was listening to when I was young. I could have said something cool like The Rolling Stones. My parents had a very terrible record collection with no Elvis, no Beatles and no Rolling Stones. It was ABBA, the Bee Gees which are all cool bands but as a musician maybe not the most inspiring thing

Eleonora: Did you always want to be a musician?

Dion: Pretty much always, since I got that Billy Idol album. There was a time when I wanted to be a professional skateboarder and was skateboarding a lot in my early teens. But then I discovered music and bought my first guitar when I was 14 and then by the time that I was 15 I started jamming with people, touring with bands, recording, then I discovered the Frisbee Studios and it was always about music

Eleonora: Was there ever a moment when you thought you weren’t going to make it?

Dion: No never, not one moment ever. Especially when I was a young kid my thought was that I was going to be in the best band ever, better than the Beatles and I really believed it. Then things started happening for me, I had a little bit of success but now that I’m a bit older my views have changed and as long as I can do what I love doing and I’m confortable, I mean I have a wife now. So as long as I enjoy what I’m doing, that’s my number one goal

Eleonora: Lets talk a bit about your videos. I’ve always found them particularly interesting. They all seem to be around the themes of alienation, focusing too much, how we view ourselves, themes that are also heavily present in most APTBS’s songs. I particularly love the “Keep Slipping away” video…..

Dion: I don’t actually like that one so much but I’m glad you do. I don’t usually like videos that follow the storyline too much. I think I don’t like music videos in general. Some of them are really great and I love them, though. You don’t need a lot of money, what it takes is just a simple, good idea. You don’t need an elaborated idea

Eleonora: Are you going to play any new songs tonight?

Dion: I don’t know, we change the setlist every night. This tour is kinda of the new EP tour, so we’re going to play a couple of them, then maybe 1 or 2 new songs, and some from the 1st and 2nd album. Robi, our new drummer still doesn’t know all the songs so at the moment we have a little bit of limited choice

Eleonora: What do you think of the UK audiences?

Eleonora:  Do you find any difference between North and South. For instance London’s crowd tend to be more reserved than Glasgow?

Dion: Well London is like all big cities, like New York. And then you have places like Spain and Poland where crowds go totally crazy. All Eastern Europe actually, they’re probably not that concerned about being seen, they just want to have a good time. But you cant rely on a crowd to give you energy as sometimes it just doesn’t happen

Eleonora: Do you have a favourite city where you particularly enjoy playing?

Dion: Tokyo. And I like playing in New York, Austin, Barcelona. But I enjoy them all

Eleonora: Whats the most important thing you always need to have with you when you tour?

Eleonora: Are you going to play many festivals this year?

Dion: I don’t know yet

Eleonora: Do you prefer playing at festivals or in small clubs?

"Onwards to the Wall" EP review

Email ThisBlogThis!Share to TwitterShare to FacebookShare to Pinterest
Tags A Place to Bury Strangers, Interviews