IN CONVERSATION with CRYSTAL STILTS

Crystal Stilts are one of the most interesting bands of the psych-pop/garage Brooklyn scene of the last few years. With their jangly guitars, druggy melodies and spacey vocals, they have managed to create a distinctive sound incorporating various influences from Velvet Underground to the 60’s psychedelia.
While at first listen their third record Nature Noir (out now on Sacred Bones) seems to be a sort of repetition of their previous works, it’s in fact much more cohesive and structured than anything else they have done so far.
I had a fun time with them before their gig at Cargo, London, talking about their musical background, what inspires them to write music and why they ironically called their new album Nature Noir.

Eleonora Collini: Can you talk about Nature Noir production?

JB Townsend: We recorded it at Gary’s Electric Studio in Greenpoint, NY in about two and an half weeks. I produced it. We had a pretty good idea of what we wanted: we wanted a 60’s psychedelia kind of sound.

Eleonora: Were there any differences with the previous albums in terms of writing and recording?

JB: Yeah we probably wrote a bit more together, rather than just me writing a lot of music, this album was more a group thing. We practiced the songs and worked on them a lot before going in the studio rather than just working on them on the spot.

Brad Hargett: I was gone for some of the time they were writing. Initially it was just JB and me writing together. I think a lot of the earlier songs were more free-form, in some of them the versus last longer, some of the songs are way longer than others and so on.  On the last record the songs are more structured and because of that I was writing in a different way, as having more structured songs kinda forced me to be more disciplined and try different things.

Eleonora: What's the idea behind the title?

Brad: It's actually an ironic title. "Noir" is a word that only applies to things that people make. Films or books are noir because they are not happy ended. So I thought it would be fun to apply that to Nature as Nature is not man-made, but in a way now civilisation, humanity is interacting with Nature in a way that has never happened before. Men are taking control in a way that’s affecting Nature. Now we sort of have control over the fate of the world and whether that goes in a good or bad direction, we have some responsibilities on how things turn out.

Eleonora: What do you usually get inspiration from when writing?

JB: Usually I try to combine things a lot. So if I want to do a song that sounds like this song I try to think about two or three different songs that I like a lot and really grab me, and I try to combine them. That’s the way I think about it, just stealing and borrowing from a lot of different things so that it then becomes something else. But also sometimes a song would come from something else and would just be something we think of and come up with on our own too.

Eleonora: And what about the lyrics?

Brad : I think this album is different. On the first couple of records I was writing more about my internal inspirations, mental, cerebral type of things that didn’t really involve people’s emotions so much. But with Nature Noir, which is a bit more specific I tried to write about simple theories and simple ideas. I think this record is more emotional in a way. In general I just try to capture something I don’t understand, as if it’s something you understand it’s not going to be worth talking about, whereas if it’s something that’s confusing you and you are trying to figure out, you try to write about it to figure it out. And that’s the main reason why I started writing.

Eleonora: What is your musical background?

JB: I was just a fan originally. My grandfather was a record producer and that kinda inspired me a bit as I looked at him as a role model. You know, you look at your family for some kind of heritage. 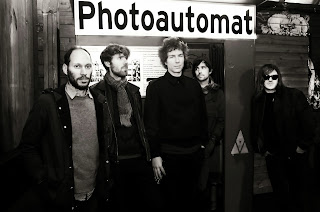 Brad: Well I have no music background and I still don’t play any instruments at all. I think when I met JB and we started collaborating I just got very lucky. I had a normal up-breeding and I just didn’t want to do everything as it was expected to be, so I had all those outside influences, people that were mavericks. Since school my dad was a sports guy so I always had all those things to do though I have always loved music. But once I finished college and I was able to do other stuff, I started working for record stores and consuming a lot of music, and I tried to start writing. I wasn’t playing any instrument so I figured I could just write lyrics.

Brad: We actually met in South Florida. JB worked at a coffee shop across the mall where there was a record store I worked for, and we had a couple of friends in common. He would come over and we would talk about music as there were just a few people listening to that type of music, so we became friends just from being music fans. Then we moved to New York and he had access to a practice space, so we would go there and I would bring some words in. We were just going there randomly once a week for a couple of years before we actually started developing anything.

Eleonora: You guys are originally from Florida where there has never been a huge music scene and your music doesn’t seem to reflect that kind of mentality anyway. Do you think that somehow your origins actually had an influence on the music you do?

Eleonora: You have been living in New York for a while now. How do you think New York music scene has evolved over the last few years?

JB: At one point, around 2007 or 2008 there were so many bands coming to New York and they were getting a lot of attention. Now musicians seem to move to Brooklyn to do it, it's more a deliberate rather than a natural thing. But I am not in the right position to judge as I am not really active in the scene.

Eleonora: Is it true that you all have regular jobs?

Brad: Yes, I work for a student money company. I do computer research and stuff during the day.

JB: I work as a part-time bartender. 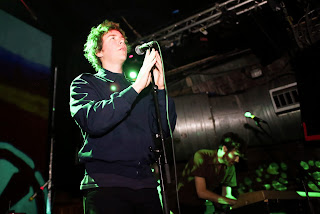 Eleonora: Can you tell us about the "Star Crawl" video?

JB: We got a friend of ours to do it and he had a lot of problems making it. We had a pretty clear vision of what we wanted to do since the beginning, but the actual execution, the shooting was a disaster. I don’t think that altered the way the video came out entirely, but I think it changed it a bit, though in the end we got exactly what we wanted. I think maybe subconsciously we wanted something that was urban but was showing the nature side as well. As if you think of New York you think of First Avenue and things like that but New York has a lot of parks, it’s quite scenic outside of just the buildings. So it was our goal to show that different side of New York.

Eleonora: What was your worst tour experience?

Brad: We were playing at this festival in Sweden, and obviously the first day we got there and were very jet-lagged it was just pouring rain. And you know, when you tour you just tend to pack light, so I had just brought a pair of shoes, and only a few minutes after getting there I had mud all up my knees. Then I was trying to get some food, surrounded by all these 15 -year old kids, with mud all over my ankles (laughs), when I finally saw some pizza and was so excited about it. Then I saw this guy grabbing it and it looked pretty good but then he started pouring mayo on it, and I didn’t know if that was a Swedish thing so I didn’t dare complain. So yeah nothing against Sweden but that festival was really an awful experience (laughs)

Brad: I haven’t in a couple of years as all my stuff is currently in a storage space. My record player and all my vinyls are in storage so at the moment it wouldn’t make sense to buy any records.

JB: Yes, not as much as Andy (Adler), our bass player who buys a lot, but I buy maybe one record a week or something like that.

Eleonora: What artists would you like to collaborate with?

JB: I think it’s very unfortunate that we can’t collaborate with Broadcast anymore. Then among the contemporary bands I think Deerhunter are really good. I also have lots of respect for Times New Viking.