IN CONVERSATION with PEGGY SUE

The music of Peggy Sue doesn’t really fall into any genre. Formerly known as Peggy Sue And The Pirates, Rosa ‘Rex’ Slade and Katy ‘Klaw’ Young started playing together in 2005 and were later joined by drummer Olly Joyce. Calling themselves a post-folk band and writing songs based around delicate layers of guitars and brooding vocals, the London trio has sublimely combined the soul tradition of country-blues with the slacker vibes of indie rock.

Following Fossils and Other Phantoms (2010) and Acrobats (2011), their third full-length Choir of Echoes is now out on Wichita Records in UK and Yep Roc in the States.

It’s their album release show (Photos) in the beautiful St Old Pancras Church (which couldn’t be a better venue for their ethereal, somehow spiritual music) and Rosa, Katy, Olly and touring bassist Ben Rubinstein are excited.
After taking some portrait photos, Rosa and I try and look for a quiet spot to chat, and after first sitting on the spiral stairs that lead to the organ room, we then end up on a bench in the church’s front yard.

Rosa tells me that she’s pretty proud of how Choir of Echoes turned out. “We recorded it in South Wales at Rockfield Studios which is most famous for ‘Bohemian Rhapsody’, and when we arrived the Pixies had just left which is kinda cool.” Jimmy Robertson produced the record and longtime collaborator John Askew mixed it. “For this album we had more time”, Rosa explains. “We recorded there for about a month. That was actually the first time that we'd written in just one place. We had a vision of what it was going to sound like and what the idea behind it was going to be. We wanted to do a more relaxed record which was more expansive sonically. It was quite a fulfilling album to make.”

As the title suggests, the new record is about voices, “not so much about singing which is obviously such an important part of what Peggy Sue’s sound is”, Rosa specifies, “ but it’s more about finding your voice and singing again, like doing playful harmonies and things like that, like the idea of traditional backing singing, hence the plural ‘voices’.” She then continues: ” but it's also about finding your voices, more in terms of personal life. And the power of words or the construction of a word, which is specific to a language. We talked a lot about what a word can do, how you can say something and how that can be miscommunicated, and how you can understand something differently from what a person is trying to say. That’s to me the idea of voices being very powerful.” I then ask her to elaborate the album’s title and she points out that it comes from the myth of Echo “who was a nymph that managed to trick people with her words, so as result she was cursed so that she could only repeat what someone had just said. And negatively, the fact that someone can do so much but then you can take it away from them is such a powerful urge. That’s what Choir of Echoes is about.”

One of the things that I have always liked about Peggy Sue is that they keep switching instruments on stage. So I am curious about how their writing process works and if they end up playing the instrumental parts they wrote. “To be honest you are not going to like it as at the moment there is less switching!!”, Rosa jokes. “Having said that, we have always found it very fun to pick up a new instrument and learn how to play new weird chord structures and things that don’t really exist. That stimulates your creativity and you write things you haven’t written previously. We got lots of new songs out of new instruments as we didn’t know how to play them.” It’s mainly her and Katy that come up with melodies, then the band gets together and writes around that. “Sometimes a song can come out of a jam”, she carries on, “and we just put lyrics on it which is the difficult part as both Katy and I write very personal lyrics so writing collaboratively can be difficult.”

Since Rosa mentioned that Peggy Sue's lyrics are very personal, I want to know how autobiographical their songs are. “We definitely write autobiographically. That’s also how people interpret music or any creative form of writing, as you understand it through your own experience and make it yours. Especially on this record we have taken lots of characters from literature. But that’s also about making fun of certain situations.” When I try to approach the music influences’ topic she seems a bit reticent and evasive: “There are really so many and they are all so different. All of us listen to different music anyway so I don’t think there is any artist in particular that has had a major influence on us”.

The beautiful gospel-tinged first single ‘Idle’ is about being unemployed. I ask Rosa how difficult she thinks is for young musicians to break through today. “I think it’s very tricky. In general I am a bit faint about the way music industry is going and how people that don’t already have money or support to their work are going to make music. Having said that, today thanks to internet there is a lot of ways to get your music out there. But we will have to see how it goes”. And has there been a particular moment in her career where she felt the most accomplished? “I think it’s a constant up and down”, she comments. “In this industry I don’t think you never get to a point when you’re writing and you think you’ve reached your best. And if you do, then you should probably stop writing.”

Back to ‘Idle’, the promo video is a quirky collage of 1920’s dancers clips which perfectly fits the haunting rhythm of the song. “It’s based on stock footage videos we did for the Peggy Sue Play The Songs Of Scorpio Rising record “, Rosa clarifies, “mainly the video we did for ‘My boyfriend’s back’ and also partially ‘Hit the road Jack’. Then Rachel at Yep Roc Records made another version of it and she kinda took the idea from those stock footage clips but apparently she also used to work for an edit suite which was a kinda of erotic movies thing!”

It’s good that she mentioned Scorpio Rising as I would like Rosa to tell me more about how that project happened. “It was through a friend of us who is an architect and participated to this initiative to build a pop-up temporary cinema space by the canal in Hackney in Spring 2011. They asked us to perform a live soundtrack to a silent film and we decided to rework on the soundtrack to Kenneth Anger’s classic cult film Scorpio Rising (1963). We had never written to a screen and worked with visuals before. It was very fun to do that on a continuous 30 minutes of music. And then we ended up recording those songs in the studio with Jimmy (Robertson) in quite a short period of time.”

Over the last couple of years Rosa, Katy and Olly have been touring non-stop, both supporting bands like Mumford & Sons, The Maccabees and Jack White, and in promotion of their records. I ask Rosa if she has a favourite country or city where she has especially enjoyed playing and she seems very fond of the States, Detroit in particular. “It doesn’t have to be linked to the city, it’s more about the gig. “ Then she adds that “it’s also always amazing to play in London”. And what about a place where they haven’t played yet and would love to? “Japan! I have always wanted to go there.” For now they’re touring the States and Europe and will be back in London for another show at Oslo on the 15th April. Go see them if you can as they are really magical live. 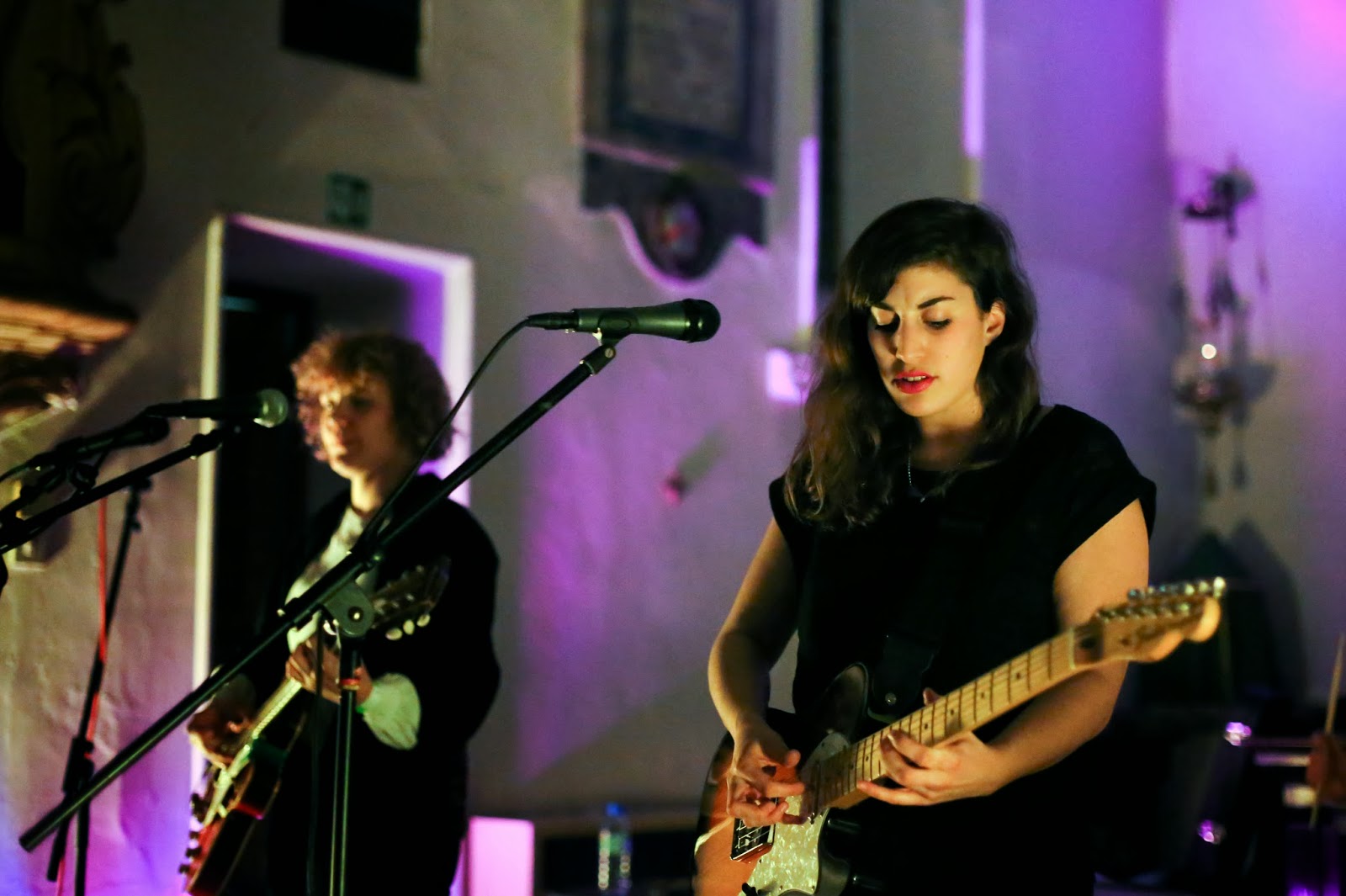