As much as I hate music comparisons, sometimes they are necessary.... so, are you a fan of Shellac, The Jesus Lizard and Fugazi? If the answer is 'yes', then you are going to love this three-piece from Bristol, UK.
Falling Stacks (a.k.a. Gavin on vocals, James on drums and Matt on bass) are lo-fi, sonic experimentation within traditional, solid song structures. There is something familiar in their punchy, abrasive, desperation-filled vocals (think Munch's The Scream), their scatty, at times syncopated rhythms and their twangy guitars, but at the same time their music sounds different and genuine.
So far they've only released two EP's and a third (Vizsla EP) is coming out on Battle Worldwide Recordings in March, but hopefully a full-lenght record will be in the making soon. You can check them out on Soundcloud and Bandcamp.

Gavin: I learned to play the guitar when I was about 15 – and played a lot of punk songs as they were easy – and have been in various punk bands ever since. I think the best way to get better is to play in a band and learn from the people you’re playing with. I’ve never seen the point in being a bedroom guitarist.

James: I've always been an obsessive music fan who buys too much music, so I’ve always wanted to play too. I started on drums, then realised I couldn't take them to Uni halls, so bought a guitar, which quite frankly I should be better at given the decades of practice. So given that inability, I was delighted to switch back to drums in this band.

Eleonora: Do you recall the moment when you decided that you wanted to make music?

Gavin: I asked my mum for guitar lessons when we were on a family holiday in France. My older brother had brought a best of Chuck Berry tape to play in our car and that helped me make up my mind. When I got home I told my two best mates I was planning on learning the guitar, so one of them decided to play drums and the other bass and we started a band (I think we were called Concrete Fuzz). Obviously we were bad, but after six months of lessons and being bad together, in my parents lounge every Sunday afternoon, we finally worked out and played Sex Pistols “Holidays in the Sun” all the way through.

Matt: Predictably it's likely to date back to teenage years spent mostly listening to sub-standard Britpop bands. I'm sure this'll rank high up on Menswear's list of achievements.

James: It’s amazing how many bands claim to have only listened to good music. I started my first band because we wanted to cover Kingmaker and Wonder Stuff’s songs. Then you get into better stuff and you want to ape that, then hopefully at some point you realise you want to write it all yourself, you try and it is about soaking up as much as possible and then meeting other people who have done the same and seeing what you come up with.

Gavin: James had been in a band with Matt playing guitar, and was in a band with me playing bass, but when our drummer left he went on drums and Matt joined (after the other guitarist had also left).

Eleonora: Is your writing process a collective effort?

James: Always. We write everything together in a single weekly practice. An instrument hardly gets touched between practices and all we do is to try and write a song around whatever riff Gavin is playing when we have set up. I don't think anyone has ever shown up with a song all finished and ready to go. 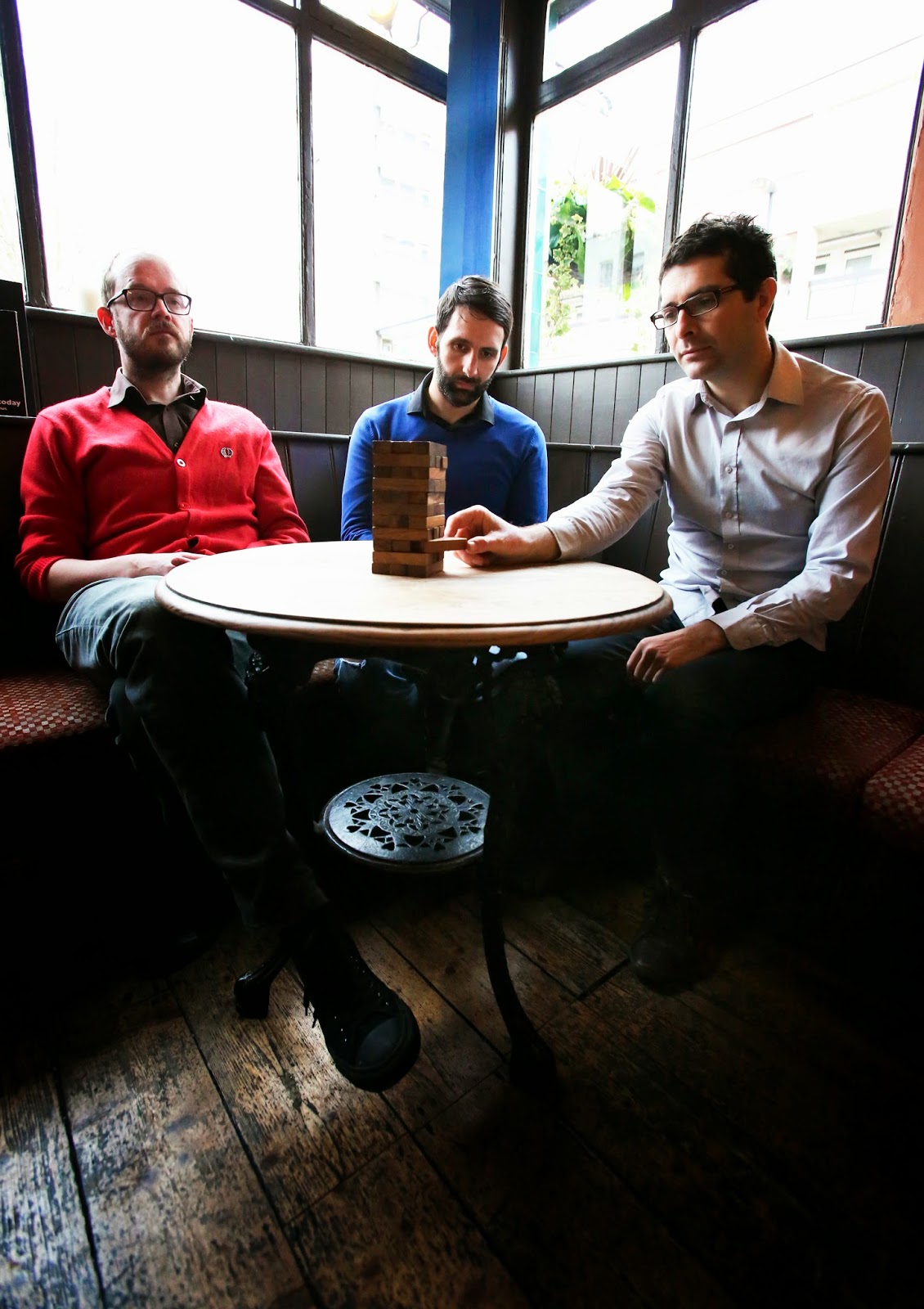 Gavin: There is normally a lengthy process of cutting down sections and adding in stops. We usually have lots of conversations about the structure of a song!

Eleonora: How did you come up with the name Falling Stacks?

Gavin: I think James had the idea of Falling Trees – which sounded too much like Screaming Trees, but we liked the Falling bit, so after a process of adding many words to Falling, to see if they fit, we finally found Stacks.

Eleonora: Please describe your music in just one sentence.

James: Music for people in a hurry.

Gavin: No song should ever be over 4 minutes long.

Eleonora: Let's talk about your discography. You released your first EP on Howling Owl Records in 2012, then you self-released a second EP which was later renamed Dogo Argentino and put out by Battle Worldwide Recordings earlier this year. Am I right?

James: Yep, spot on. We left Howling Owl in March, but wanted to keep things moving so sort of released the EP ourselves, although really all we did was make it available and tell some websites and radio shows that it was out. It asn't a comprehensive campaign! It did the job though as it got us in with BWR, one of the few labels we approached, and that is working really well.


Eleonora: Are you working on any new material at the moment?

James: Well, we have had December off to go to work Christmas parties and get our stuff together for the next record (Vizsla EP), but as soon as we get back together we are going to write for a mini-album, hopefully out towards the end of 2014. We probably have enough songs, but it will be nice to have some options.


Eleonora: What would you consider your major music influences?

Gavin: I think it’s pretty clear that we take influence from American bands like Slint, Fugazi, Shellac etc, but that’s because those bands wrote/write interesting songs – and that’s what we try to do, be a little bit interesting.

Matt: Predominantly, noisy stuff from the last 20 years or so, which probably won't surprise people. Bands with straightforward setups that don't really bother with frivolity, along the lines of Mclusky, The Wedding Present, Part Chimp, that sort of thing.

James: I think ATP festivals got me into more and more noisy bands, and I probably only went to the first one of those because Mogwai were on. They had booked Shellac, and I was like "oh, the guy who produced Seamonsters by The Wedding Present?" completely missing the Nirvana (and everybody else) thing. Those bands, along with Fugazi, who I got into so late, Trail of Dead and Jesus Lizard all write punchy, choppy songs. I don't think we sound like those bands, but we have similar targets.

Eleonora: Can you mention some non-musical influences?

Gavin: It’s a bit of a running joke in the band that we all work in ok-paid office jobs. No one worksin a record shops or are artists or does anything cool...

James: Yeah we all have full-time jobs, two of us have kids, and we don't have much time. Pretty sure that is why most of what we write comes out as a short blast of stuff crashing into itself, rather than some kind of beautifully crafted, polished thing.

Eleonora: Can you tell me about the "White Wild Hare" video?

Matt: It was made by our friends at Hankin Brothers films and there was an open brief so they could do what the hell they liked. And they did! It's fun, daft and certainly memorable.


Eleonora: Do you think there is a sense of music community in Bristol?

James: Yes, Bristol is a good place to be in a band. All the basic stuff is brilliant, things like practice rooms, venues, and guys to fix your gear. We also have a great, supportive record shop in RISE, that are always keen to engage with the local bands, and act as a bit of focal point. You wouldn't have that in most places.

James: The new Stephen Malkmus and The Jicks

Gavin: The new Wooden Shjips (I haven’t listened to it much though, but it seems ok)

Eleonora: Do you have any pre-show habits?

James: We like to eat out. So when we book a gig, we try to find a decent restaurant nearby, favouring Middle Eastern, Italian or Mexican options.

Gavin: Astrict three-pint rule is adhered to before we play.

Eleonora: Are there any dates booked for 2014 yet?

James: Strangely, absolutely nothing right now. Definitely going to get on with that shortly!