I Like Trains is a band that should be taken very seriously. This doesn’t mean that they aren’t funny people to be around, but these guys from Leeds are really a bunch of talented, respectful musicians who have always written profound concept albums about historical events such as the Great Fire of London, the assassination of British Prime Ministers and natural calamities, all narrated by melancholic, evocative vocals over beautifully dense soundscapes.

This month is their 10th anniversary and to celebrate the band re-mastered two early EPs (Progress Reform was re-released last November and The Christmas Tree Ship is currently available for pre-order only via their website, shipping in March) and played a few shows in UK, France and Benelux.
Singer/guitarist David Martin and drummer Simon Fogal catch up with me before the first show of the anniversary tour at London Jazz Café (Photos). We find a quiet spot in the historical Camden venue, a tiny, very hot dressing room where we are joined by Matt Hopkins and Ben Lankester who are filming the interview for Divorce Before Marriage, an upcoming art documentary about the band.

I Like Trains started as a University project. David Martin and guitarist Guy Bannister grew up in Worcestershire. “It’s a pretty boring story”, David jokes. “Guy was playing drums at the time and I guitar. We went to the same school where not many people played instruments so we formed a band together”. Then when they got better they moved to Leeds and went to the College of Music where they met Simon Fogal. “ I got into music through 80s rock records. I was hitting things, like tables, constantly tapping“,  he recalls. “Then when I was 13 I got a drum kit, my friend that lived down the road got a guitar and we started jamming songs of the Beatles and the Shadows”. They all studied music technologies at College where while working on a project together, they recorded themselves making music and that’s how I Like Trains was born. Alistair Bowis later joined them on bass and more recently Ian Jarrold who after touring with them for a while became an official member before the recording of last album The Shallows. “Ian was in this band called Redjetson and we were touring with them in France on our first tour abroad”, David explains. “ We were on the same French label and we were getting along very well so we toured with them other times after that. Then when they split up we asked Ian if he wanted to play guitar with us.”

Over these 10 years, 3 full-lengths and 3 EPs,  the band's writing process has inevitably changed a bit and new sounds and instruments have been incorporated. When they start writing for a new record, first they usually spend a lot of time working out what they want to achieve with it, then they often get new equipment and play around with it for a while. “For instance for The Shallows we got new synthesizers, drum machines, electronics”, David points out. “We keep changing things enough that it feels different and exciting each time.” Apparently they don’t actually talk during the writing process which I find a bit funny and weird. That’s also what Ian initially thought: when he first joined them for the last album he was actually a bit shocked! “ It’s because we sort of can get frustrated while jamming. So we do that on our own but in the same room and then we just see how it goes”, Simon clarifies. For their last two records they had a proper rehearsal space with a little studio. “That meant that we could record and work in a different way and immediately rather than having everything finished before and then go to the studio to record properly”, David tells me. “I like that. It’s like having a place where you can sort of disappear from the world”.

Lyrics have always been such an important part of what I Like Trains are. For David the relationship between words and music is never clearly defined and each song has a life of its own. “Often I just think of a good subject to write about, then I come up with a few lines, add some music around and then we play together as a band. That seems to work pretty well. Other times I just write some sounds and words and try to compose to it. If I had a routine that would no longer be as exciting as the creative process actually is”. David’s lyrics are full of epic imagery and reference to mythological characters which sound as mysterious as somehow contemporary. “The myths we refer to and that were in the Bible’s stories were written for a reason, to guide people. Neither I am religious nor I believe in any mystical stuff, but I think a lot of them are still quite relevant to everyday life otherwise they wouldn’t have maintained that importance.”

Their last record The Shallows conceptualises Nicholas Carr's homonymous book about the effects that  digital technology has had on our lives. I want to know what impact David thinks internet has had on the music industry in particular and he jokes that we could sit there talking about it all day. “I think it’s something the industry is still coming to terms with. Some people definitely use that technology in a great way and then everybody follows that. I think it’s about trying to find the next thing to make things better. But there are also a lot of detriments that have happened. And then on many books and internet pages there is this debate about streaming music and how the artist and people which have created that can actually get paid. “ Have there been more benefits or more drawbacks? “Since we began making music it’s probably balanced out but at the same time I don’t think I would like to be a band starting now. At the moment there is so much music and so much noise talking about music that’s very difficult to get yourself out of that onto the next level. It’s true that today we communicate to fans through social media and we mainly sell our merchandise through internet which is great as we can cut out so many middlemen, but we’ve had the advantage of having the fanbase to do that already. The challenge for new bands is to be as independent as we are and to build up the fanbase that we have which is not that easy nowadays with all the competition.”

Speaking of their fans, David thinks that the relationship with them is everything. They wouldn’t have even put out their second full-lenght He who saw the deep without them. They had left Beggars Banquet and while still looking for a label to distribute the new album, the band started a Pledgemusic project to get fan funding in order to master it and promote it. “That day we didn’t know what to expect but we basically got our target in 24 hours which was just incredible and reinsured us that there was a market for what we were doing and the people actually cared”. That was probably one of the most rewarding moments of their career.

Another achievement they are particularly proud of was having the song “Sea of Regrets” (from He who saw the deep) featured on an episode of CSI : Miami. As their music has also been featured in trailers for Hollywood films such as The Wrestler, Amelia and Beautiful Boy, I ask them if they consider cinema a source of inspiration and David confesses that he’s indeed often inspired by movies. “We look to explore further and make contact within the industry. It’s pretty vital when you get to a certain level, that’s the next thing you look at for both the revenue stream and also for the artist’s possibilities of doing that. To write music for a film would be amazing, it would be a dream!”

In 2009 they also founded their own label I Like Records and Simon set up the PR company I Like Press with Simon Glacken. “I didn’t mean to start it. Basically we did a tour later that year and we needed some promo for the upcoming single “Sea of Regrets”. So I began doing PR for the band after the deal with our previous label ended, and I really enjoyed it. Then I met Simon Glacken who had done the same thing with his label Brew Records, and we merged together.” Is there any bands in their roster we should watch out for? “There are so many! I do more festivals PR though, and some events. But I also look after a couple of bands and one of them is Her Name is Callas who are now touring with us”. Another band we should all check out is Post War Glamour Girls whose debut album came out last week. “They are a fantastic band “ David wants to add. “The entire world should hear their record. They kind of remind me of us when we started out.”

Simon is also part of a new monthly Leeds music podcast called “This is Happening” with Whiskas (of ¡Forward, Russia!/Dance to the Radio) and Dan O’Dell, plus Nathan from the local venue Brudenell Social Club. While historically there has always been a good music scene in Leeds with awesome bands such as Gang of Four and Sister of Mercy, in recent years the spotlight has sort of come back on the city. Simon is telling me that happened in 2006 with ¡Forward, Russia! , Duels, and Kaiser Chiefs, but David interrupts him specifying that the edgy, sort of DYI scene of bands like Eagulls is more representative of what I Like Trains do than Kaiser Chiefs. “Nothing against them of course”, he smiles. “Yeah everything is more DYI, the labels are generally independent”, Simon continues “there is no big corporate, there is the Leeds Academy and now the Arena, but also smaller venues, promoters and festivals. A couple of music pubs where people go from a young age too. There is a good spirit.” Then David wants to reiterate that in Leeds though there are lots of bands making different types of music, musicians still hang out and help each other out as much as they can.

The Shallows came out in April 2012, almost 2 years ago. As in the past they sort of put out a new record (be it an EP or LP) almost every year, I am curious to know if they have actually started working on any new material but apparently they haven’t yet, though David has already thought about a possible new direction. “Looking back at our last album now, some of the things we stopped doing and decided not to include were actually good, so we could potentially bring some of them back in, like some darker, noisier, heavier things. Maybe. Thinking about the possibilities of experimenting with new sounds for the next record is one of the most exciting things about being in a band. “ So fans please rest assured. Not only I Like Trains are going to work on new music soon but they are probably going to surprise us with something a bit different as well! For now if you can catch them at St Philips Church in Salford, UK on the 28th February. 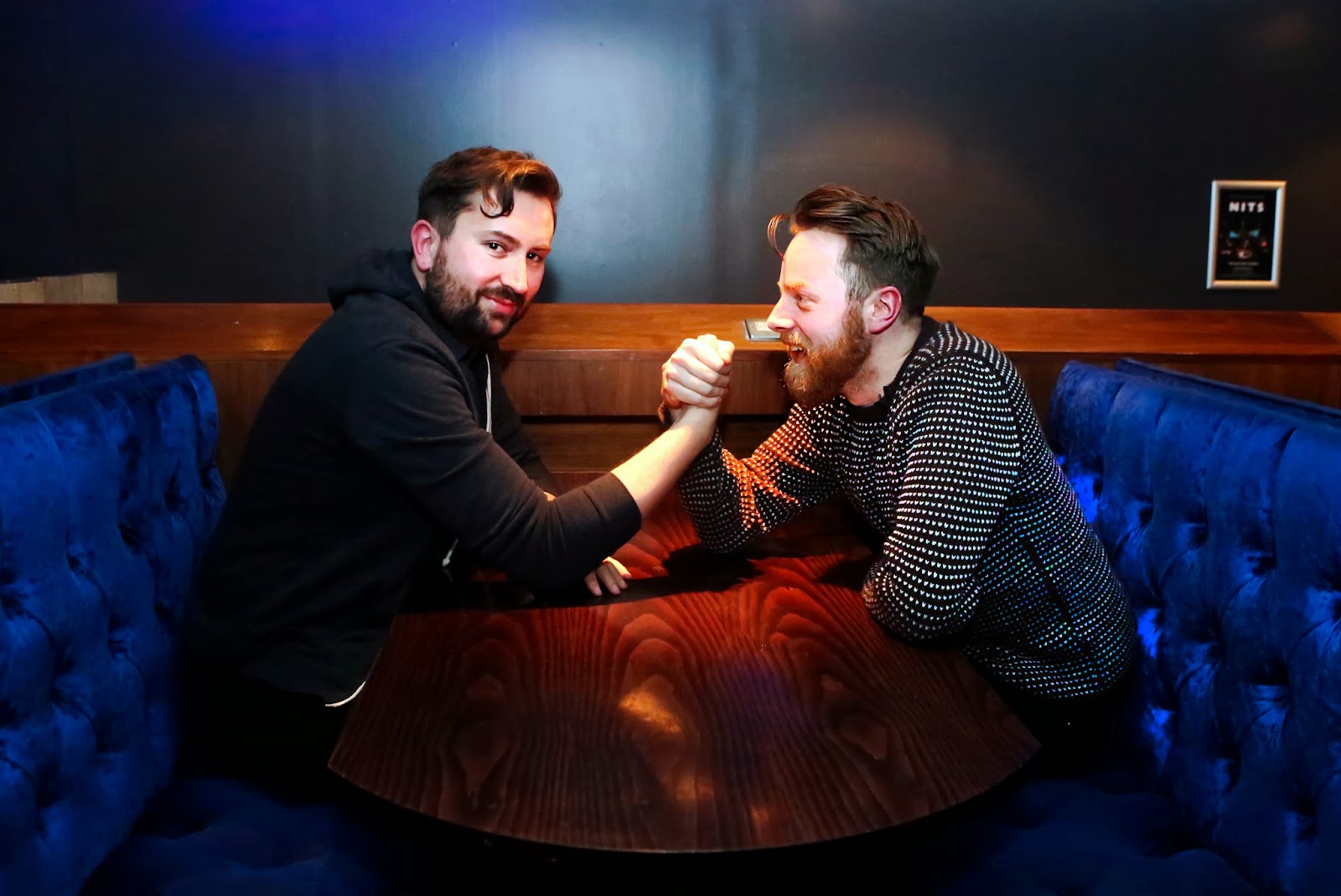