IN CONVERSATION with THE SO SO GLOS 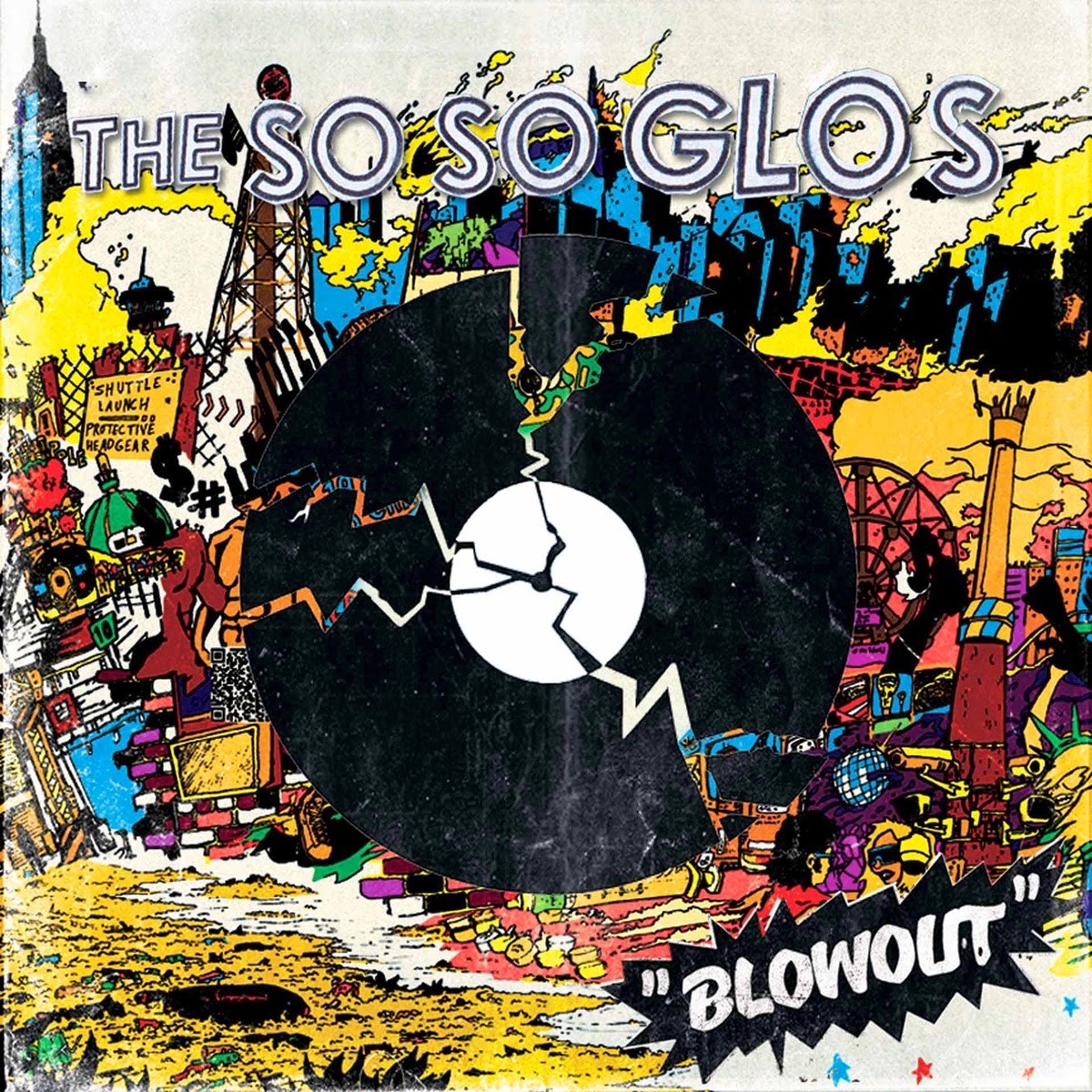 One of the things that make the So So Glos unique is the fact that they have been jamming together since they were super young children! Brothers Alex (singer/bassist) and Ryan (guitarist/singer) Levine and step-brother Zach Staggers (drummer) started playing together at an age when most kids usually have other interests than confining themselves in a basement, making noise out of their instruments. For all their childhood and adolescence, the band was their escape, their main outlet, all made possible also thanks to their supportive parents.

It was only in 2007 though, when they were all around twenty, and after long-time friend Matt Elkins joined them on guitar, that the Brooklyn foursome released their self-titled debut album. Following two EPs, Tourism/Terrorism (which won the ‘Best Punk Album’ category of the 9th Annual Independent Music Awards) and Low Back Chain Shift, their sophomore full-length Blowout was initially self-released last year and then put out internationally via Votiv Music on 19th May. The album is a collection of boisterous, yet poppy songs, equally inspired by British and American punk, and underpinned by boyish exuberance and refusal to follow clichés.

I caught up with Alex Levine over the phone to discuss the record, the DIY culture and the meaning of punk today.

Blowout was recorded in Philadelphia over the course of a couple of months. “I think altogether it was around twenty days of actual recording, but we had been doing demos and crafting the songs for a long time before that”, Alex explains. Long-time friend and collaborator Adam Reich produced it and Kyle 'Slick' Johnson mixed it.

The album begins and ends with a recording of the Levin brothers commenting and re-enacting a Nirvana song, which dates back to a couple of months after Kurt Cobain committed suicide in 1994. Alex, who was seven back then, thought that was an appropriate way to kick off the album, being the first track 'Son of an American' and Cobain being the ultimate son of an American. “Kurt is used as a metaphor for a kind of hero that decided to call it quits and shoot himself. He’s the last generational hero, a metaphor for the American culture and how shitty our generation is right now with people carrying guns and burning out pretty quickly. The song 'Son of an American’ itself is a metaphor for a kind of ‘kill your idol’ first track.” Seven-year-old Alex screaming in his squeaky voice “Do you think he had a gun? Of course he had a gun! He killed himself!” is a shot at his hero, who by killing himself disappointed the young musician and the whole generation.

One of the album highlights is 'Speakeasy', which, accompanied by a kick-ass video directed by Chris Elia, is a sort of anti-internet statement and an attack on how easy is to hide behind a digital wall of anonymity. As the So So Glos seems quite active on social media, I want to discuss how these days people, musicians in particular, can find the right balance and actually benefit from the web. “I think Internet is an useful tool if you’re trying to get the message across and you use it to achieve that, but when it starts to use you, that’s the part when you become the tool”, the frontman points out. “And for control and moderation you need not to forget about reality, which is actually our generational issue, and both the song and the video are a comment on that type of culture.”

Blowout is one of those albums that make sense as a whole and therefore needs to be played on its entirety to get you in the right punk mood. “We definitely took the time to make it a cinematic from-beginning-to-ending type of record and you need to play it front to back”, Alex agrees with me. For this reason he feels equally connected to all the songs on the album. “Each track represents a sort of different state of mind. There was a song on the record called 'Xanax', which talks a lot about being sedated by medication, using technology as a metaphor for that. That was one of my favourite songs, but unfortunately we had to pull it off and now you can only find it on the web.”

All songs have a life of their own and the So So Glos’ writing process is really circumstantial. “Sometimes I’d present the band a full idea for a tune, or I’d just come up with some lyrics and then we jam around them. For some songs I’d just write the lyrics at the end, others come from freestyling. There isn’t just a specific process, they all come alive in a different sort of way, whether I bring the full thing or we all bring a part.”

The Levine brothers’ uncompromising attitude has contributed to the resurgence of the DIY culture and the punk rock scene in their hometown. Banned from CBGB for post-show underage drinking in 2004, just after the 2007's US tour in support of their debut album, they founded an all-ages venue (The Market Hotel) in Brooklyn with show promoter Todd P. Unfortunately the venue is now closed, but they lately also opened Shea Stadium, another DYI collective/recording and studio space, called after the now-demolished stadium of the New York Mets baseball team. “I think it’s very important to create an environment in which you can make art and be creative, and support that for art’s sake”, Alex tells me. “In New York there are lots of places like that because there is this restrictive law of 21+ for most of the clubs, so we have been trying to help create all-ages venues. The basic principle is that if you don’t feel local in the scene, then instead of waiting for something to come to you, you just have to do your own thing and you won't feel like an outsider anymore!”

Connected to Shea Stadium, there is also a label via which Blowout was initially released. “We created Shea Stadium Records as we didn’t have a label when we first put out the new album, so we basically self-released it”, Alex explains. “Shea Stadium Records is actually a brainchild of our producer Adam Reich who first started the all-ages venue too, though we then worked very close to him on that.” The label is now in the process of expanding and releasing other bands’ records as well, so stay tuned! Blowout’s initial release saw the So So Glos literally burning CDs and photocopying the cover, but then it received such good reviews that a couple of months later the band got a deal with Votiv Music, which ended up taking care of the global distribution. “We didn’t really want to do it the classic music industry type of way because we had had lots of bad experiences in the past, so at first we decided to do it on our own. But then luckily some people helped us, and now we are very grateful for not having to do everything on our own anymore and being able to just focus on playing music instead”, Alex admits.

I ask what ‘punk’ means today and the So So Glos’ frontman thinks it’s something that keeps getting reinvented, like painting on a different canvas all the time. “It’s an abstract thing. It’s using the tools you have around to get any message through, having some sort of freedom to do what you want, and also a place you feel like you can belong to. Nowadays it’s easy to wear a leather jacket and look cool, but punk is more about staying true to yourself. It’s the true representation of yourself and not hiding behind something fashionable or too pretentious.”

Alas I haven’t had the pleasure to see the So So Glos live yet, but I know they have the reputation of putting on incendiary gigs. “The audience is as important as the show, the energy goes back and forth, it’s a conversation not a lecture”, Alex says. “So the way that an audience responds and the things, the energy they take away from it are what makes a show unique.”

The band is currently touring in Europe with fellow Brooklynites The Hold Steady. Catch them on one of the following UK dates:

Email ThisBlogThis!Share to TwitterShare to FacebookShare to Pinterest
Tags Interviews, The So So Glos