IN CONVERSATION with THE BLACK ANGELS 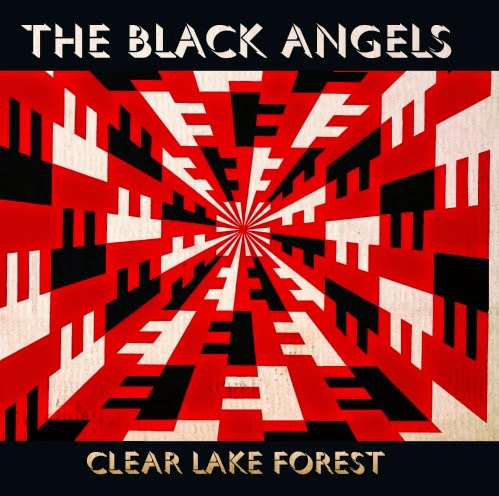 Following their critically acclaimed fourth album Indigo Meadow, The Black Angels (a.k.a. the kings of contemporary psychedelic rock) are back with a hypnotic new EP.
Featuring seven new tracks, Clear Lake Forest was originally released as a limited 10” vinyl on Record Store Day earlier this year, but it's now available in a variety of formats via Blue Horizon.

I had a chat with frontman Alex Maas while he is in his hometown Austin, TX already working on new songs with the rest of the band. “We are constantly writing and creating. At the moment we are recording some new material in the studio”, he reveals.

For Indigo Meadow, The Black Angels had written around thirty songs only seventeen of which were recorded with producer John Congleton, but just thirteen ended up on the album. “For Clear Lake Forest I think we used three of the tracks we had already recorded, then we finished three we had already written and maybe created a brand new one”, Alex says. “It’s hard to tell as we keep writing ideas, versus and chorus, then putting them together and sometimes they may develop into something else.”

Last time I spoke about Indigo Meadow with his bandmate Christian Bland, he was telling me about this Velvet Underground kind of trippy song, ‘Linda’s gone’ which he really loved but that in the end they had to leave out mainly for time reasons. His description got me very intrigued so I am pretty happy to see the song was finally included on the new EP. “Both Christian and I wanted it on Indigo Meadow, but it was longer and jammier than the other tracks, more similar to our first records”, Alex confesses. “The original version was actually fourteen or fifteen minutes long and it would have taken too much space on the record so we cut it down shorter which is fine as it just got more concise.”

The title of the new EP sounds like a sort of thematic sequel to Indigo Meadow. “One thing people probably don’t think about is that Clear Lake, Iowa is where Buddy Holly plane crashed”, Alex explains. “Also Clear Lake City is where Christian and I are originally from, so that seemed like an appropriate second release name. I think the two titles go well together.”

I am curious to know if they are planning to make any video for any of the new songs and Alex tells me that someone actually just made a video for ‘The Flop’ and another one for ‘An Occurrence at 4507 South Third Street’ is in the making. “Videos are quite difficult for me to wrap my head around, I am just not good at coming up with ideas for them”, he adds.

Since 2008 The Black Angels have been curating the annual Austin Psych Festival which, started as just one day event with local bands and now running over a three day weekend, has gradually grown into one of the most interesting music festivals in the States, hosting acts such as Brian Jonestown Massacre, Black Rebel Motorcycle Club and Clinic. Since last year its French edition (Levitation Festival) has been held in Angers in September and there have been talks about an upcoming Psych Festival in Melbourne, Australia as well. “We are probably going to do it next year as it requires a proper planning”, Alex reports. ”It has been a bit difficult to arrange mainly because it is quite expensive to fly every member of every band in and we are still trying to figure out how to finance something like that”. In the meantime the possibility of a Psych Festival in Portugal has also been considered. “Our business partner Rob Fitzpatrick has been talking to a production team over there”, the frontman reveals. “I haven’t been completely caught up on everything yet but there are some rumours going on between me and my business partners that there are some people interested over there.”

Finally Alex and I ended up discussing all the records that for different reasons have had a sort of impact on his life. Here is what he shared:

The first record he bought: The Beatles - Abbey Road
“I remember listening to my parents’ records and Abbey Road really spoke to me. Songs like ‘Come Together’ and ‘Something’ that my dad used to play in the car all the time made me want to have it so I think that was the first Beatles record I bought and then I discovered the rest of the catalogue through that. That was probably early 90s.”

The record he spent the most money on: The Black Angels - Phosphene Dream
“That definitely cost us a lot of money [laughs]. Other than that there are some weird rare psych records that don’t even have a name I spent a hundred bucks on. Of all of us Christian [Bland] and Jake [Garcia] are probably the biggest record collectors. We always look for new records to study.”

The record he has always wanted to buy but he can’t find anywhere: Yahowha - Yahowha 13
“Father Yod was the spiritual leader of the cult/commune Source Family in the 70s and they were making this super cool music with minimal, primal drumbeats and very trippy vocals that was more chanting than anything else.”

The record his parents didn’t want him to listen to: Digital underground - Sex Packets
“That is a very cool, provocative rap record from the 90s. There is this song in particular called ‘Humpty Dance’ that was getting played on the radio and then also ‘Freaks of the Industry’ which is a slow sexy story. As a young kid I thought that was really cool and dirty, but my parents didn’t approve of the lyrical contents much.”

The record that reminds him of his first love: Mazzy Star - So Tonight that I Might See
“Other than Joan Baez and Judy Collins that were folk women from the 60s, that was a modern take on a woman personality and perception on how she saw the world. So to me that record was almost like learning how to relate to women and the way they can feel. And to me Hope Sandoval’s voice has always been very attractive.”

The record he’d play on the first date with someone he wants to seduce: Suicide – Suicide
“That’s a make or break!”

The record that made him decide to make music: The Velvet Underground & Nico - The Velvet Underground & Nico
“That was because in a way it’s very simple. Back then I was afraid to learn how to play music when everybody around me could play and very good, but that record somehow felt so relatable to me who was someone that didn’t know anything on how to play any instrument. It’s actually a complex record but it seemed so minimal in terms of skills level.”

The record he wishes he had written: Silver Apples - Oscillations
“Back then that seemed way ahead of time!”

The record that he used to love but now he's embarrassed to admit: Vanilla Ice - To the Extreme
“When that album came out there seemed to be at least three or four great songs on it and back in the days it was a pretty good record especially because it was cool that it was a white guy doing it which made it even more interesting.”

The record that he dislikes the most and every time he hears it just gets on his nerves: Whitney Houston - “I will Always Love You”
“They were playing that song on the radio a lot. I first thought it was cool but then I got so tired of it. I love the Dolly Parton original version but it was the Whitney Houston version that after the movie Bodyguard got play so many times that I just couldn’t take it anymore.”

The record he’d take to a desert island with him because he’d never get tired of listening to it no matter what mood he is in: The Beatles- Sgt. Pepper’s Lonely Hearts Club Band
“That record is so all over the place. I would probably go loony on a desert island so I figure I might as well take something crazy with me.”

His favourite chill out record: Huun-Huur-Tu – If I’d been born an Eagle
“It’s a Mongolian record from the late 90s my ex-girlfriend turned me onto. I used to listen to it a lot while on tour whenever I wanted to relax.”

The record he would play to get himself motivated
1. Buddy Holly -The Buddy Holly Story
“It’s such an incredible record. It’s amazing how talented he was at such a young age and so tragic that he died so young.”
2. Paul Simon - Graceland
“Every time I put it on it just makes me want to be so creative, paint, draw and make music.”

The record that can move him so much to make him cry:
“There are quite a few actually and I can’t just pick one. It could also be that one record can make me happy one day, and then the next day it just makes me sad. But I think most music has that power, that’s why music is so beautiful.”

The record he would choose to best represent his personality: Dr. Octagon -Dr. Octagonacologist
“That’s a little nugget that my sister turned me onto. It’s like cool psychedelic hip hop with very interesting lyrics. It’s a little bit futuristic for the mid 90s.”

The last record he bought: Subterranean Sounds of Kazakhstan
“It’s a weird record I found last time we were on tour, I think when we played at the Coconut Festival. I was in this cool shop with friends and there were a lot of records from the Middle East. I took a bunch of them and that was my favourite one.”

The record he is most looking forward to: The next Radiohead record
“I always wait for their next record. It’s a band I have always been very excited about as they are always so innovative.”

Email ThisBlogThis!Share to TwitterShare to FacebookShare to Pinterest
Tags Interviews, The Black Angels