IN CONVERSATION with MARK LANEGAN 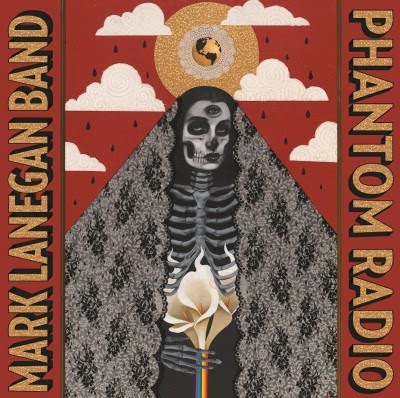 Starting out as vocalist/guitarist of grunge band Screaming Tress in the mid ‘80s, the legendary Mark Lanegan began his solo career with 1990's The Winding Sheet, which, featuring a sound steeped in blues and Americana traditions, represented a drastic departure from the more energetic music of his then main band. Following the dissolution of Screaming Trees in 2000, Lanegan played in Queens of the Stone Age for five years and, while continuing to release solo records as well as collaborating with many musicians, subsequently formed the Gutter Twins with Greg Dulli and put out three albums with former Belle and Sebastian’s singer Isobel Campbell.

Following 2012’s Blues Funeral and Dark Mark does Christmas EP, last year saw him collaborate with British musician Duke Garwood (Black Pudding) and Moby (the Record Store Day 7" 'The Lonely Night'), among others, contribute to the new record of his ex-bandmates QOTSA and release the covers album Imitations.

Lanegan is now back with the new full-length Phantom Band, which, preceded by the release of No Bells on Sunday EP in late August, is coming out on 20th October via Heavenly Records. I caught up with him on the phone to discuss both records.

All the new songs, which continue the electronic direction that characterised Blues Funeral, were sort of written and recorded around the same time, with the help of producer Alain Johannes. “I just took my time because Alain had his own studio, so we would leisurely work a couple of days a week, only a few hours a day”, Mark says of the writing process. “I would compose a new song, go record it, and when that was finished, go back to write another one.”

The collaboration with Johannes has been cooking since 2004 and Lanegan believes the Chilean producer has had a huge impact on his music. “I have been blessed to be able to work with great musicians and all kinds of people, but my relationship with Alain is the most important I have ever had”, the songwriter reveals. “He is very sympathetic to my ideas and can make them come to life really quickly. Thanks to Alain I have been able to try anything I’ve wanted.”

Lanegan’s writing process has changed drastically over the years as, like most musicians that have been around for so long, he has gradually switched from creating music on acoustic guitar and Radio Shack analog tape recorders to using GarageBand on his laptop. Lately, he has also started utilising a phone app called Funk Box, which has all the classic vintage drum machines sounds to play around with for home-recorded demos. “That really comes from the desire to do things differently and try to make music from a different angle more than anything else”, he specifies.

In the press release interview for No Bells on Sunday EP, Lanegan said that those songs were too “goofy” to be on the album. I ask him what he meant by that and he laughs admitting that “goofy” might not be the right word. “I obviously like them or I wouldn’t have put them out. I think I just meant that they didn’t fit with the album somehow. The last proper EP I did was in 2003 before Bubblegum and that was for the same reason, because I just had a surplus of music that I wanted to put out, but I had more than I wanted for my record.”

Still on the subject of the new EP, the artwork is quite minimal and has a sort of wallpaper vibe, which is reminiscent of Blues Funeral’s cover art. “A friend of mine, Alison Fielding, put that together. I am fond of minimal, no graphic stuff like that, and have always been drawn to floral patterns. It’s an element from something of the actual record itself, inspired by a painting.”

Light in the Attic recently released his Anthology Has God Seen my Shadow (1989-2011), however Lanegan is not the kind of person that looks back at the past much. “I am really a hear-and-now type of person, I don’t really like looking behind me and I try not to think of the future either”, he reveals. “That’s the way I am the most happy and comfortable.” He doesn’t feel very nostalgic either. “I surely have happy memories just like any person, but I try not to dwell on them especially the unhappy ones”, he laughs.

Between solo records, side-projects and collaborations, the American musician has made close to 50 records. I am curious to know if there are any that hold a special place in his heart and he confesses that though there have been a lot of records he is proud of, he particularly loves Songs for the Deaf by Queens of the Stone Age, the albums with Isobel Campbell, and out of his own ones, Field Songs and Blues Funeral. “But it’s tough to take a single record and separate it from the rest. I am also very fond of Saturnalia I did with Greg Dulli”, he adds. Having especially loved the Gutter Twins’ album myself, I ask him if there will be another one in the future “Absolutely”, he promptly replies. “Greg and I are both doing our main gig right now, but we are going to make another record together for sure.”

Another interesting collaboration Lanegan has been recently part of is the new Sweet Apple’s full-length The Golden Age of Glitter, on which he features on a couple of songs (“Wish you could stay “ and “Let’s take the same plane”). “Those guys are good friends of mine. I have known J Mascis for 25 years and John Petkovic for over 20. They are all old-timers like me so it was easy and fun”, he says of working with them.

Last year, Lanegan also released Imitations, his second covers album since 1999’s I’ll take care of you. He thinks that somehow revisiting someone else’s music is more fun than playing his own. “There is a satisfaction that comes from doing your own songs but it’s not the same satisfaction that you get when you love somebody else’s songs”, he explains. “I am never going to love a song I did myself the same way I love a song by somebody else, that’s why it’s more fun if that makes sense.” He's usually drawn to stuff that speaks to him on some personal level. "Classically, I have been into music that tells my own stories the way I want them to be told”, he reveals giggling. “Sometimes I like a bit of darkness in it too, but it’s always different and I can’t really say what it is that triggers the spark of interest.”

Lanegan believes that letting the music be its own reward is the main reason why he has been in the game for so long. “If you do that and don’t put expectations on it like ‘if 20 people don’t love my music, then that’s not worth anything’ you are going to be happy", he adds. “But if you aim is that your songs get popular and it’s not your heart speaking for you, then you are not going to be happy. That’s why I’ve never done that and always left the music be enough for me. Anything that comes from music is the icing on the cake, but I would continue making music even if I was the only one listening to it.”

Finally, we discuss the importance of labels nowadays and he tells me that while they may still have influence on some musicians, he has been lucky to always have the creative freedom he has wanted. “Even though I was with Subpop for all those years, my records weren’t the typical Subpop records and I was outside of what they would become famous for. I have been blessed to be on great labels like Subpop, Beggars Banquet and 4AD, and they have always been my partners in planning things and making them happen. Now I am on Heavenly and my relationship with them is great, because even more than my past labels they are creative guys and that is great for guidance in creative areas”

No Bells on Sunday EP is out now. Phantom Band is out on 20th October via Heavenly Records.