IN CONVERSATION with SLOWDIVE

Among all the recent ‘90s band reunions (now so unbelievably in fashion), Slowdive getting back together earlier this year got me especially excited. They have always been my favourite early-shoegaze act, as unlike their genre-mates My Bloody Valentine, Ride, Lush and Swervedriver, they made music that, under its steady haze of melodic noise, revealed melancholic sonorities I particularly related to.

Also, I've always felt they were incredibly underrated and unfairly treated, not only by the British press - which after initially praised them, subsequently condemned them for being self-indulgent and middle class, as well as portraying them as having nothing to say - but also their label (the almighty Creation Records) that forced them to scrap and rewrite all the songs of their sophomore album Souvlaki (1993), and eventually dropped them only a week after the release of Pygmalion (their third and last record),  leading to the band breakup in 1995. 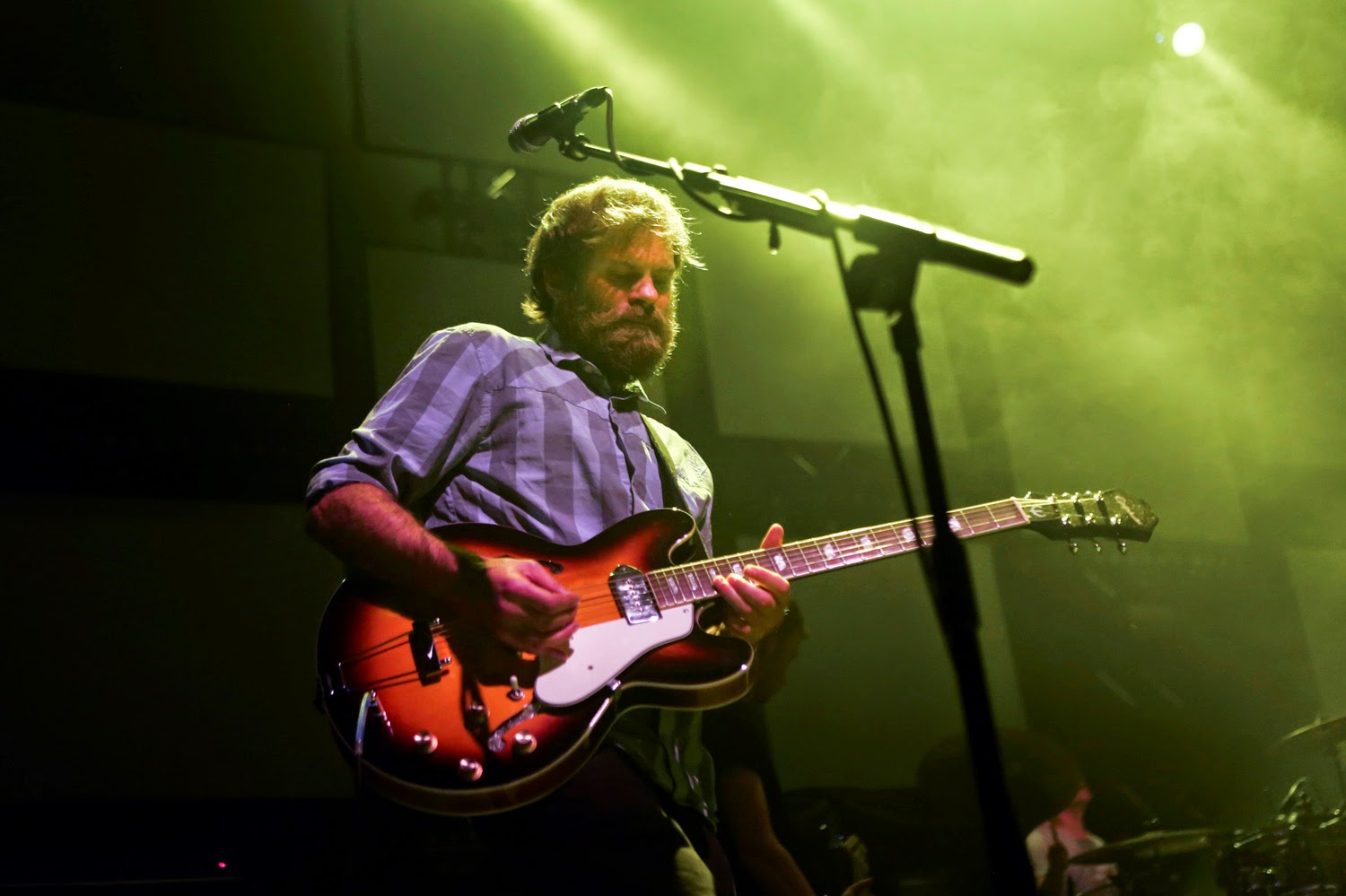 Over the last decade Halstead and Goswell had been repeatedly asked by fans and journalists if a Slowdive reunion could be on the cards, but they had always politely declared that was quite unlikely. Then suddenly, in 2012 Halstead said that his old band could possibly get back together at some point. A Slowdive Twitter account was consequently created in January 2014, hinting at a possible reunion, then on 28th January 2014, it was finally announced that the band had reformed to play the 2014 Primavera Sound, preceded by two intimate London shows, and followed by worldwide performances at twenty-seven festivals and an extended American tour.

Slowdive was almost shocked to see the level of interest there was when they got back together. “I think none of us had much of a clue that the reunion tour would be so successful”, frontman Neil Halstead tells me over the phone from his home in Newquay, Cornwall. Seeing many young people coming to their shows and realising how many new fans the band has made over the last couple of decades has been one of the most rewarding things. “I can see us in the younger audience. But it’s also very interesting to see such positivity from our longtime fans”, he adds. “You connect with them in a different way and you look at them smiling because you realise we have all got older. It’s very nice that they have come out to support us again.”

Playing in more exotic locations like Japan, Singapore, Hong-Kong and Taiwan in particular was an amazing experience for the band. “I had actually played solo shows in all those places, but it was great to come back with Slowdive. We had a fabulous time the whole summer and it has been nice for us as friends to reconnect as well as playing music together”, Halstead points out. “Fuji Rock was a personal highlight. Also the Tapei show was unbelievable. We turned up there but our equipment didn’t, so we had to put a message on Facebook and ask people to bring some pedals, guitars, amps etc. It was very moving to see such a good response from all these kids offering to bring stuff for us, and that was such an interesting way for us to connect with our audience there. It felt like a DIY kind of show.” 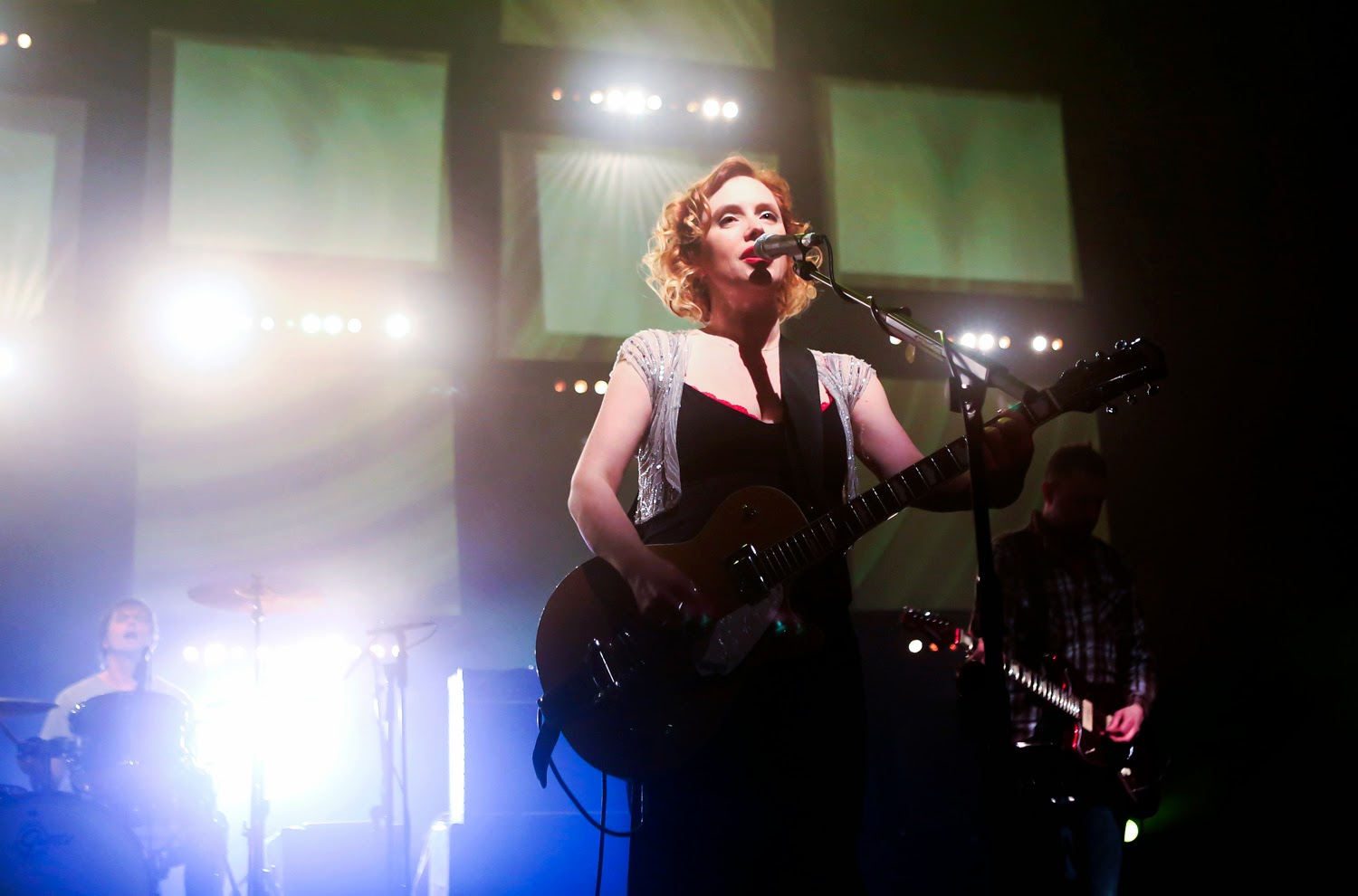 It was during the American tour that the band reached the highest point in terms of performing skills though, playing night after night and making progress with the songs. “Up to that point we had only played at festivals, doing one then we would have a few days off and then on again”, Halstead explains. “At festivals we were also playing slightly different sets, depending on the time we were allocated. We are way more familiar with the songs now, but still enjoying it a lot. In America we took some visual stuff with us too, so there was an extra element on stage which helped the performance”.

Obviously Slowdive reunion presented a lot of challenges too. Halstead had spent the last ten years playing acoustic guitar almost exclusively, so picking up his electric guitar again initially required a lot of work, but it soon turned out being good fun. “It has been great to use pedals and play with volume again. I have been really enjoying it”, he comments. Of course, some songs were easier than others to re-visit. The band chose their debut single “Slowdive” to first rehearse together. “We all thought it would be a simple and good one to start with. It clicked quite quickly, so we all realised we could at least still play that track”, he jokes.

Out of all the songs, the ones from Pygmalion have been the most challenging to perform live. Slowdive last record ended up being a Halstead/Goswell collaboration, created almost entirely from samples and loops, and very different from its more guitar-oriented predecessors, Just for a Day and Souvlaki. According to Halstead, Souvlaki is the album that best represents them as a shoegaze band. “Pygmalion has more electronic influences, it’s way more minimal and probably far more experimental, but it’s actually my favourite”, he carries on. “Having said that, each Slowdive record is its own thing and representative of what we were at that time. We were constantly changing, we were always a band in flux.” 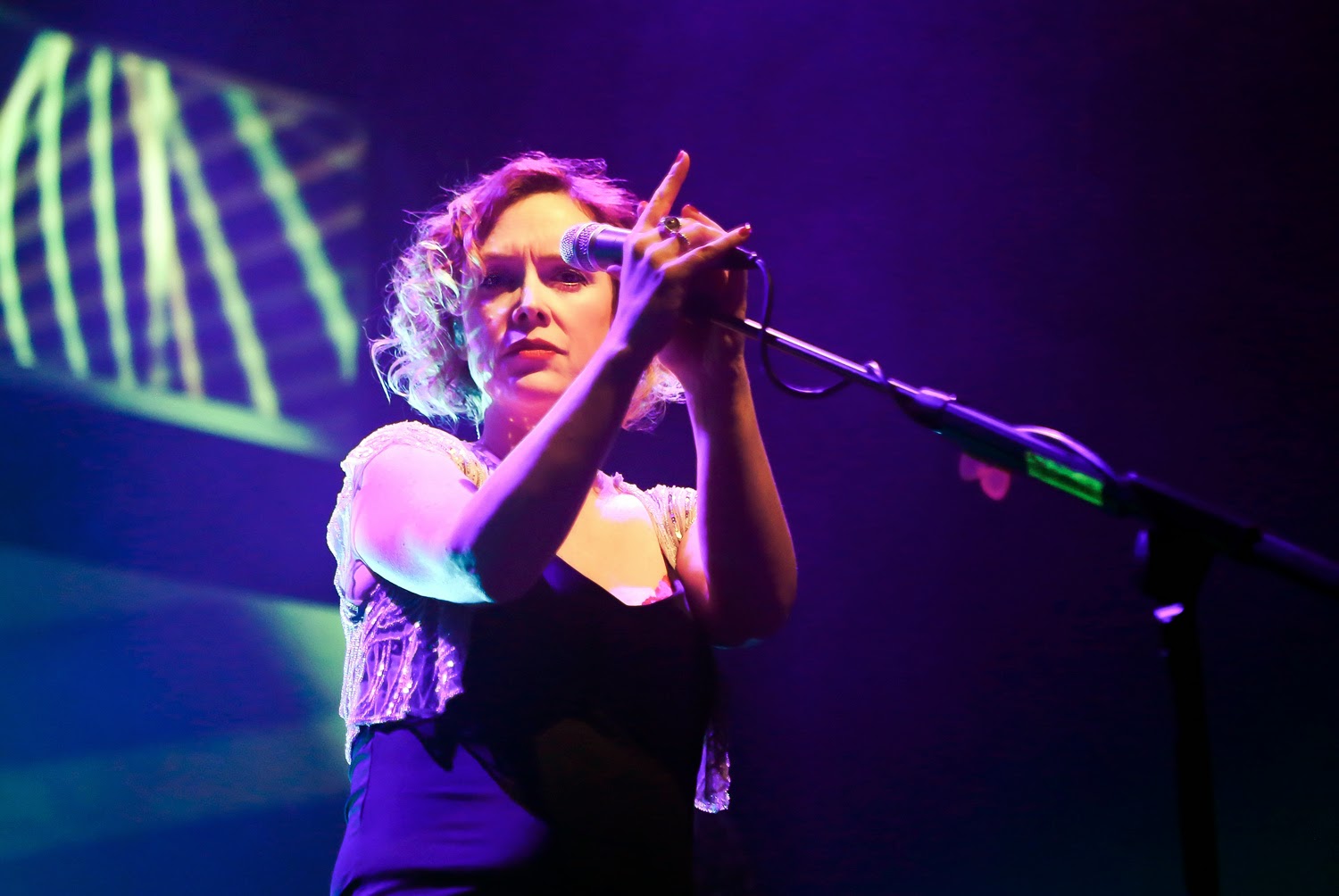 So far only three tracks (“Crazy for You, “ Blue Skied An’ Clear” and “Rutti”) from Pygmalion have been played during this reunion tour, the ones that are a little easier to perform in a live setting, probably because they have a slightly different structure form the rest of the album. Halstead believes that Pygmalion would be very interesting to play in its entirety at some point. “That would definitely require a lot of work though, because we really don’t use backing tapes, but if we wanted to do that we would probably have to incorporate some of that stuff into our shows.”

When Slowdive started making music back in the ‘90s they didn’t take the whole shoegaze thing too seriously and weren’t aware of contributing to a revolutionary genre that would become so popular years later. “We were just thinking of it as a sort of space rock and that’s what we believed we were doing”, Halstead confesses. “Obviously, we were massively influenced by My Bloody Valentine and Cocteau Twins, who were the bands that inspired us to form Slowdive, and in a way we were conscious of being grouped with bands like Chapterhouse, being from the same town, and also Lush and Ride. But we thought we were mainly doing our own thing.”

For Halstead it was interesting to see shoegaze getting so successful a decade or so later, especially considering how little love the early-‘90s UK press was showing to it, preferring the more accessible (and 'working-class') Britpop that was happening at a similar time. “Rachel [Goswell] and I had been making acoustic music for a long time; Simon [Scott] much more experimental stuff, sort of ambient and electronic; Nick [Chaplin] hadn’t been doing any music at all and Christian [Savill] only occasionally, so none of us was in the shoegaze scene anymore. I am not sure what are the reasons of such a recent shoegaze revival, but it has been such a pleasant surprise to see that genre becoming so influential years later.” 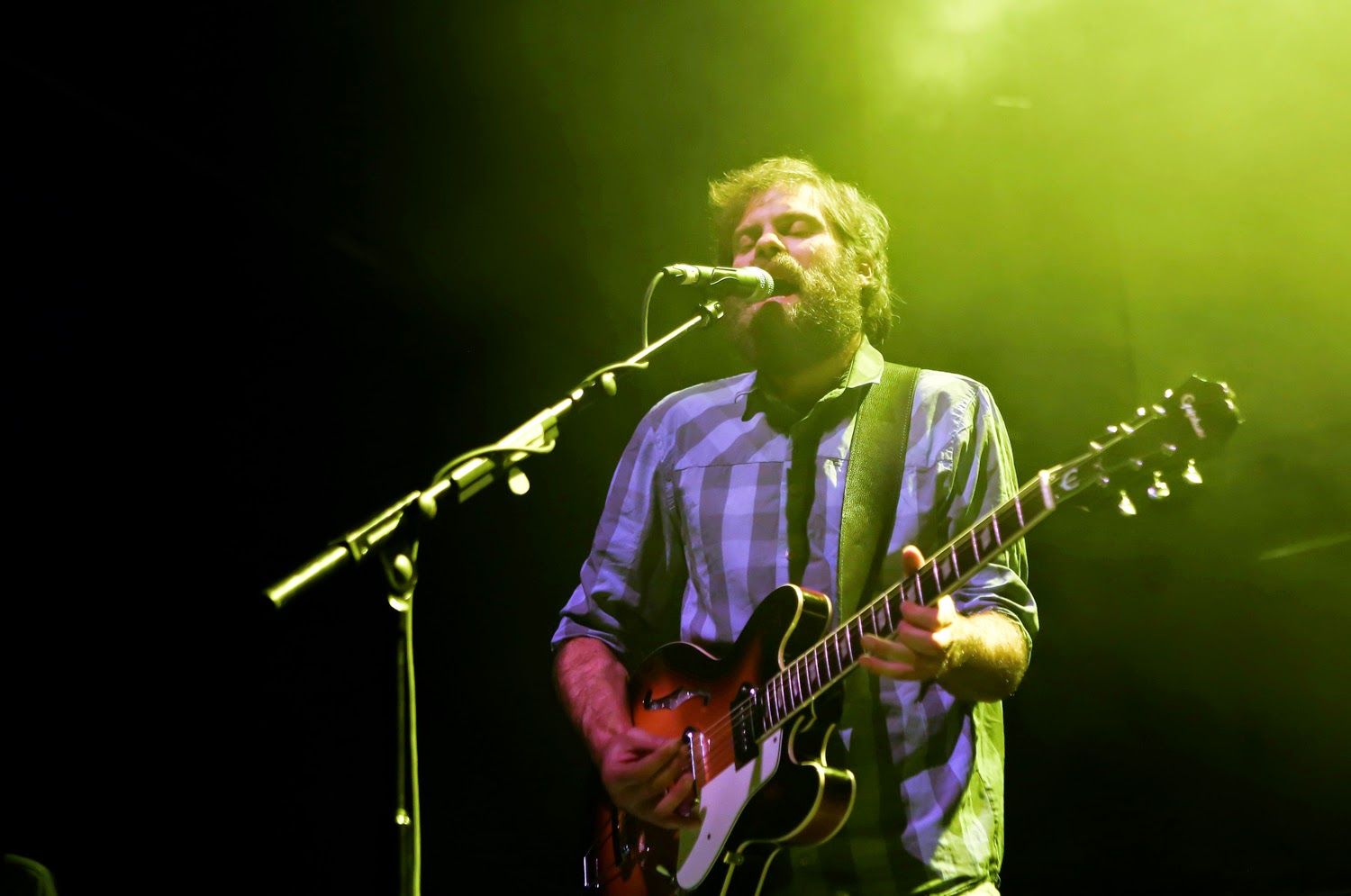 general, we discussed the influence of media on people’s taste and how it has drastically changed over the last decade. “When we were kids and were putting out our first records, in England NME, Melody Maker and Sounds were the only three music publications that people would read. They were the Bible to discover new music, so if you could get a good review on one of those, that would really help you, and if you could get a good review on all three, you would start selling records and lots of people would come to your gigs. Initially that was how we got an audience as we were championed by all three of those papers for probably the first two or three years that we were together. Then things changed. Today it’s all about social media and blogs, and it’s way more diverse as there are a lot of different people writing stuff. It’s not such a monopoly anymore.”

If Halstead could change anything of the first years Slowdive were playing music together it would probably be their accountant, who it transpired had been ripping them off and ended up going to prison. They would also probably spend more time recording Just for a Day. “We just went into the studio because Creation Records said we needed to give them an album, so we just went in unprepared and six weeks later we were done writing and recording.  We gave it to them, but I regret that, as we could have probably made a better record at that point. Also I don’t know why we decided not to include any of the EPs we had done on it. Had it been a combination of our first three EPs, it would have probably been more representative of the kind of band we were at that point.”

I finally asked Halstead if Slowdive has written any new material yet and he (thankfully) tells me that the plan is to start working on some new tracks soon. “We have some time booked in January. We’ve deliberately stayed away from it till now, as we wanted to first concentrate on the old material. But now writing new music is the next challenge for us. It’ll be fun and hopefully rewarding.” I can't help but wonder what direction the band is going to take, whether the shoegaze of Just for a Day and Souvlaki, the experimental sonorities of Pygmalion or the folk-rock of Mojave 3 and both Halstead and Goswell solo projects will take centre stage. “We haven’t discussed anything yet as that’s not really our style”, the Slowdive frontman promptly reveals. “I don’t remember ever having a discussion about what kind of direction the band should go in. We never started with a fixed idea in mind, but we would always let our records define themselves. So now, we are just going to see where the music is going to take us. I think the possibilities are more interesting when you just walk blindly. It’s quite daunting but also quite exciting.” 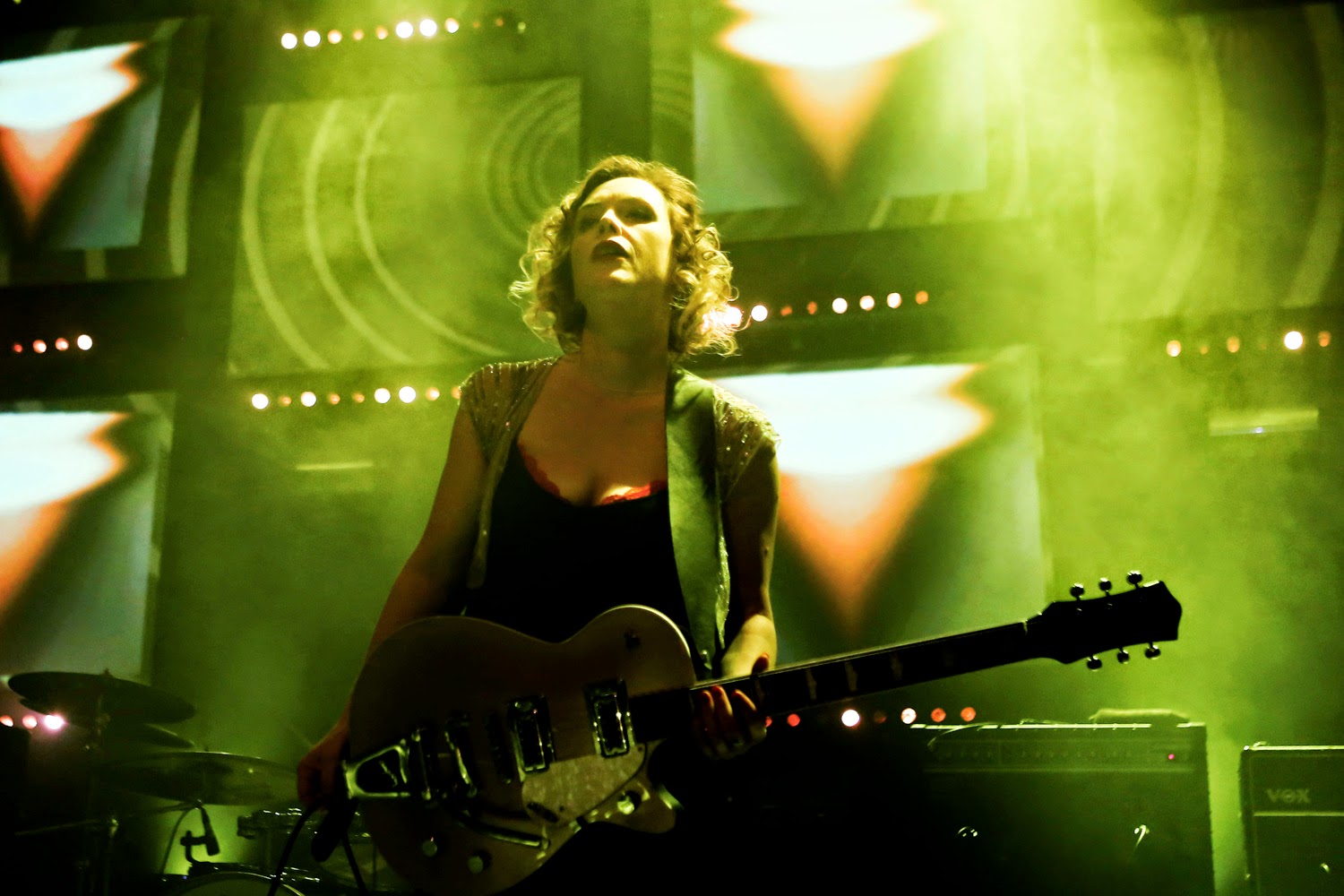 More photos of Slowdive show at The Forum, London here