Combining Surf, Exotica, Garagepunk, 50's R&B and Twisted Freak-a-Billy, Oh! Gunquit are one of the most interesting and unique London musical acts of the last couple of years.

The nucleus of the band started in 2010 when neighbours Tina Swasey (lead vox/trumpet) and Simon Wild (guitars/vox) met frequenting a Camden DJ cellar club.  Evolving into a five-piece over the years, Oh! Gunquit released a couple of 7"singles before recording their debut full-length, Eat Yuppies and Dance, which is out on the 21st March via Dirty Water Records.

The album is a superb showcase of frenetic guitars, pounding snare drums, vibrant exotic sounds and kitsch humour that catapult you into a world of B-Movies' adventures.

I caught up with Tina and Simon to discuss the band's story, their debut record, life in Camden and their worst fashion secrets.


How did you two meet?
SIMON: We met at our local pub, the Constitution in Camden. We were going to the Nitty Gritty club nights there, and then one night, while we were walking home, Tina sang a song and we decided to start writing music together. Then it developed from there.
TINA: Sam, another neighbour at the time, had a drum kit and she had played in a band a bit before, so we decided to do a little three-piece together.

Do you remember what was the first band you realised that you both loved?
TINA: I think we just realised that we liked a certain type of music that might be loud, fuzzy, garage-y, and throbbing. I grew up listening to a lot of punk, I went to many punk gigs back in the days, and with my friends I did a few shows at this place called Garageland in Denver, Colorado, where I am from originally, to just go to the other side a little and enjoy putting things and crystalizing them in a band. 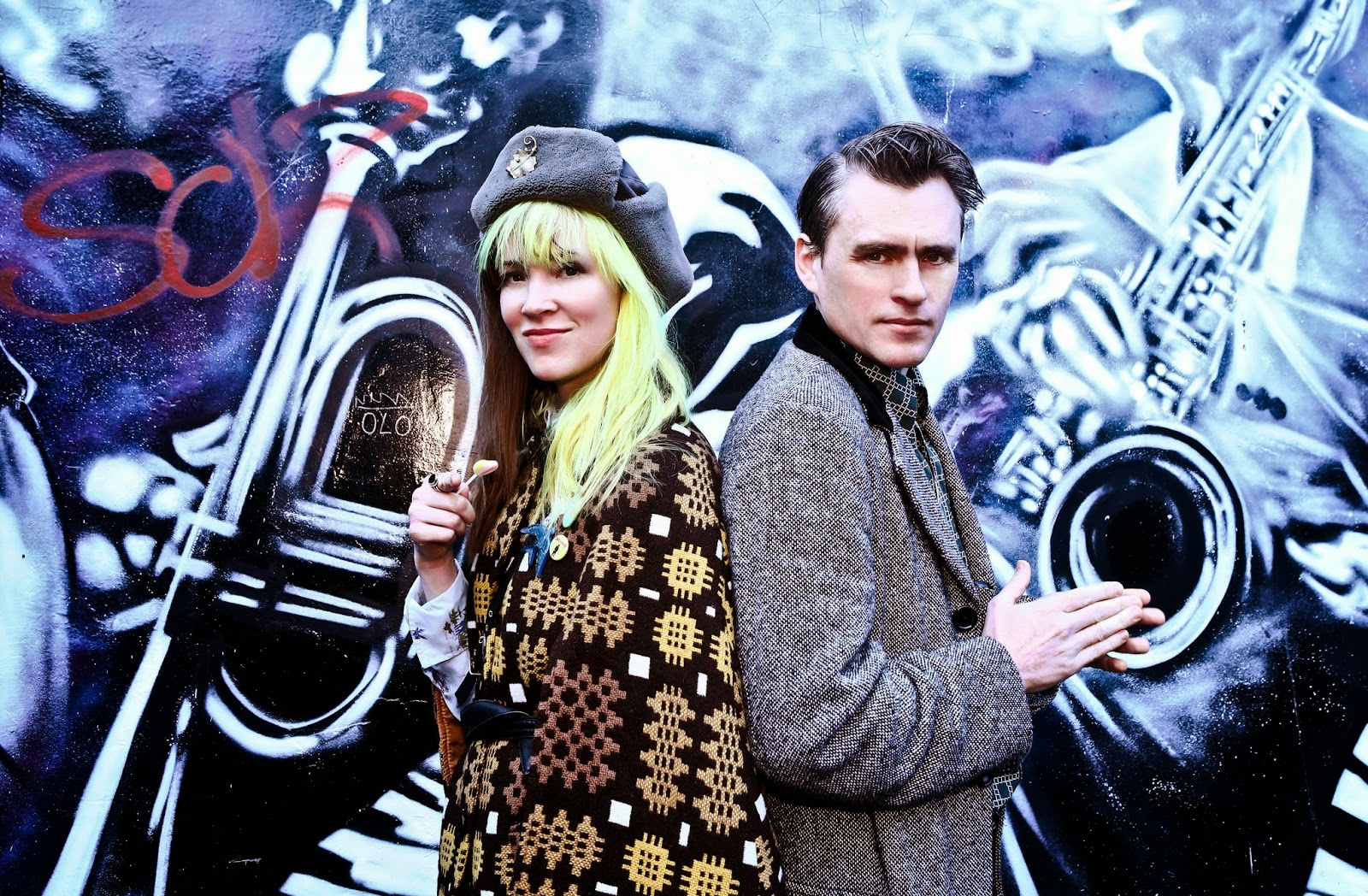 From a trio you then developed into a five-piece. How did you meet the rest of the band? SIMON: We had a few lineups as a three-piece, but then we wanted to add a saxophone to have an exotic kind of sound, sort of dirty, sexy R&B thing, so we got our mutual friend Kieran Ridgers in the band. We played as a four-piece for a while, with a few different drummers, till Alex De Renzi joined us permanently. Finally, while recording the album, to make the sound a bit fuller we got another mutual friend, Veronica Arcilla, to play bass, and then she stayed.

What is the story behind your band’s name?
SIMON: It’s a play on the name of a place in Maine, Ogunquit, which was an artists’ colony in the 1800's named after the Abenaki Indians partial to the idea of all gun quitting.
TINA: That is one place where I would go to every year and I consider home in spite of having moved around quite a bit. My dad is quite bad at telling jokes, which I think I’ve inherited as well, and he once told this joke about how that place got its name: there was a French fur trader that spent the whole winter there with the Indians, and to thank the chief he gave him a gun, and then went his way up to the French Canadian territories trapping beavers and stuff. When he came back down, he saw the chief holding the gun over his head saying "Oh gun quit, oh gun quit" because the gun had broken, and that’s how the place got its name.

Your debut record, Eat Yuppies and Dance. is coming out on the 21st March. Tell me a bit about the production. Did you record it all analogue?
TINA: Yeah, we recorded at Gizzard studio in Hackney Wick. There is a crazy evangelical or Lutheran church where people are singing and playing while you are recording, so it’s a very nice atmosphere. The producer, Ed Deegan, was very helpful at putting the tracks down, he is an absolute wizard.
SIMON: Yeah, Ed is great. We decided to record there because we had a lot of friends that had recorded there already and Ed is into the same kind of music we make. Also they have lots of great old gears there, like organs and great amps.

Why would you “eat a yuppie”?
TINA: It’s the idea of this kind of aspirational society of being careerist and getting a mortgage, that old outlook on life which is just not conducive to society on a long term at all. And you just want the society to digest those people and spit them out properly.

What is the idea behind the album cover?
TINA: We were at a gig in a crazy old warehouse in Artwerp and there was this guy who had a art 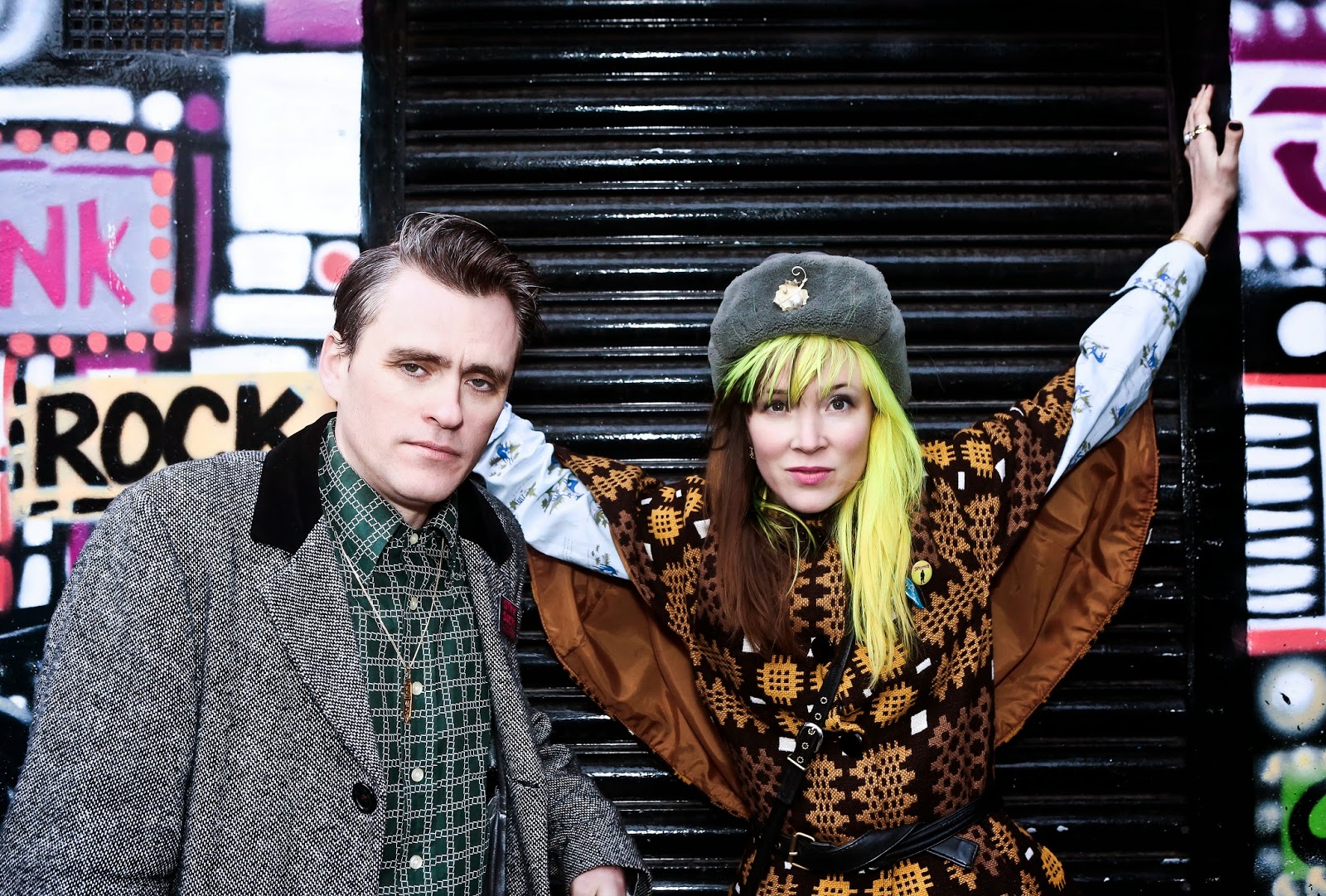 show upstairs and sat around with scissors, and people were giving him interesting pictures of things that he was continuingly cutting and putting together in crazy ways, putting them on top of paintings and collaging things.
SIMON: I think the story is that he had found a few old paintings and he decided to subvert them with clashing images to create a strange collection of styles. So our idea was also to cut out different types of images related to some of the songs.
TINA: Anyone can cut down pieces and reconstruct them visually, relating to certain emotions, without necessarily being a painter or a drawer.

Are there ever sounds you hear in nature or elsewhere that you'd like to incorporate into a song?
TINA: Yeah, for instance you hear songs that have heart beats incorporated and I always go for them!
SIMON: The tube train goes underneath the flat, so we should probably incorporate that into a song.

Tina, you are originally from the States. How do you enjoy living in London?
TINA: I say I am from Denver, Colorado, though my family moved every two years in the States because my dad was in the military, but my mom is from Ireland. As for London, I initially struggled to stay here for a year or two, but then I finally got it, I figured out how to use public transport, find some work and meet some good people. You are always surprised by the different kinds of people, food and culture. It’s like the whole world on your plate in a city.

You guys live in Camden, which historically used to be the hub of the London music scene, whereas now everything seems to happen in Hackney. How would you compare the two?
SIMON: Camden glory years in music are sort of gone, as lots of venues got corporatised and lots have moved, because nobody can’t afford to live there anymore, so it’s not the same vibe as it used to be. But there are still some old coops trying to exist, though you have to search a little harder to find those pockets of interesting things.
TINA: Yeah, you have to go where it’s cheaper and cheerful when you are young, and in a big city you end up where you can afford to live. But Camden has a lovely history of some of the old revolutionary groups and also blues-based areas, and it still has a nice vibe.

Tell me five things you'd need to survive on a desert island.
TINA: A good cutting tool, a very large flint stone to light fires, though maybe matches would work better. Then goats, as you can make instruments and milk out of them. Then chickens. as I love eggs. A pair of surf boards as well. Ok I have done this too seriously….

What is your worst fashion secret?
TINA: I bloody love 1970s huge pointed collars. Sometimes they even hit you in the eye when it’s windy and you say “yep, that is my collar”.
SIMON: Bad underwear I bought at Primark.

What colour?
SIMON: it’s not about the colour, it was more a panic buying….

What’s next for Oh! Gunquit?
SIMON: Just playing more shows around. Along with two London shows, we are playing a couple of dates in France soon and we are in the process of adding some European dates as well. We are also talking to Detroit garage-rock producer Jim Diamond and hopefully should record with him this summer. 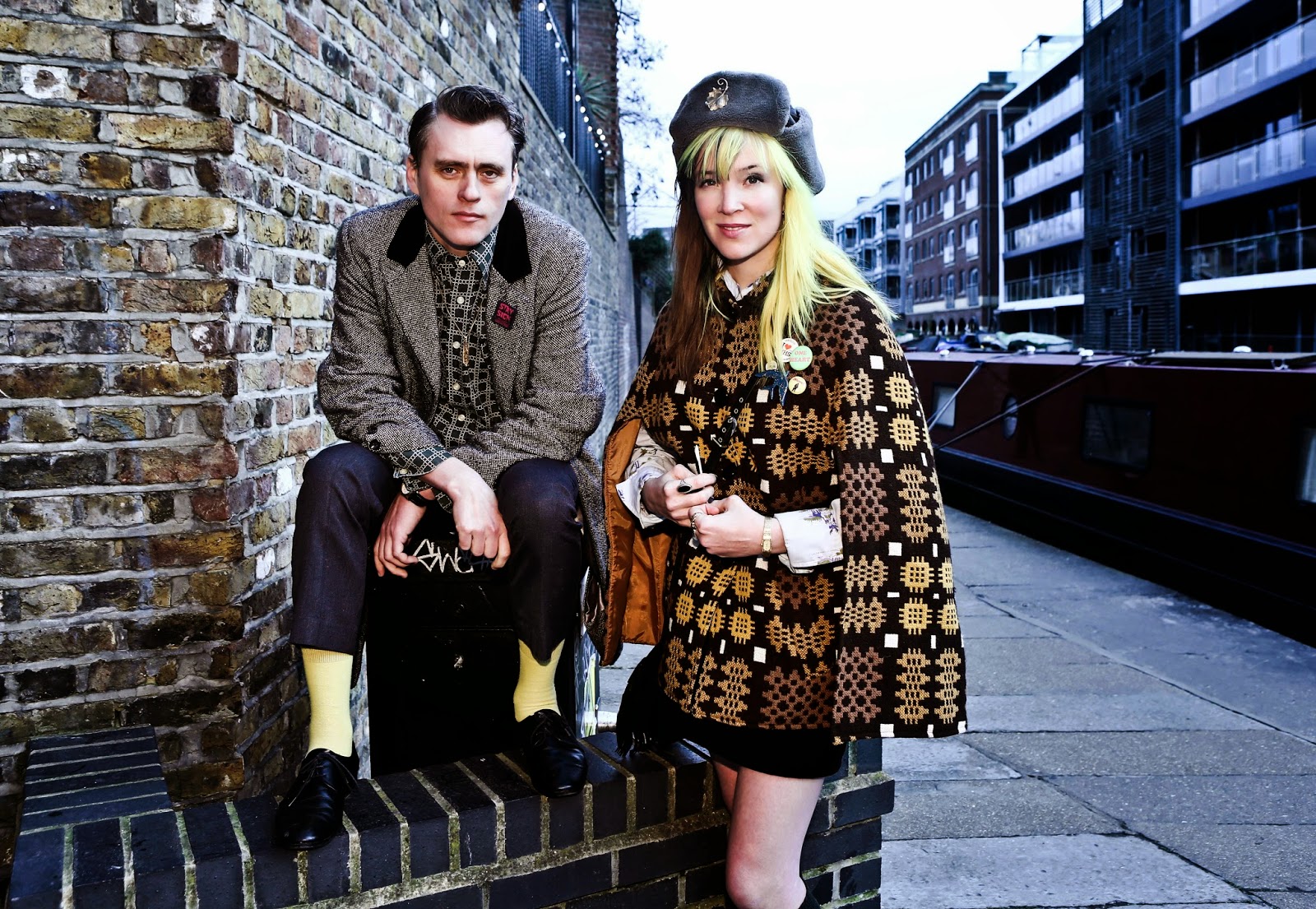 Oh! Gunquit are playing at Blues Kitchen on the 19th March and at Elixir Bar on the 21st March.

Eat Yuppies and Dance is out on the 21st March via Dirty Water Records.