IN CONVERSATION with BABES IN TOYLAND

Babes In Toyland bassist on the reunion, Minneapolis, Riot grrrl and her upcoming memoir.

Based in edgy Minneapolis, between the late-‘80s and the mid-‘90s, vocalist/guitarist Kat Bjelland, drummer Lori Barbero, and bassist Maureen Herman (who joined in 1992 to replace original bassist Michelle Leon) made up one of the most pioneering acts of the grunge era, the punk/ sludge-rock trio Babes in Toyland.

Highly praised by the likes of John Peel, who named the band’s debut Spanking Machine his favourite album of 1990, and Thurston Moore, who invited them to tour with Sonic Youth in Europe, the power three-piece graced the covers of Alternative Press, NME, Entertainment Weekly, played the Reading Festival three times (1991, 1993 and 1995), Lollapalooza once (1993), and featured in numerous documentaries including 1991: The Year Punk Broke and Not Bad for a Girl.

After putting out three albums (Spanking Machine, Fontanelle and Nemesisters) and a couple of EPs, sadly the band went on hiatus, eventually breaking up in 2001, leaving a huge legacy behind them and continuing to be one of the biggest influences for dozens of all-female rock bands. 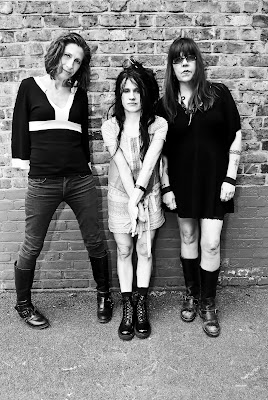 Fourteen years later, the Babes announced they would get back together to play what initially looked like just a couple of shows in California last February, but has now turned into an extended American and European tour. “I didn’t have any contact with Kat and Lori for a very long time”, Herman, who actually left the band in 1996, tells me in the dressing room of Shepherds Bush Empire, where the band is about to play their first London show in eighteen years. She is still the same pretty, sophisticated, glamourously dressed woman we remember from the ‘90s. She is also unbelievably friendly and communicative. “It wasn’t until 2006 that Lori and I reconnected, and then a couple of years later I started calling Kat, leaving her messages till she finally called back. “

Herman had never planned to be a musician, as she initially wanted to be a writer, but, hailing from Illinois, she ended up in Minneapolis, where the then-huge art and music scenes played a key role in making her become the person she is today. “Everybody I knew at that time, from 1986 to 1999, was either in a band or was a painter or a writer, and not just as hobby, they were serious artists. The city itself was really strongly supportive of the art scene, taking artists more seriously than in other places, and art was seen as a viable career. Before joining the band, I didn’t know how to play any instruments, but there were so many weird creative projects to be involved in, so when my roommate moved out of town and left me his drum kit and bass, I started playing.”

After leaving Babes in Toyland, Herman stayed on the fringes of the music industry, first working in journalism, management, production, and then in the mid-‘00s ended up at a social media music platform named Fuzz, employed by ex-Googler Chris Skarakis, with whom she later co-founded the non-profit venture Project Noise Foundation. “I was really done when I left the band as at that point I had toured for over five years, being on the road at least nine months of the year. But I missed the girls and there would be times when I would think that only they would understand, and I would miss that we couldn’t remember together how much fun we had had. “

In 2006, while Herman was working in social media, lots of Babes’ fans were finding her first on MySpace, and as some of them were very young and had never got the chance to see the Minneapolis trio live, that is when the idea of the reunion first came to her mind. “Back then I wasn’t in touch with Kat yet, but when I saw her in person for the first time after all those years, within just five minutes she asked me if I wanted to play again, and I immediately said yes”, the bassist recalls.

The reunion was made possible thanks to Skarakis, who, together with two other ex-Google
employees, formed the LLC Powersniff specifically to sponsor the Babes' return. “Chris [Skarakis] was constantly bugging me to get the band back together, saying that if I ever managed to, I should let him know if he could help, and when we started talking about a possible reunion, I realised that we did need some funding to fly us to practice together”, Herman explains. As she now lives in Los Angeles with her daughter, who is still only twelve, it would have been hard for her to travel to Minnesota to rehearse with Bjelland and Barbero, so they all agreed to find a practice place in LA. “Two days after I contacted Chris to ask for help, he emailed me back saying that he was going to start a company to finance all this!”

Herman hadn’t played bass since the ‘90s, in spite of all the pressure Skarakis had put on her by giving her one. “He was constantly pushing me to play again, but I didn’t do anything till Babes in Toyland decided to get back together. It was challenging at first, but I then got some huge help from my friend Tom Morello [Rage Against The Machine, Audioslave], so it wasn’t too difficult in the end.”

Back in the day when the band was at the peak of their success, they didn’t realise how influential they were being and were mainly seeing themselves as part of a community of musicians. “It was only towards the end that I started to realise it”, Herman points out, “mainly because other bands began referencing us as an influence and also because the fans were telling us that we were helping them get through difficult moments.”

Often mistakenly listed among the riot grrrl bands, Babes in Toyland never wanted to associate themselves with the underground feminist hardcore punk movement, though they clearly were one of their biggest influences. Not only the riot grrrl movement happened in a younger generation and in a different location (Washington DC and Pacific Northwest), but also the Babes’ music was often richer in sonic layers and statements than most riot grrrl groups. “There was something about that feminist movement that I didn’t really like, the fact that the music was being categorized by gender rather than sound. Of course I was happy they saw us as an influence, but none of us never really identified with that”, Herman candidly admits.

The Minneapolis trio were the first of their female contemporaries to sign to a major label in 1991, but, contrary to what most people may believe, that didn’t result in a loss of creative freedom. “Thanks to Tim Carr, our guy at Warner Brothers, we were given absolutely complete freedom and we took it. I remember our A & R person dropping in at one of our practices in Lori’s house once, and while Kat was busy replacing a string I said to Lori ‘let’s start to hit it’, so we began screwing around, playing what I thought a pop song sounded like. But Kat asked us to keep playing it, and it eventually became ‘Sweet ’69!!’” the Babes’ bassist recalls, still amused.

According to Herman, the band were at their happiest in 1993, the year where they played Loolapalooza and Reading festivals, constantly on the road in support of Fontanelle, by far their best selling record as yet. “We were just going, the tour was really fun, we had an amazing crew, a good soundman and the tour manager was actually the same that is touring with us now. All the pieces were together and everybody was very functional and getting along.”

Along with various documentaries, the band’s first years are profiled in Babes in Toyland: The Making and Selling of a Rock and Roll Band (1994), a book by Neal Karlen (a journalist for the New York Times and Rolling Stone), which unfortunately was never supported publicly by Bjelland, Herman and Barbero, as not accurate. Very close to his deadline, apparently Karlen lost the interviews of Herman, Michelle Leon (the original Babes’ bassist) and some of Tim Carr, so when he didn’t have information he made stuff up, obviously taking away the credibility of the story. “For instance, my boyfriend at the time was the bass player of the Jesus Lizard, but in the book Neal says he was an accountant. There are chunks which were just filled in created by his mind, and when he quotes me, most of the times he makes me say such embarrassing things that I would have never even thought of saying”, Herman comments. The band was actually sent a rough copy of the book for approval, but too close to the deadline to make any changes. “After reading it, I called him to tell him there were pages he really needed to change, but he said it was too late because if he hadn’t delivered the book in time for the deadline he wouldn’t have got the money. He was just really irresponsible, because he should have given us time to take a look and make the right changes. It was very disappointing as we let him in the studio with us and he was my friend. “

I finally asked Herman the question I am sure everybody is dying to know… have the Babes started working on any new material yet? “At the moment this is already a lot, touring, playing shows and getting everything going, but it seems that people are really interested in that. There isn’t any actual plan yet, though it is definitely a possibility.” But that isn’t the only good news, as Herman is also currently writing about her life for her first book, It's a Memoir, Motherfucker, for Macmillan's Flatiron Books imprint. “It was due May 1st, but as I didn’t meet the deadline, I got an extension to July 25th. We are not touring in July and my daughter is staying with my mum in the Midwest, so the plan is to spend the month at home alone to finish the book.” I think I am officially excited! 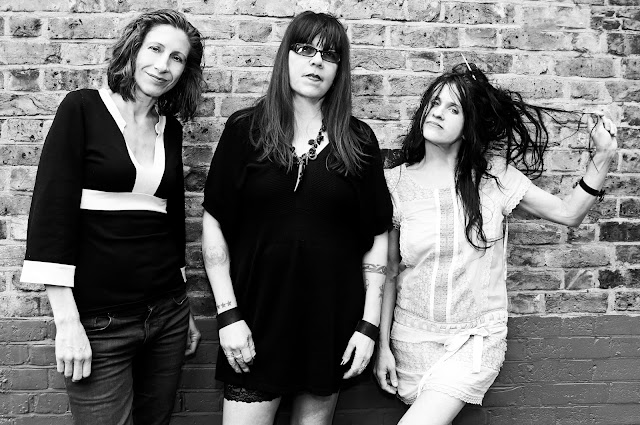 Email ThisBlogThis!Share to TwitterShare to FacebookShare to Pinterest
Tags Babes in Toyland, Interviews