IN CONVERSATION WITH MARK LANEGAN

Mark Lanegan on Thousand Miles of Midnight, collaborations, art and how little attention he pays to what happens in the music industry

It is almost impossible to keep up with the amount of awesomeness the legendary Mark Lanegan has been releasing since the mid-‘80s…. Between solo records, side-projects and collaborations, as he reaches half a century in age, the American musician has made close to 50 records.

Come to fame as the frontman of grunge band Screaming Trees in the late ‘80s, after their break-up Lanegan found himself concentrating more on his solo career, playing in Queens of the Stone Age for many years and, among others, releasing collaboration albums with Greg Dulli, Isobel Campbell and more recently Duke Garwood.

Last year saw the release of his No Bells on Sunday EP and the full-length Phantom Radio, which continued the electronic direction that characterised the 2012’s masterpiece Blues Funeral.

I caught up with him before a fantastic show at London’s Electric Ballroom and discussed collaborations, art and how little attention he pays to what happens in the music industry.

Last February Heavenly Recodings released A Thousand Miles of Midnight, an album of remixes of tracks from both Phantom Radio and No Bells On Sunday. Did you get to choose the artists that did the remixes?
We asked artists that we like to do remixes and to use the songs they wanted to do.

Were you happy with the result?
Yes, I like them all. They are all artists I have either worked with before or whose work I really enjoy. The cool thing about asking people to do remixes is that you don’t know what you are going to get. That is the funny part. And I was pleasantly surprised with all of them.


In celebration of Heavenly Recordings 25th anniversary, you recently collaborated with Beth Orton on a cover of “Your Kisses Burn”, the 1988’s duet between Marc Amond and Nico. How was working with her?
Fantastic. She is such a great singer and I really enjoyed the experience.

Still speaking of recent collaborations, for the last Record Store day you released the single "Needle of Death" with Duke Garwood, who is also currently touring with you. Are you guys planning to make another album together anytime soon?
Yeah, at some point definitely yes. I don’t know when, but hopefully someday.

How would you describe the difference between writing music as a solo artist and as a collaboration? What are the challenges and the advantages of both?
When you collaborate you get to see things through somebody else’s eyes, and put yourself in their shoes. The interaction between yourself and another artist whose work you enjoy is what makes music fun for me. Working with someone else, you do different things than if you were left on your own devices. And that is the funny part of creating music. 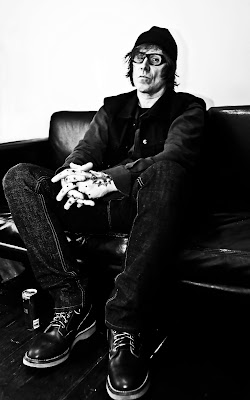 Last time we spoke, you said that letting the music be its own reward is the main reason why you have been in the game for so long. Things have changed so much since you started making music mainly due to the Internet revolution. Today almost everybody can make music, and a lot of it is quite derivative and often very repetitive. Do you ever get discouraged by the current state of the music industry?
I have never paid attention to what happens in the music industry. I have never been interested in what is popular, I have only been interested in what I am interested in. I can’t even tell you what is popular musically right now or at any time, it is just not part of the way I have thought. The music I have always enjoyed listening to has never been commercial. So I guess there is nothing for me to be discouraged by. I have always been lucky enough to have opportunities to make music, I have only made music that I was able to make and nobody has ever told me to make music in any other way.

You come from a generation when music media had such a huge influence on people’s taste. How important do you think media can still be today?
That has never been something I have paid attention to either. I do interviews because people ask me to, but I never read the interviews or the reviews.

You didn't do that at the beginning either?
No, maybe just when I made my first record in 1986… I remember reading reviews back then and being interested in what people thought, but I quickly came to realise that reading about what I had created, whether it was positive or negative, didn’t make me feel good and didn’t do anything for me as far as an improvement, therefore it was just a waste of time.


Is there any other form of art you are particularly drawn to and have ever considered making?
I am interested in a lot of other arts, but more as a fan. I am a fan of certain painters, filmmakers, and a lot of art forms, but music is the only form I am active in.

When was the last time that a piece of art, whether a painting, a book, a film, really moved you?
I am impacted by art daily. I have artworks in my house that I enjoy looking at, watch movies all the time and almost always reading something. But the older you get the less often you are hugely impacted by something. When I was younger everything was new so those moments happened more often, whereas nowadays not so often anymore, though from time to time I still see something that blows my mind.

What about sounds? Is there any sound in nature or urban life that particularly inspires you?
No. I enjoy the sounds of the city and nature as much as I enjoy the stillness and quiet. But again, it is not often that you are stuck by any of those sounds at all.

Was there a record your parents kept playing when you were a kid and that you absolutely hated?
My parents actually had very good taste in music and I enjoyed most of the music they were listening to. Now, my sister is a whole different story, as she was listening to lots of records I didn’t like.

What is next?
When I am touring I am in that mood, but I am always writing for the next project. It is a full time job.