IN CONVERSATION with LOU BARLOW

Lou Barlow on his new solo record "Brace the Wave", relocating from Los Angeles back to Massachusetts, his visceral songwriting and the clarity he has been feeling 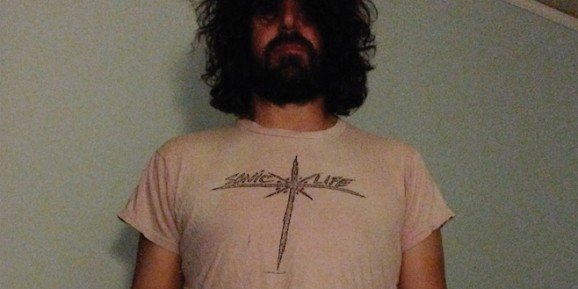 “I feel more clarity right now than I have had in a very long time, probably since I was in my early twenties. I know what I want to say, what I want to hear, I can instinctively feel the shape of the songs and where I want them to go. It is the clarity that comes from the truth of what you feel about things.”, Lou Barlow tells me from his new home in Massachusetts.

After seventeen years in Los Angeles, he moved back to the state in which he grew up and now lives in Greenfield, a small Franklin county town where his parents, sister, ex-wife and kids also are. He recently re-married and is living a whole new chapter of his life. It is a pleasure to feel his optimism and good mood, and always an honour to talk to him.

The bassist/co-songwriter of Dinosaur Jr, and the mastermind of Sebadoh and (the now-defunct) Folk Implosion, Barlow has been one of the most influential alternative-rock musicians of the last three decades. The wealth of credibility he owns not only in the indie-rock scene but also in hardcore-punk, folk-rock and post-punk is by now legendary. Just about any indie-rocker of the last twenty years will mention at least one of the bands he has been in among their main music influences, and if you ask the rock artists of his generation what their opinion on him is, they will all show respect and awe for his incredible talent.

Better known for his work in Dinosaur Jr and Sebadoh, since the late ‘80s Barlow has also been putting out very interesting solo material, first under the Sentidroh moniker and then since the mid 2000s under his full name. If Sentidroh releases were murky, occasionally abrasive, stripped-down home-recordings, the first two solo albums (Emoh and Goodnight Unknown) showcased the more melodic, romantic side of Barlow’s music, backed up by a full band.

Six years after his sophomore solo record, Barlow is releasing the beautiful Brace The Wave, which in a way is a comeback to the early Sentidroh (and Sebadoh) works, mainly based around ukulele, acoustic guitar and his beautifully warm, melancholic vocals, but with the bonus of a crispier, more polished sound.

The album was recorded in six days at Easthampton’s Sonelab studios with Justin Pizzoferrato, the engineer that worked on the 3 Dinosaur Jr ‘reunion’ LPs. Brace the Wave is “an acoustic electric album, recorded with digital analogue and digitally analogue equipment”, which, though it’s true that the mixes come from cassettes and real tapes as well as purely digital recordings, is in fact a joke. aiming at making fun of the digital versus analogue debate some seem to take so seriously. “People talk a lot about the integrity of all these methods of recording, but I am not that concerned and I use a combination of all those things”, Barlow explains. “For me if something is good, it is not going to make much of a difference if it is recorded analogue or digital. Especially now that digital technology is constantly getting better and better, all that debate is sort of nonsensical.”

Apart from a couple of tracks (“ C + E” and “Lazy”), which have been around for a while, most of the songs are completely new and were written during the recording process. I tell Barlow that my personal highlight is probably “ Pulse”, a melancholic ballad which mentions ageing and the connection between body and soul, and I find out that in fact the song is about FVT, a heart condition he was diagnosed with a few years ago. “If I am under stress, I have eaten salty food or I am hungover, my heart starts beating randomly and very fast. It is not a life threatening condition, but when it first happened to me and I ended up in a hospital, it was very shocking.” Since then, he has been very conscious of his pulse and can feel it racing when talking about certain things or feeling certain emotions. “You are taught since an early age that body and mind are connected, but learning that and truly understanding it take much longer. To me it only became more obvious when I found out I had that condition”, he continues. “It’s interesting because since then I have been meeting people that also have it, like for instance Thurston Moore, so it is not so unusual.”

On Brace the Wave and elsewhere, Barlow openly (and beautifully) sings about getting through difficult times in a very confessional, visceral, yet endearing way. “ I find it hard to sing about things that I have never experienced. If I could do that and be more of a fictional writer, it would be wonderful, but I am not and I write genuinely from my own experience.” His confessional writing is catharsis and celebration, and it doesn’t come from depression at all. “A lot of times I don’t write about things till they have already happened, so I tend to write more from the point of view of having been through something rather than crazy anxiety or depression. I am not depressed when I write music, as music to me is very enjoyable, so even if I am writing about something that would seem depressing, I am not experiencing it quite that way.”

Between Sebadoh, Dinosaur Jr, Folk Implosion and his solo work, Barlow has been making music for a very long time, and almost constantly non-stop. It was just in the early 2000s, when Sebadoh went on hiatus and Folk Implosion (in their first incarnation) broke up, that he seemed to be willing to take a proper break. “I didn’t want to call it quits, but the message I thought I was getting from the world was that I should probably stop or maybe just look for another job.” He explains that he wasn’t seeing a lot of opportunities in the way that people were approaching his new music at the time and it just seemed a very hostile environment. “ I thought I might have to figure something else to keep myself going, but it just happened that I didn’t. I have had moments like that, but I’ve just kept playing and opportunities have kept presenting themselves, and I keep following the leads and I am still going. When the leads stop and there is nothing else for me to do, then I guess I will stop doing it.”

Always self-conscious and self-critical, when writing, he feels the most pressure coming from himself. “I am very open to new music and a lot of times I think what I am listening to is so much better than what I do! There are always people doing things that are constantly blowing me away, there is so many high quality, beautifully rendered stuff that it is discouraging, almost intimidating. The older I get the less concerned about credits I am. I am more interested in what other people do and I am wondering if I am adding anything to music.”

Reflecting on his thirty-year career, Barlow thinks that Sebadoh III and Dinosaur Jr’s You’re Living All Over Me are probably the best records he has ever worked on. “ I don’t know if I will ever be able to surpass those. To me especially Sebadoh III is particularly on the moment, there are certain atmospheres, a certain truth on it, and I am not sure if I will ever be able to do something like that again." But at the same time he feels that the best has somehow yet to come, and, talking about individual songs, there is a real possibility he could write something better, especially in this part of his life where he feels so inspired. “Music itself is still very exciting to me and I feel there are still many possibilities. And hopefully yeah, I will do better things.”

His new marriage, and his now ten-year old daughter and five-year-old son are definitely playing a key role in this new-found clarity and inspiration. I ask him if he ever tries to push his kids to play any music, but he doesn’t want to, especially now that they have got through a lot of changes, moving from Los Angeles to a smaller community. “I just make instruments available to them, but I don’t want to force them to do it. I was pushed to play at a very early age and I hated it, as I wasn’t really a great player at the beginning and I didn’t really embrace it till much later. So it is difficult, because in a way I do want to push them, and in another way I really don’t want to at all.”

He has a very strong relationship with his kids, but though music obviously plays a huge part of his daily life with them, hearing him sing can stir up weird reactions in them. “Every time I put my music on they start yelling at me! I think the way I sing acoustic songs almost frightens them.” He uses the analogy of getting used to his father growing a beard as a kid, and then being in shock at seeing his father’s skin so pale and soft after shaving it off. “In a way it is the same thing for my kids when they hear me singing, as they just hear the ultimate version of my speaking voice. When they seem me behind the guitar singing in this strange strain of my speaking voice must be strange to them, and it might get them a while for them to appreciate it. I wrote a song for my parents recently, then sang it for them with my son actually playing harmonica on it and my daughter singing it with me so I think they are coming around a little bit, but we will see.”

Barlow is about to embark on an acoustic solo tour, the first without a backing band since his debut solo album Emoh. It is basically just going to be him on guitar and some embellishments like a synthesizer and a looped pedal. “I haven’t done a real solo tour in a while and I think I will probably see it in a whole different way than before”, he comments. “It’s so much more intimate than with Sebadoh and Dinosaur Jr, who are very loud bands! I am much more vulnerable when I play solo, and so is probably the audience as I can hear and see them.”

"Brace the Wave" is out now via Joyful Noise (US) and Domino Records (UK).

Lou Barlow is playing at Hoxton Bar And Grill on the 5th of October.