Fusing the electronic sonorities of New Wave with the aesthetic of New Romanticism, Beautiful Mechanica (a.k.a. Graham Sampson on vocals/programming/keys/guitar, Van Naarden on guitar and Porcelain on keys/vocals) have created a unique sound, which is exquisitely dandy and dark, as contemporary as revivalist.

So far they have only released the single "Always the Same", but their debut album is in the making, and they have already been gathering praise from critics and gaining many fans.

I caught up with frontman Graham Sampson and guitarist Van Naarden to discuss their influences, the Hotel Chelsea, Rockabilly and fashion.

How would you define your music?
GRAHAM: Reassuringly old, refreshingly new. Dark and romantic, electronically tinged. I’ve termed the expression electromantic. I think that covers it suitably well!

What is the idea behind the name “beautiful mechanica”?
VAN: The name embodies our sound: computerised (mechanical) beats and bass overlain with analogue beauty, voices, guitars, pianos.

You recently released your debut single “Always the Same”. How do you think it has been received?
GRAHAM: We’ve had nothing less than praise and kind words from those who’ve encountered it. The joy of being a modern, DIY musician is that once released, one’s work has an infinite life. In the past, where one’s validity as a musical artist relied on patronage of record companies, a release’s vitality was based on chart positions and remaining un-deleted. Now, we can be more long term and as each new person encounters us via our live work or social media influenced investigation, each release is a new thing, it’s re-born every time a new light is shone upon it.

You have lots of other nice songs ready… are you planning to release a debut album anytime soon?
GRAHAM: Yes, we are. All of the songs for the album, This Hotel Has Ghosts, have been recorded. Half have been finished and are ready for mastering. The remaining songs just require overdubs and final pre-master mixing. The plan is for the album to be finalised, printed and ready to ship for the beginning of 2016.

What inspires you most: people, places or things?
GRAHAM : All of those things. People, places, atmospheres, feelings, memories.
VAN: I believe all are important. A thought provoking work of art; a good deed; a feat of engineering... there is inspiration in everything and everyone. You just need to be open and breathe it in.

I know the New York’s Hotel Chelsea has been one of the biggest sources of inspiration for you. What makes that place so special?
GRAHAM: It’s like a giant tableau of life in all of its beauty, darkness, art and extremities. For every worthless punk that air guitared a Sid Vicious pose, there is a painter, poet, musician who created their masterworks within its walls. It’s incredible to think what scattered across its floors and over the decades so many legends have lived and created timeless works there. 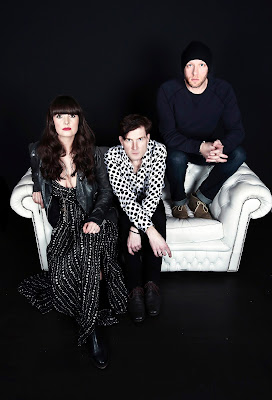 What was the record that made you decide you wanted to make music?
GRAHAM : My switch was tripped by Are Friends Electric by Tubeway Army. The six months of
June –December 1979 was when music, through Tubeway Army (a.k.a. Gary Numan), became my everything. Music and musicians create tribes and Numan identified me as someone who favoured the alternative, the dark, the beautiful, the haunting. From there I discovered Japan, John Foxx, Cocteau Twins and points in between.
VAN: I can pin point exactly as it was the day John Lennon was murdered in December 1980. The radio, the television and all other media were awash with John Lennon and The Beatles music, which hadn’t been on my radar. I remember walking home from school on a wet dark winter’s afternoon and feeling sad. Looking back that was odd, as I didn’t really understand whom John Lennon was at the time, but felt he was important and was affected by the nation's emotion. Consequently, when home I remember getting out my mum’s Beatles records and placing them on the kitchen table. I put on Beatles For Sale, as I liked the autumnal styling of the cover, and here started a love affair with The Beatles and music. The more I played the records, the more I knew I wanted to be in a band, and an interest in playing guitar ensued not long after.

Graham, you have been in a successful Smiths tribute band for a very long time. How does it feel to finally write your own music?
GRAHAM: It’s been a return to writing and performing my own music. The two eras of my original music have been punctuated by my transition to being a tribute artist. That role is confined to the stage, and I view it more as a theatrical role, as I am having to embody the presence of someone else. Assuming the image of Morrissey on stage was easier for me than perhaps those others who are younger, as I was a teenager when The Smiths existed. My sensibilities were formed by my interest in Numan and Sylvian in particular, but Morrissey built on those, and so the adult me is shaped by sensitivities formed in those years. With a decade of “being Morrissey” done, I needed to reclaim myself. I literally did need to sing in my own voice, write my own words. Being Morrissey is nice, being me is better. And transitioning from original to tribute to original is a journey less often taken, especially when one has been in such a globally known tribute act.

Van, you also play in a couple of rockabilly bands. Can you please talk about them?
VAN: Rockabilly is pure and honest music. This was the music genre that grew out of Country in the US in the '50s, and it was the birth of Rock 'n' Roll - Elvis, Eddie Cochran, Gene Vincent, Johnny Burnette and so on, great artists who all had great bands. Without guitarists like Scottie Moore, Cliff Gallup, Carl Perkins and their influence, there would be no George Harrison, Jimmy Page, Jeff Beck etc. The Stray Cats and The Polecats kept the revival going in the '80s, and in more recent times acts like Imelda May have been successful in crossing over to the mainstream.
As for the bands I play in, Carlos & The Bandidos are a very well known band on the Rockabilly global circuit for some twenty-five years. They grew up on the scene with Imelda May and Boz Boorer. The band’s Mexican/West Coast rockabilly style is unique, and we simply don’t sound like any other band. For me, the best part is that I get to play with fantastic musicians. There will be a new album coming out next year.
I also play with The Savage Hornets, which is more a bluesy/rockabilly affair. We were lucky enough to record the debut album at Imelda May and Darryl Higham’s studio, which they subsequently released on their record label. Again, all brilliant musicians such as Rob Tyler, who has played drums with so many acts, but is probably best know for playing with Restless.
I also love the rockabilly styling. From the stage the crowds look amazing: girls in their '40-50s dresses with bright hair and make up complimenting their colourful body art, and guys in their '50s shirts and Levi’s with the obligatory turn-ups and chains. Rockabilly fans are passionate and take the music and styling very seriously. I love it!

Beautiful Mechanica played their debut gig at Islington Academy in July. What other upcoming gigs do you guys have?
GRAHAM: There’s plenty in the pipeline, with many as supports to well known bands. By presenting ourselves to their audiences we hope that we can become the favourite new band of those who loved '80s and contemporary electronic, romantic music.

What is your worst fashion secret?
GRAHAM: For several years I worked in the Fashion Industry – that’s my secret, now revealed. I feel dirty just saying that. If you mean clothes I should never have worn, oh they never stop..the last is constantly superceded by the next. I’m sure some will say my Velvet Jacket worn at our debut show was ill-advised. The pains of the Dandy…
VAN: I don’t really like any of my clothes in general, but I think the '90s were pretty rubbish. Everything baggy. I look back at photos and cringe.

If you could have a super power, what would it be?
GRAHAM: To be invisible.
VAN: X-Ray vision