IN CONVERSATION WITH THE DANDY WARHOLS

Who hasn’t embarrassed themselves singing along “Bohemian Like You” in a Karaoke bar at least once in their life? This 2000’s wry, poignant statement against the bougie hipster culture which still resonates today, is unarguably the biggest hit of Oregon alt-rockstars The Dandy Warhols and the one that back in the day gained them mainstream popularity, thanks to the inclusion in major television advertising.

After that the band released another best-selling record, Welcome to the Monkey House, and then somehow got forgotten by most casual listeners and started getting mixed reviews in spite of methodically continuing to write and release pretty decent music.

Over a decade and four studio albums later, the Portland quartet are back with a new label, new management and a new full length. At just a little over thirty three minutes long, with each song averaging about three and a half, Distortland is the shortest Dandys album as yet, still it is filled with concise, catchy gems and probably says more than any other record the band have released since 2000’s Thirteen Tales From Urban Bohemia. This is probably because after so many years, they are completely free to stay 100% true to the sound they want.

I caught up with singer-songwriter Courtney Taylor-Taylor before the Dandys sold out show at London’s Electric Ballroom and we chatted about the making of the new album, David Bowie, Joe Dallessandro and the art of avoiding music clichés.

Is it true that Distortland was mainly recorded in your basement on an ‘80s cassette recorder and then finished in your studio?

That is not true. Like with all our other records, the basement is where it started, because that is where you have all the time in the world to play around with things, but then you take them to the studio. We have this incredible studio, absolute state-of-the-art, with vintage gears from the 1950s state-of-the-art, and that is why it sounds like a real record. Pete [Holmström, the Dandys guitarist and co-founding member] has a pretty sweet studio at his house too, so he would also take it over there and if he wants to do some extensively noodling, then we would all pay an engineer to be there, as at this point, our studio has outgrown our abilities. But to do very experimental stuff you want to do that in your basement, where you can just sit and twick forever, and then months later you listen to it and have an objective opinion of what you have done. As when you are making something, you really don’t know what you are making till you can get away from it and have objectivity, which makes all the differences between being good or not good. That is why most of the greatest artists smoke tons of marijuana, because it is an unlearning device through which you can clear your mind, and then see and hear what you might see and hear as for the first time. That is another reason why the basement is so important and that is probably why so much music is now called bedroom music. It is just people with their laptop in their bedroom making this stuff and then they go to a real studio.

What is the most precious piece of equipment you have in your studio?

We have been collecting equipment for twenty years so it goes through phases. It is usually anything that makes a sound nobody else is currently using, and for us that changes.

And what was it for this particular record?

I am not going to say it, as it is a secret weapon for sure. As soon as everybody else finds out about this piece of equipment then I will tell you.

Jim Lowe mixed the album. What influence do you think he had on it?

I think the mixing is the most important part, it’s the sonic imprint at the end of the whole thing. You have to take in consideration what your strengths and weaknesses are, and for this record Jim Lowe fit perfectly into our weaknesses and strengths. It was all about leanness and organization. Also the vocal tone…. the vocals sound fucking amazing, the best we have probably ever had. That was bizarre luck as this guy just popped up and said ‘hey”. I think bands should produce themselves, because the less outside influence you have the better, but when it comes to the mixing you want someone that is very different from you as they can reinforce your weaknesses as well as your strengths.

This is your shortest record as yet. Were you trying to make a statement or did it just happen?

I think it just happened. We felt that what we had was the whole statement and we should probably not try to finish other things we had just started. The most recent things we have been working on don’t actually seem to be that way, so our next record will be very different. Usually there are always three or four years in between records, but if we could get another album out like next fall it would be incredible… the two closest records we have ever released! Having put this album out for one year and have another one out would be like a real professional band!

Oh c’mon, you are a real band!

We are more flakey artists, good enough to be considered a real band, but I am not sure about being a professional band… if you look at bands like the Rolling Stones, The Beatles, Led Zeppelin, back in the day everybody was releasing a record every year.

What were you guys actually up to during the four years preceding the release of Distortland?

I don’t know, just living our lives I guess. We have always had a pretty casual approach to the business part of being the Dandy Warhols. We just live our lives and music is a part of it.

And how long did it take you to make it? 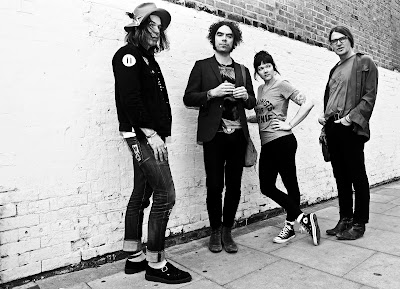 We never really decide to make a record, since we own a studio we are always working and if there is enough material then we say “oh this could be an album, lets finish all of this” and that would be a new record.

Do you usually end up with extra material you can used for the next album or as B-sides?

Never, not at all, not one thing. It’s funny as they always ask us about B-sides, but we never have any. We usually always end up with a huge amount of cover songs, because we always have to cover other people’s songs to use as B-sides. I am not a prolific writer. I actually never write songs, I have never written a song in my life, I just have to wait for them to come to me. I never know how it happens, it just happens when I hold my guitar.

I really love the video for “You are killing me” and it is good to see Joe Dallesandro back. How did the idea of getting him involved come about?

I was at this dinner with many artists like Teddy Antolin, who was David Bowie make-up artist and a good friend of ours too, and Dallessandro was also there. Though I had met most of the people of the Warhol era before they died, I had never met him before so I was just curious about what he did before and after the Warhol Factory, and he told me all his life story, which was kind of strange. As we had to have a video coming up it just seemed to me that getting him involved would be a great idea, as he is kind of the last of the superstars. I think that Holly Woodlawn actually died the day after that dinner. So over the next few days my brain made this little metaphor for him being an alcoholic, moving back to Washington state with his mother where they were alcoholic together for a decade, and then somehow getting dragged back to New York city into this freaky deaky scene of which his wife was part of, but she also stabilized him keeping it all together. And I wanted furries in the video, which would represent New York, all the weirdos and the perverts in the Big Apple. When I talked to Dallesandro about it he really enjoyed the idea, so I talked to Mark Helfrich, the director, with whom we had worked before, and because he is such a great filmmaker I then just let him shoot the video and never got much involved till the editing. It took forever, it was like a two-month project, but it is perfect and Dallesandro looks so cool in it. It is funny as there is this shot of him, arm-crossed, long hair, shirt off, which was made even more famous by Anthony Kiedis, as he redid the same shot. And also, the most famous photo of Anton Newcombe is with a gun on the cover of Strung out in Heaven, which is also reminiscent of a Dalessandro photo. The video was actually shot in Dallessandro apartment, and as we got those original photos in I am waiting for people to ask me why there are pictures of Antony Kiedis and Anton Newcombe in that video, but nobody has asked me that yet, maybe because either everybody understands or they are just people that are not into that kind of thing.

Do you think you have been affected by all the changes that have happened to the music industry over the last few years?

The only thing that affects our music is that we need to avoid current idiosyncrasies and trends, that is the most important thing in making music that has an emotional impact. You need to avoid clichés. For instance in 2005, if you were playing guitar like the Strokes you were three years too late, as they had been ripped off so much that they became emotionally transparent or not existent. And in 2002, if you were singing like Eddie Vedder you were simply a joke. Or you can’t have a whistling hook, as that is also such a tiring cliché. And that is the only thing that affects the music we make, just avoiding any over-the-top trend. But beside that, I actually like where the music industry is at, because anyone can have access to anything, so if you just make unusually cool, emotionally engaging and powerful music, avoiding clichés, you will get found by people who you want to find it. And that is great as it wasn’t like that in the ‘90s, when you could only get found by a label putting tons of money into promoting your music and hoping that it catches on. Now you still can only become a success with a big label, but even if that fails, if you truly make great music over the next years you will be found.

David Bowie was a fan of your music and invited you to support him during the Reality tour. What is your fondest memory of him?

We had just made Welcome to the Monkey House and it was the era of the Strokes, The White Stripes, The Jets and The Vines. Vintage guitars were huge, but we made a record with very little guitar and lots of synthesizers instead. And he once told me “Courtney, why do you always have to be the first at doing everything? It is so much more profitable to be the second.” 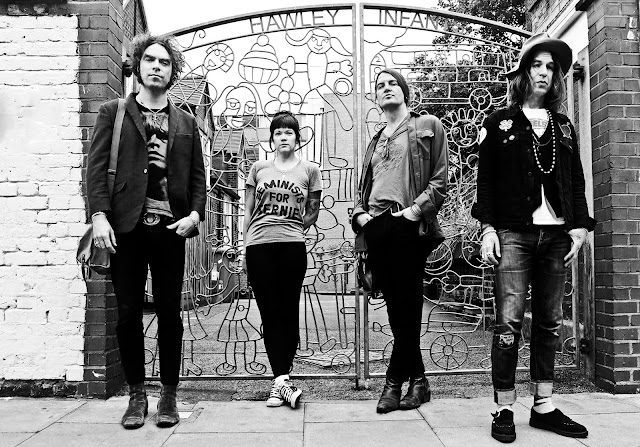 Distortland is out now via Dine Alone Records

Originally published on London in Stereo
____

Posted by Eleonora C. Collini at 9:25 am

Email ThisBlogThis!Share to TwitterShare to FacebookShare to Pinterest
Tags Interviews, The Dandy Warhols