IN CONVERSATION with TOMMY STINSON

Tommy Stinson discusses resurrecting Bash & Pop, the making of their new record Anything Could Happen, Johnny Thunders, and the comparison between The Replacements, Guns N Roses and Soul Asylum.


Every time someone mentions Tommy Stinson, I can’t help but immediately think of The Replacements, one of the most iconic bands of the ‘80s alternative rock, and definitely one of my all-time favourites. But there is so much more in the curriculum vitae of this talented American musician, who after the break-up of The "Mats" in 1991, went on forming Bash & Pop for just one record (Friday Night Is Killing Me) and subsequently Perfect, then among other things, played bass in  Guns N Roses for almost two decades and Soul Asylum for seven years, as well as releasing two fantastic solo albums in between.

Following the 2013-2015’s Replacements reunion tours, when Stinson realised that he and the band’s frontman Paul Westerberg weren’t going to make another record together as they (and we) were hoping, he decided to revive the short-lived (but well-loved) Bash & Pop, and put out the brilliant Anything could Happen. While the line-up has completely changed from the original, the new album is just about as good, and every bit as much rock n roll fun, as their minor classic from the '90s.


Stinson and I caught up before the band's London show at the Garage and we discussed the making of the record, the new line-up, Johnny Thunders, and the comparison between The Replacements, Guns N Roses and Soul Asylum.


What made you decide to resurrect Bash & Pop more than twenty years later?
I was going to make another solo album and I had initially recorded some songs with Cat Popper [Grace Potter and the Nocturnals, Jack White] on bass, Frank Ferrer [Guns N’ Roses] on drums and Luther Dickinson [The Black Crowes, North Mississippi Allstars] on guitar, but then I realised that it was becoming a band record more than a solo record. And when I played some of the songs to some friends, they all thought that it sounded similar to the first Bash & Pop album, so I decided to call it that.

But now Cat, Frank and Luther are not in the band anymore and you recruited new members, right?
Yeah, the current line-up is Justin Perkins on bass, Joe Kid [Sirois] on drums and Steve Selvidge [The Hold Steady] on guitar. They actually all helped make two thirds of the record.

So, was the writing process a collective effort or were you still the main songwriter?
I wrote the core of the songs and that freed me up from having to work with many apps. When you make a solo record you are playing different instruments, producing, doing everything by yourself and it gets a bit tedious, so my idea to get a band was to free me and be able to just play guitar, sing and write.

Was the album recorded live, like the way it used to be in the ‘80s?
Yes, as much as we could do live without losing the fidelity. You miss a little bit of that in doing it that way, but in the home studio that I have in Hudson, NY it seemed like the best way to do it.

And you recorded it entirely in your studio?
Yes, with the full band. Everyone crammed in a 15 x 80 square feet room.

You launched a PledgeMusic campaign to fund the album, so I am assuming the deal with Fat Possum Records came about later?
No, it came about before actually. I had essentially invested my own money in making the record when I started it, paying the musicians out of my pocket, so the Pledge campaign was mainly to help offset the costs that I put, but also to promote it, as Pledge is good for that too.

To commemorate the resurrection of Bash & Pop, your old label Sire/Reprise also released your first record Friday Night Is Killing Me on vinyl for the first time ever. How does it feel to go back to those songs so many years later?
It is actually not that strange as since I made that record, I have done lots of those songs live when I was touring solo, but it is good to go back and it is good that people like the songs on that album.

Most of the new songs are very upbeat musically, but the lyrics are more about feeling down and getting fucked up. How does that contrast between music and lyrics work for you?
I try to take uncomfortable situations and have fun with them, and that is what this record does. There is a lot of fun in the sadness of these songs. But that is how I have always written, from different perspectives, I am not first, or second or third person, I am a bunch of people, and I put them together like a composite kind of thing.

Is it true that some of the material that ended up on Anything Could Happen was originally written to be included on a possible new Replacements album that never came into fruition?
We tried to record a couple of times, but we just couldn’t figure it out, we couldn’t get it right. I had only recorded a couple of tracks of this album with Paul [Westerberg] in them, but when it became apparent that we weren’t going to make a record, I started cutting tracks. But yeah, I began working on Anything Could Happen while I was still touring with The Replacements.

Are you and Paul still in touch?
We send each other texts once in a while, and we speak on the phone, but it has always been like that. We call each other when we need a goofy chat about something stupid.

What is your fondest memory of playing in Guns N Roses?
It probably doesn’t have anything to do with the gigs as much as it does with what happened around it. The first time I went to Greece with them it was pretty awesome. I only had one hour of time to see the things I wanted to see like the Acropolis, so I just went on a taxi and got to see them all.

You have been in three huge bands, Guns and Roses, The Replacements and Soul Asylum. How would you compare the dynamic between band members in all three of them. To me they have always seemed bands centered around a frontman with a very strong personality.
To be honest with you all three singers were geniuses in a different way and they also had the same troubles as one another. They are very comparable in many ways, both good and bad. It’s hard for me to compare them without calling them out and I don’t want to do that.

I wouldn’t want you to do that either…. I was more talking about your role in those bands, the dynamic between band members and somehow how it felt for you not be the frontman.
It made me not want to be a frontman in a band! Seriously, to do that you need to be a role player. It helps everyone if you do the job that you are supposed to do as a musician, which is playing music, and everybody has to keep their heads down to do that. I have been good to be the team captain in a way in my past life, and I think that is probably the best thing I can do.

You are going to be very busy this summer, as you are also starting your tour with Cowboys in the Campfire soon.
Yes, I am going home, then I am starting with Cowboys in the Campfire, then I am going out with the Psychedelic Furs in September and October. I am going to be busy as long as I can be busy. I had a bump in the road and because of some personal things going on with my ex-wife, I had to take myself off work to take care of my kid for a while. But now mum is back in action and taking care of the kid, so I am going to work a lot to catch up.

You moved from Los Angeles to New York in 2011. Where do you think you fit in more?
I like where I live. Manhattan I can’t take, there are way too many people, and L.A. is a little too spread-out. I have the best friends in the world in L.A. from living there for twenty years, but I think I now found my home in Hudson, NY.

Last year you played that Johnny Thunders' L.A.M.F. show. What influence do you think he  has had on your music?
Paul [Westenberg] was a huge Johnny Thunders and the New York Dolls fan, so I became one as I was learning about them. And I think there is a part of Johnny in all of us and I don’t mean that figuratively. Most of the punk rockers and the musicians I know have been his fan at some point or another. There is a sort of intrinsic beauty to Johnny that everyone takes away, as fucked up as the guy was.

What is the weirdest thing you have in your house?
A fortuneteller machine. You put a corner in it, push a button, and it tells you your future and it is different every time. Based on your algorithm of the day [laughs]

Where did you get it from?
I got it from a place called Out of the Closet, which is a nonprofit secondhand store selling items whose proceeds are used to buy Aids patients food and things like that.

What is the most embarrassing record you have ever bought?
I don’t have many guilty pleasures that I bought…. Actually maybe Dexys Midnight Runners! 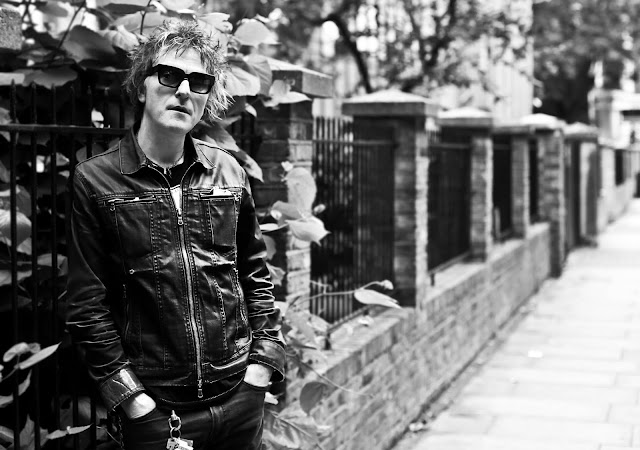 "Anything Could Happen" is out now on Fat Possum Records

Posted by Eleonora C. Collini at 8:01 am