IN CONVERSATION with ZOLA JESUS

Known for her futuristic look and for combining noise-punk with alternative pop, often adding electronical, classical, industrial and goth to the mix, Zola Jesus has been one of the most creative and experimental musicians of the last decade.

After the more polished textures and the almost poppy melodies of 2014’s Taiga, for her 6th album Okovi, the American singer-songwriter goes back to the fierce immediacy and the gothic atmospheres of her early work. Written in her native Wisconsin forests, where she recently moved back to, the album is a beautiful, and profound meditation on loss and reconciliation, following a number of personal tragedies in Zola’s life over the years.

I caught up with her to discuss the making of the new album, going back to her first label Sacred Bones, David Lynch and returning to the woods.

Stylistically, Okovi is quite a departure from your previous record Taiga as it represents a return to your early work, but at the same time it is also a step forward. Was that a conscious decision?
I didn’t really think about that, I just intuitively felt that I needed to make a record that was cathartic, more atmospheric and had different shapes of the difficult journey I had been doing for the last couple of years.

What was the biggest difference in terms of writing and recording with Taiga and your other previous albums?
This time, I really tried not to second-guess myself like I had done for my past couple of records, just letting the songs fall out and not trying to change them too much. With Taiga, I just wanted more to do the things the right way, I wanted it to feel like an established process, but with Okovi, it was much more intuitive and much more based on feelings than on the brain. This time, I just tried to turn the brain off.

You used the guitar for the first time on this record. Are there any other particular instruments featuring on the record that you hadn’t used before?
No, the biggest difference is the guitar, which appears throughout the whole record, and then string quartets, but I had used those before.

Did your long-time collaborator Alex DeGroot produce this album too?
We co-produced it. I produced the bulk of the record, as I produced and wrote at the same time, and then at the end I brought Alex in to tidy it up and make it feel cohesive. He is very technical and just brings a different side to the music.

The new record also features contributions from WIFE, cellist Shannon Kennedy and percussionist Ted Byrnes. Will any of them be touring with you as well?
No, they just helped me for the record. For this tour, Alex [DeGroot] will be playing guitar, and Louise Woodward viola.

Lyrically, Okovi is a dark album that explores the themes of death and the loss of your loved ones. Did that come from a personal experience?
Yes, it did. The songs were written during a very difficult period for myself and those around me, and I was selfishly using the songs for myself, to work through things. I also used some of the songs to communicate with the people I care about, as I felt that was the only way to reach them. For that reason, a lot of the songs on the record feel very fragile. 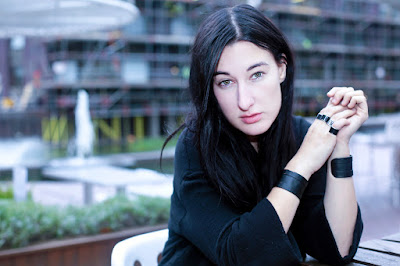 The new video for “Exhumed” reflects those dark thoughts too. How involved did you get in the making?
I always get very involved. It was just me and the director Jacqueline Castel together. We established the concept together, then she came out to my land in Wisconsin and we just ran around and shot it.

“Okovi” is a Slavic word for “shakles”. In general, do you think you are chained more to material things or impalpable things like death and love?
If anything, I think I am more chained to emotional things and my mind, rather than material things. It is more inner things that I sometimes feel I am imprisoned by.

What prompted you to go back to your original label Sacred Bones?
Just before this record came out I missed working with them, so I felt it was the right thing to do. Mute Records [who released Taiga] was fantastic, but for this record I just wanted to work with people I knew very well.

On the 8th September, Sacred Bones will also release a Stridulum LP, which collects the previously released Stridulum and Valusia EPs (both from 2010) together as one volume. What made you decide to re-release them at the same time as the new album?
I think it just worked that way. We wanted to re-release Stridulum because it has been quite a few years now and it is still an important record to a lot of people.

You've talked about your musical and literary influences many times before, but when was the last time that visual art had a strong impact on your work?
When I was making this record I was very inspired by the work of the visual artist Jesse Draxler, and I would print out his images and place them on my wall in the studio. So when I came to the album art, I contacted him and asked him to do it. So that is a full circle.

You have collaborated with David Lynch and John Carpenter in the past. What influence have they had on your music?
think their vision is individually very singular and very environmental, because when you watch their movies you feel immersed in them and that is very inspiring to me. I like the idea of allowing people to dip into something they normally wouldn't.

Have you watched the new Twin Peaks series by the way?
Yes, and it is very good.

How does your strong visual presentation and your somehow futuristic style relate to your music?
It is all part of the same impulse. The music that I make is coming from an idea, a world that I want to explore, and also the clothes that I wear, the way I move, the house I live in, everything is part of that. I am very sensitive to environments, so I like having control on them as much as possible

You recently moved back to the North Wisconsin woods where you are originally from. Where do you see yourself in 10 years, still living there or back in a city?
I will be there forever. I see myself isolating more and more probably.

Last year you headlined the Melbourne Music Week singing along a string quartet, as you had previously done at the Guggenheim. Is it something you think you are going to explore any further in the future?
Yes, I love strings, I love classical instruments and I am really inspired by the idea of maybe one day writing up something. I just like to explore the classical world and take the bits that I like from it and leave the rest, but it feels like my world as well, just a different part of it.

I think this was the longest gap you had had in between records. What were you up to over the past 3 years, apart from working on Okovi?
I was pretty depressed at the beginning, so I wasn’t writing very much. I was watching movies, reading books, then I moved back to Wisconsin, started building my house, but mostly I was just trying to give myself time to live, because you write an album, then you tour and you forget you are a human being, you become a gipsy in a way, so it has been important to me to give myself more time to live outside of the music.

Okovi is out on 8th September via Sacred Bones

Posted by Eleonora C. Collini at 7:04 am