IN CONVERSATION with BLACK LIPS 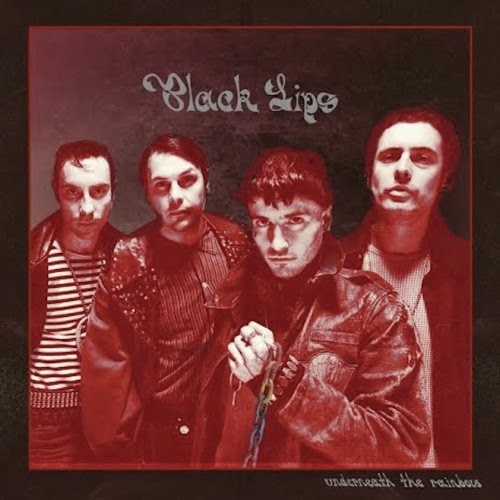 Known for their hodgepodge of blues, rock, doo-wop, country, and punk, as well as for their boisterous antics, Black Lips have been making brilliant music since 1999, starting a new rock ‘n’ roll trend in their hometown Atlanta, GA.

Three years after Mark Ronson’s produced Arabia Mountain, their seventh album Underneath the Rainbow is out today via long-time label Vice Records.

I chat with bassist, vocalist and co-founder Jared Swilley from his home in Atlanta a few days before the band embark on an extensive promotional tour. What makes Jared super funny is the fact that he actually makes jokes in a serious fashion. For him and his bandmates Cole Alexander, Joe Bradley and Ian Saint Pé entertaining seems to be an earnest business.

Underneath the Rainbow was produced between Dunham Studio in Brooklyn with Thomas Brenneck and Blackbird Studios in Nashville with the Black Keys' Patrick Carney. Of Carney Jared says: “We were friends before working together which made everything easier. We also have similar taste in music and similar career trajectory, minus all the Grammys, Platinum albums and Golden records The Black Keys have.”

They were originally going to call the new album The Dark side of the rainbow but they then changed it to Underneath the Rainbow after finding out that ‘Dark side of the rainbow’ is what people call it when you play Pink Floyd’s Dark Side of the Moon along with The Wizard of Oz. “I think that’s so stupid so we didn’t want that association”, Jared points out.

The new record showcases the ever successful Black Lips’ cocktail of classic rock 'n' roll tones, blues riffs, and more slow-paced country jangles, but there is one song in particular, ”Funny” that somehow stands out for its let-me-dance-like-crazy catchiness and heavy use of synthesiser. “It was our take on glam rock, like Gary Glitter or something like that”, Jared reveals. “We have messed with all music genres in the past, we have even dabbled in hip-hop before. This time we just wanted to have a club song, like when you are in Ibiza in summer and all the kids would be dancing to it in the discotheque.”

Lead single “Boys in the Woods”, a sublime combo of lazy bluesy groove and psychedelic guitars, is accompanied by an unhinged video co-directed by the ATL Twins and Matt Swinsky, featuring drug abuse and blood-filled fight scenes in a backwoods hell. “We shot it in Atlanta in what I think used to be a big hospital out in the woods”, Jared explains. “Our friend there makes props for horror movies and it’s like a haunted house during the autumn. We were just trying to recreate a sleazy kind of country trailer park, a meth-amphetamine field rapacity. And I think the ATL twins were perfect for capturing that vision.”

I ask Jared if he enjoys writing, recording or performing live most and he says that he really likes recording as that’s when you get to create things which you can then be gratified for later. “ But I think playing live is the best”, he continues, “because it’s instant gratification and I really love being on stage, I feel at home there. Deep down we are entertainers, and I like entertaining and being on stage more than anything else”. And there is no doubt that’s definitely something Black Lips can do like no others. They really know how to put on a crazy show, make it bizarre, provocative, shocking. “I did a lot of mad things on stage”, Jared admits. ”I’ve even broken a guitar over someone’s head one time because they were trying to mess with us. I think that was pretty insane!”

The last extravagant thing they came up with for the upcoming tour is “scented” shows during which a band-specific scent will be spread, evoking fragrances such as “cedar’, “moon”, “ocean”, “denim” and “fire”. That was actually an idea Jared had a few years ago. “I was dating this girl and his brother sold smells to different corporations. We were in New York and he had to go to a meeting to sell a synthetic smell of ham, and I thought that was really fascinating. Then I found out that a lot of US militaries, big department stores and casinos use certain smells to either get people to identify smells with a certain place or to make them calmer, happier or more eager to buy something. People are seeing us playing and they are hearing us playing, and I thought if we could put a scent to our band we’d have hit three senses all at once. So now we just need a Black Lips’ taste and I also want to hit the sixth sense but we have a long way to go talking to people that have extrasensory perception, mind readers and stuff like that.”

Out of all the created scents Jared is particularly fond of the “moon” aroma. It’s quite difficult to describe it with words but apparently it smells like kind of aerosol, a little bit chemically, though it isn’t really chemical. “The reason why I like it so much is because nobody has ever smelled the Moon”, he tells me. “You can’t go on the Moon without your big astronaut helmet on otherwise your face would just explode. So I don’t understand how can someone recreate a synthetic version of what the Moon smells like when nobody really knows what it smells like.”

Just so that fans can have a complete Black Lips olfactory experience, a scented version of Underneath the Rainbow will also be out on cassette through Burger Records, available at their shows. In case you wonder what it smells like, know that it’s something very musky, similar to cedar. “It’s supposed to be familiar and fatherly”, Jared reveals, “like your either dad or your grandpa’s smell when you hug them. Something people can feel calm and reassured when they smell it, so that they can say ‘Oh that’s Black Lips, protect me!’”

One of the most important things for the band is reaching out to people even the ones who live in areas traditionally less exposed to pop music. That’s why in late 2012 they toured the Middle East for two months, playing in Egypt, Lebanon, Jordan and Iraq among others. One of the fondest memories of the tour Jared has is when they were in Alexandria, Egypt. “We were playing this weird sushi restaurant and we didn’t think anyone was going to come, but then around one hundred kids turned up. They were all teenagers and there was also this skateboarding team. They were all so cool and so excited as they had never been to a show before. Then the next day we met them in the morning and all went for a big skateboard session, and that was really amazing because it reminded me of when I was doing that as a teenager but now I was in Egypt skateboarding with all these kids!”. The whole tour was filmed by Billy Cody and made into the documentary Kids Like You & Me, which was premiered at some special shows last autumn and is now available on iTunes.

In 2009 Cody also co-produced the Matthew Robison’s documentary We Fun: Atlanta, GA Inside Out in which the band have a featured role, being such a big part of their hometown’s music scene. I want to know how Jared thinks the Atlanta’s music scene has evolved over the last few years. “This has always been mainly a hip-hop town, also soul music and R&B. It has always been about rap music which is cool and I love a lot of hip-hop from here, but there wasn’t really a rock ‘n’ roll scene up till the 2000s, it just didn’t happen. It wasn’t until the time that Deerhunter and we began getting bigger that there were actually rock bands starting.”

Black Lips have also recently filmed scenes for a forthcoming Terrence Malick film, a project which has yet to be named and still remains top secret. “We did a lot of shooting for that with Ryan Gosling and Val Kilmer last year”, Jared says, “ but I don’t know anything about it cause it was all very secret. We didn’t get a copy of the script or anything. Terence is so super secretive about it, even the actors don’t know what’s going on. I don’t even know what the movie is about, though I am assuming music or something. We even signed paper saying we wouldn’t discuss it with anybody!”

Black Lips have always openly declared their music influences ranging from Los Saicos, to 13th floor elevators and Love, to Jaques Dutronc, Brian Jones and Bo Diddley. I am curious to know who Jared would choose between the 13th Floor Elevators and Love and he tells me he would probably go for the former. I also ask him if there is any band he used to be a huge fan of, but now he feels almost embarrassed to admit it and he does seem to be proud of the music taste he has had since he was a kid. “When I was young I really liked Rammstein and for a while I felt embarrassed”, he finally confesses, “but then I listened to their songs again and there are so many good ones so I really don’t care. Also Green Day, but even some of their older songs are still kind of catchy and good.”

After a quite extensive North American tour, Black Lips are playing in Europe in late spring. Their two dates at Bethnal Green Mens Working Club, London are now sold out. Hopefully you’ve got your ticket already!