IN CONVERSATION with THE NOTWIST


For The Notwist it’s all about experimenting new ways to make music. Brothers Markus and Michael Acher and friend Martin Messerschmidt started as a punk rock band in 1989 and later moved first to melodic post-hardcore and then to abstract electronics when Martin Gretschmann joined them in 1997.
Today the Bavarian band is best known for the innovative combination of electronica and indie rock showcased in their masterpiece Neon Golden and the almost equally good follow-up The Devil, You + Me (the first full-length without Messerschmidt), which respectively came out in 2002 and 2008.

After another six-year break, their eight album Close to the Glass was released at the end of February via Subpop in the States and City Slang in Europe. I chat with singer-guitarist Markus Acher before their sold out show at London’s Village Underground. Markus is friendly, soft-spoken, willing to share his sources of inspiration as well as his longing for creative experimentation.

Close to the Glass was recorded at the band’s own studio and rehearsal space in Weilheim in Bavaria, near Munich. “We usually compose songs in three different ways”, Markus explains. “There are songs written by just one of us and then arranged all together, songs that we write collectively either rehearsing or just playing around, and then there are songs that develop out of different loops or experimental stuff we create in the studio mainly from samples”.

In comparison with the previous two albums there was much more studio jamming and rehearsing
mainly due to the increased number of band members. The Acher brothers and Martin Gretschmann are still the core of The Notwist and do most of the work in the studio, but as a live band they are now six people. “We played and recorded a lot in the studio to catch the live energy and intensity that we have on stage”, Markus reveals. “I think that’s the main difference with the two previous albums. I also think than on those two full-lengths we tried to find just one sound mixed out of different elements that could go through the whole record whereas on Close to the Glass we went in different directions and the songs differ from one another.” 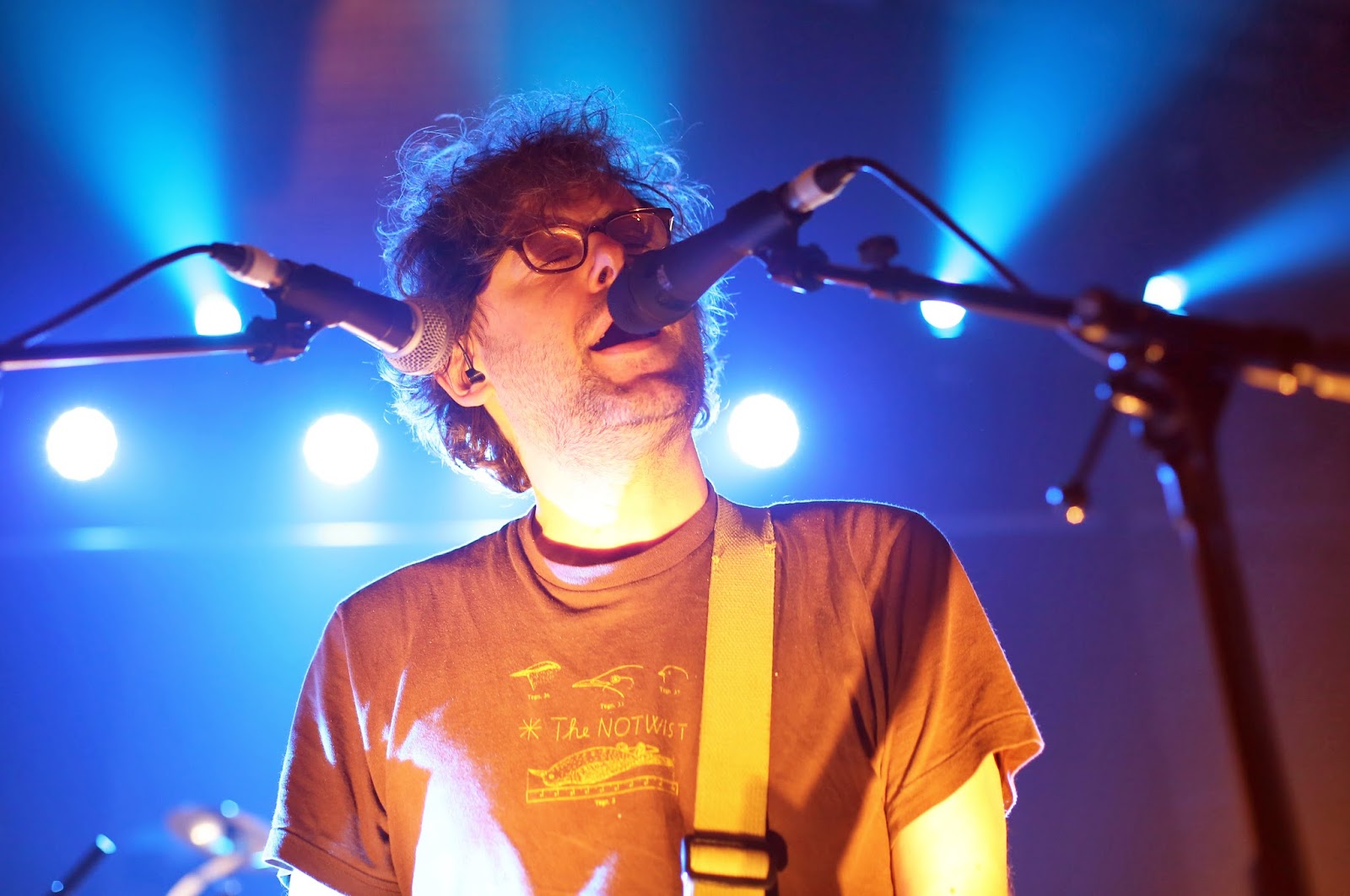 Markus sees the new album as a collage of different things, something the cover art, made by LA designer Brian Roettinger also reflects. “We told him that we wanted the cover to be a sort of collage of our influences”, Markus clarifies. At the same time he thinks that it’s important to see Close to the Glass as a whole. “The songs are very different but hopefully it makes sense to put them together as a sort of puzzle or mosaic.”

The lead single “Kong” and its video (directed by Japanese film-maker Yu Sato and featuring illustrations from Tim Divall) tell the story of a kid trapped home by a flood dreaming of being rescued by a superhero. That was based on a memory Markus has of when he was 12 and the streets around his house were flooded. ”The water of the nearby river had come out because of the excessive rain”, he recalls, “and we couldn’t drive anywhere, we couldn’t leave the house for a couple of days which I actually found very exciting and adventurous. Back then I was reading a lot of comics so for the song I imagined this kind of superhero that is a sort of mixture of Superman and King Kong, and that perfectly fitted how the song sounded and everything.”

Neon Golden was the band’s groundbreaking full-length and started a new indietronica trend that characterized the whole 2000 decade. As it’s constantly praised by critics more than anything else The Notwist have done so far, I want to know if when writing new music they have ever felt the pressure to make something equivalently good. “We actually discovered that Neon Golden was such an important record for critics only during the interviews for The Devil, You + Me", Markus admits. “We knew it was the most successful album and that it got very good reviews, but we were somehow surprised that in promo interviews lots of journalists seemed to praise it so much. So we weren’t really thinking of that when we were making The Devil, You + Me because we simply weren’t aware of that. As for this record we were feeling free again because we had already made the follow-up to Neon Golden, so no we didn’t feel much pressure.”


Close to the Glass may be the first Notwist album in six years but the band have been busy with many other things. Both Acher brothers have their own side projects, Markus plays in Lali Puna and Michael in Ms. John Soda, and together with bandmate Martin Gretschmann they are in 13 & God with indie hip-hop duo Themselves. In between the last two records The Notwist also scored two films by German director and screenwriter Hans-Christian Schmid, Storm and Home for the Weekend. I ask Markus if he thinks they are going to compose the soundtrack to other films in the future. “Yes we would definitely like to score more movies, especially international as German films have a certain peculiar style that we like but we’d also love to go for more adventurous, surrealistic, experimental movies so that we can make different songs, noisy stuff, collage and anything that could fit into a film.”

The band also recently made a radio play with music based on samples from records they have in their studio, scored some theatre plays staged in Munich, and at the moment Markus and Michael are just finishing the music for a play in Berlin which opens on the 28th March. “We love writing for theatre”, Markus confesses. “ In a way you are limited but you can also concentrate on something different because you always have a theme and you have to create certain moods so you can be creative and come up with new sounds and new ways to make music. At the moment we like working on instrumental pieces a lot.” 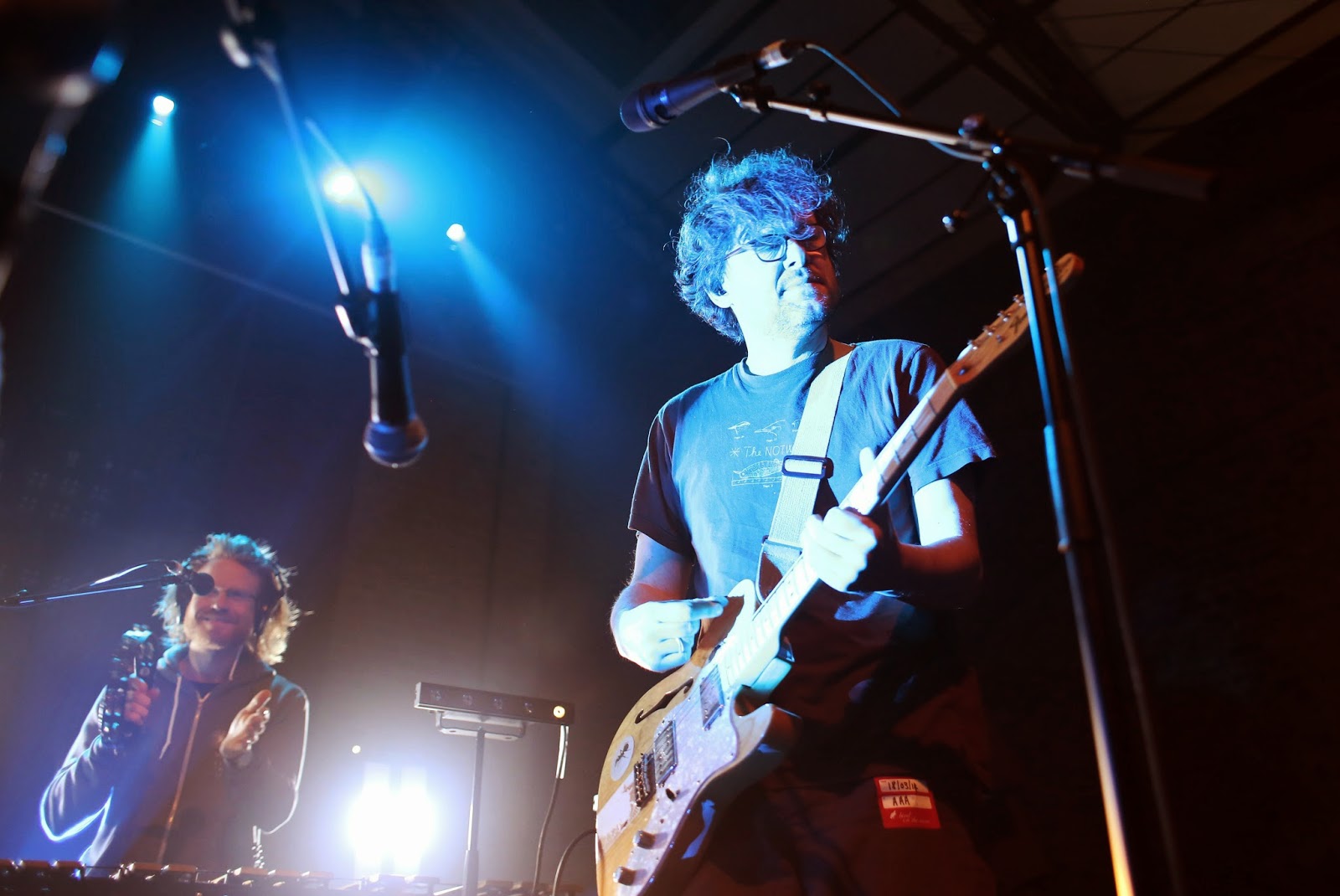 The Notwist seem to promote a strong relationship between all forms of art, and music, literature and painting are big sources of inspiration. “I usually listen to lots of music, read a lot”, Markus says, “ and look at many paintings as you get a sort of visual idea of the record from them like if it’s colourful, and if so what specific colour it is, if it’s a collage and so on. Sometimes I have a specific artist in mind when I write music. For Close to the Glass it was Wallace Berman who lived in LA in the 60s and died in the late 70s, and made mainly photographs but also unique collages and paintings. Swedish artist Jockum Nordström inspired me a lot as well. I was looking at his books and titles too, as sometimes we can visually translate words into music.”

Markus was guest editor for Magnet Mag last month, something he really enjoyed though he didn’t
have as much time as he would have liked to because he was busy doing lots of promo interviews. “It was quite interesting to collect all the things that were influential over the last year or so and choose the things I wanted to tell the readers. It was good to write but also to get some nice reactions and follow the conversation.”

Along with City Slang in Europe and Subpop in the States, The Notwist are signed with Afterhours in Japan and Spunk in Australia. I ask Markus what differences he finds in how their music is perceived in different countries and he explains that the main dissimilarity is between Germany and the rest of the world. “Outside Germany they see more influence from Krautrock as that’s the stereotype of all German bands, or they tend to mainly consider the electronic side of our music. Many people in Germany have known us since the beginning when we started as a punk rock band, whereas outside Germany they mainly know our music from Neon Golden onwards. And especially with this record it’s interesting to see how different countries perceived it in a different way. In Germany it was received quite well but sometimes in other countries I see reviews saying they don’t like it so much because it’s not in just one style.”

And what does Markus think of the current German music scene? “I can only recommend a couple of bands. There used to be many interesting electronic acts but at the moment there isn’t much. I really like Aloa Input who are from Munich and signed to Berlin label Morr music, and also Fenster from Berlin. They both make interesting experimental pop music.”

Close to the Glass is out now on City Slang in Europe and Subpop in North America.

Posted by Eleonora C. Collini at 9:19 am

Email ThisBlogThis!Share to TwitterShare to FacebookShare to Pinterest
Tags Interviews, The Notwist