IN CONVERSATION with SWERVEDRIVER


Mixing shoegaze with catchy guitar-driven melodies and dark sonorities, back in the 90s Swerverdriver created a unique sound putting out four albums and quite a few EPs between 1989 and 1998. Unfortunately they then went on hiatus in 1999 leaving frontman Adam Franklin to concentrate on different other projects: the electronic pop-folk Toshack Highway, the more classic guitar-oriented Adam Franklin & Bolts of Melody, and the duo Magnetic Morning with Interpol’s Sam Fogarino.


Following a retrospective anthology that came out in 2005, the band reunited in 2007 embarking on an international tour and reissuing their first three full-lengths (Raise, Mezcal Head and Ejector Seat Reservation) the following year. On 26th September 2013 the single ‘Deep Wound’, the first new material in fifteen years, was released to coincide with the start of a mini-tour Down Under, and was then made available to download from bandcamp in December.

I catch up with guitarist Jim Hartridge and bass player Steve George before a one-off show at London's Garage on April 4th (photos here).

Apparently a new album is finally in the making! After working on a few new songs while in Australia last year, Swervedriver are going to rehearse all the week after the London gig making the most of the presence of New York-based drummer Mikey Jones. “Mikey took over Graham [Bonnar] in 2012. He was playing with Adam in the Bolts of Melody and then Adam thought he may be right for us too”, Steve explains. “We were a bit suspicious of the idea at first, but he turned out to be really perfect as he has brought a lot to it and is really injecting some energy and fun.” So while Mikey is in UK they are going to record some new material. “We’re having bass, drums and most of the guitars done next week and then this May and June we are going to finish the recording”, Steve reveals. “ After that the plan is to mix in July and August and hopefully put the new album out in November.”

Albert Fiore mixed the single 'Deep Wound' but Swervedriver would like to have Alan Moulder (who co-produced their last three records) on board again. “It’s not 100% scheduled yet but I think Alain is going to work with us on this as well” Steve says. “We’d really love him to… if he has time as now he’s a superstar!” Jim agrees that it would be weird not to have him for the upcoming album too. “He didn’t do our first record just because he was very busy but we wanted him to do that one as well.”

Mark Gardener of Ride, who back in the days handed Swevedriver’s first demo to Alan McGee getting them a contract with Creation Records, provided backing vocals on ‘Deep Wound’ and also co-mixed the B-side ‘Dub Wound’. “We have known Mark since 1989. He runs a studio in Oxford now, plus he makes his music and still plays live”, Jim tells me. “He offered to do vocals on that single so it was all very easy. He’s a pretty relaxed kind of guy. I think he has just become a father now. We may actually use his studio again but nothing is sure as yet.” 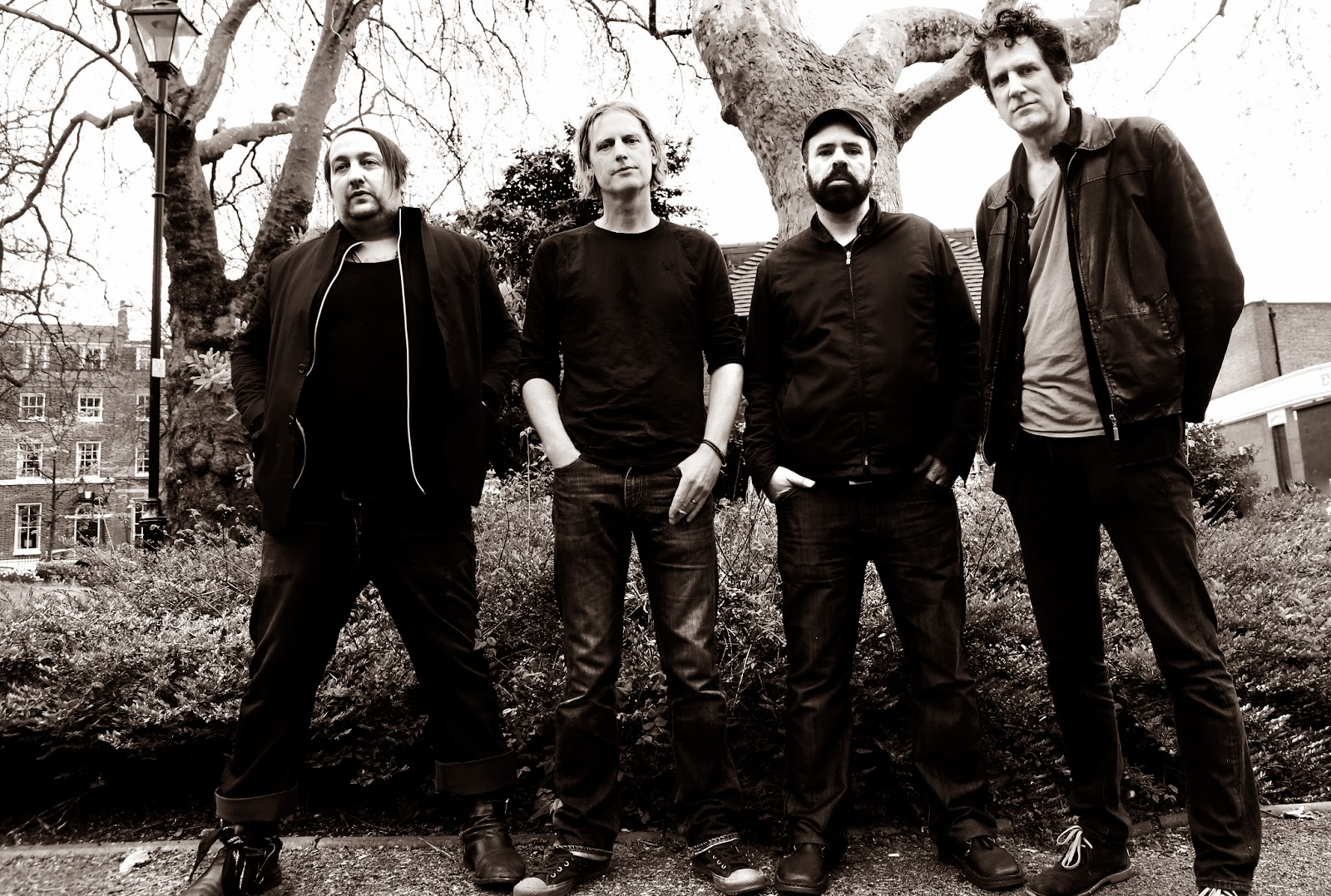 Jim thinks that computer and the digital revolution have drastically changed their writing process and the way people make music today. “We used to do everything on 4-tracks and do a lot of bashing around from scratch. Nowadays everybody seems to do everything on computers as it’s fairly easy to muck around with the arrangements and stuff like that. So that’s what we are doing as well as it’s very hard to avoid and personally I think it’s actually a great thing. You can also work from home on your own and then of course you try that with the rest of the band and have so much done so fast and so efficiently.” Steve thinks that the new album has been created in the modern way but hopefully the way they are going to record it will be quite traditional in terms of what they all have learnt and what they’ve been playing. “We want to record as many layers as possible. Previously in the 90s, sometimes when we went into the studio it was quite a slow process but now we actually know exactly what we do and how to get the feel right almost immediately.”

Back in the 90s Swervedriver didn’t seem to have much luck with labels and kept being dropped for
different reasons. The Australian label Tym Records put out their new single last year but at the moment they haven’t sealed any deal yet. “We released that 7” because we were about to go on tour and wanted to have something with us”, Jim points out. “We are still looking at options but there is really nothing settled yet.”

I ask them what impact they believe record labels can have on music these days. “I don’t know if they have any today”, Jim says “Labels don’t seem to have their own identity anymore as much as they had in the past. I suppose a label can sign a band and tell them what direction to take but they’ve never done that with us. We were first signed to Creation Records and many of their other bands kind of sounded like us, but then when we were on A & M most of the bands didn’t sound like us at all, think of Brian Adams for example. I am sure labels can have a big say but with us it has never actually happened. It may happen with major labels. For instance a guy we know who I think is with Geffen told us that he was in the studio once and an A&R guy came in and kept turning the vocals up which was ridiculous. Then it got to a point that he just waited for that guy to leave and turned the vocals down again. Thankfully something like that has never happened to us, they have never had any control on our music.”

Along with a new full-length we should also expect a reissue of their last record 99th Dream in the (hopefully) near future. “I am not sure what is exactly going on, it has been a bit of a struggle”, Jim wants to specify. “But since we have reissued the first three albums, I guess we will re-issue this one as well. If the label wants to reissue it then we will!”

Though they eventually moved to London, Swervedriver are originally from Oxford, hometown of many seminal bands in the 90s. “That’s not just a normal village. I mean, Supergrass, Radiohead and Ride are from there!”, Steve jokes. “ When you are from a small town you try hard to be good enough to be able to make it to a big town, because that’s you dream, you just want to play a gig in London, it’s a very big deal”, Jim (who like Steve now lives in the English countryside) points out.

Interesting enough though, their music has always been more successful in the States and Australia than in their home country. Jim believes that it’s because they did a lot of songs about open roads and sunsets so somehow their imagery was always more American. “Also one word can change the perception of things”, he carries on. “Our first single was 'Son of Mustang Ford' which was really a bit of a take on a Bob Dylan’s song ['Highwater - For Charlie Patton'] and that’s all. But because Mustang is an American car, most people for some reason considered us an American band.” Steve adds that in the 90s Australia and America were a bit more radio-driven, whereas UK was a bit more tabloid and music press-driven. “The year that song came out in UK there were lots of bands that weren’t relevant to us at all. You can be a bit more free-floating in a radio-based society. Plus we sound better on the radio than we look in magazines!”

I would like to know if they have any tips for young bands that start making music today. Steve thinks that they should simply commit to it. "And just be yourself!", Jim continues. "It's a bit pointless to only keep getting inspired by what's going on around you. You can start by playing covers but then you just have to seek your own identity. That's the same for everybody though. That's what I've also told my kids whenever they've come to me for advise. It's important to be yourself, rather than just reminding of someone else."