IN CONVERSATION WITH FEATURE

One of the things I love most about music is when there is a big sense of community. and that’s what is happening in the super vibrant neighbourhood of Hackney (London) right now, thanks to a new wave of interesting underground music scene with bands willing to support each other and often even share members.

Among these cool emerging bands, a personal favourite is Feature, a.k.a. Liv Willars on guitar/vocals, Jen Calleja  (Sauna Youth) on drums/vocals and Heather Perkins (Slowcoaches) on bass/vocals. Their music is quite hard to define. Some label it as melodic drone-punk, but I actually prefer the way the band describes it: simply “unpop”.

Following the 2013’s EPs Memory and Culture of the Copy, the trio recently put out Tourists - a split EP with friends Slowcoaches. Recorded live by Alexander Bradley at Hackney’s Audio Underground,  the record (which contains two new tracks and a cover of Wire’s “Mannequin”) was released digitally as well as being available as a limited risograph poster/download at their UK tour dates last September. Feature, a cassette featuring songs from their previous EPs, is also about to come out first on Australian label Ruined Smile.

I met up with the band in Stoke Newington, where they all live, to discuss their writing process, lyrics and why it's totally wrong to call them a Riot Grrrl band.

Eleonora: Liv and Jen, you started out as a duo in 2012, then Heather joined you after moving to London earlier this year. How did you actually meet her?

Jen: I first saw Heather’s other band Slowcoaches playing with our friends Omi Palone at Wild World Festival in Brighton maybe a year and an half before we actually met, and I remember thinking they were such an incredibly powerful band and she in particular was so amazing. Though we didn’t know each other at all, both Slowcoaches and Feature were on the same label, Tye Die Tapes, so we were part of the same music scene and merging together was a natural thing.

Heather: Then we finally met through friends. I know Liv’s boyfriend from when I lived in Leeds through my boyfriend at the time, George Mitchell, who plays in Eagulls. After moving to London last January, I asked Jen and Liv if I could join the band, but they told me to shut up!

Jen: That’s because I thought she was joking! When I realised she wasn’t I thought it was perfect as Liv and I had been talking about getting a bass player, but after playing together for two years we were worrying about bringing in someone else who genuinely liked our music.

The songs featured on the Tourists EP were the first written as a trio. How did you writing process change?

Jen: Writing together is so easy. When it was just Liv and I, we always had this brutal honesty, which is very important when you write as a band because you can get frustrated very quickly if you don’t like what your bandmates want to do. And it stayed the same now that Heather is in the band too.

Heather: Also, we all share vocal parts, and thankfully we all have quite a good sense of what each of us will be doing. For me it was very easy to go from a band where I sing with just another person to a band where there are actually three people singing.

Jen: It’s the same for me with Sauna Youth. With them I can’t do a lot of freely stuff now as the two vocals are meant to be the same, so if I ever do a vocal flourish I would be told that is not happening, because it doesn’t fit with the band. With Feature it’s different.

The lyrics of Culture of the Copy were inspired by the omonimous book by Hillel Schwarz. What inspired the Tourists EP? 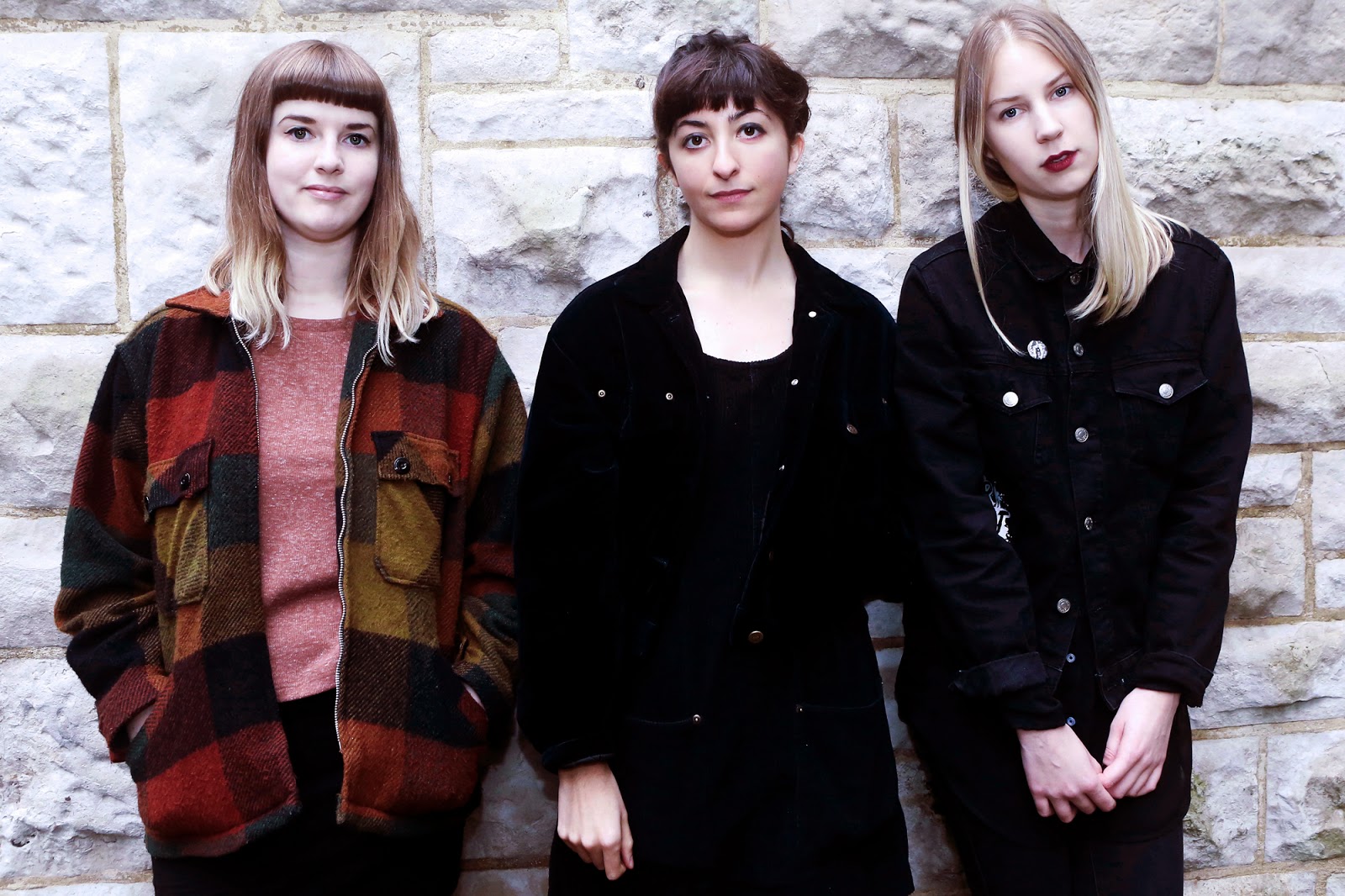 Jen: Similar things. That book is about doubles, repeats and translations throughout different cultures. The lyrics are highly pretentious because I write them and always avoid typical subject matters like parties or falling in love. The lyrics of “Wisdom Teeth” from the new EP are about a kind of objective truth, as the song references to the notion that when observed, light particles change, because electrons are never in one place at the same time. And “Tourism fiction” is about that specific genre of fiction by writers who try to raise the prominence of their small hometowns by setting their novels in those places. That was because I wanted to write a fiction about my small hometown. The lyrics are always the very last thing we write. Like for instance for Culture of the Copy, when we were on our train to go to the studio in Sheffield, I had brought just half of the lyrics and a copy of the actual book with me to read together and find ideas that we liked, then we wrote the lyrics on the actual day we recorded it.

Are you currently working on any new material?

Jen: Yes. We played shows almost every weekend since June, then we had a month off when we did nothing and got very depressed. But now it’s time for a proper album and we are hopefully going to record it before next summer.

You covered Supergrass “Caught By The Fuzz’” and Wire “Mannequin”. Would you mention them among your music influences?

Liv: Personally I wouldn’t. It was actually Jen’s idea to cover that Supergrass song. I initially wasn’t sure about it, but now I am a converted Supergrass fan. As for Wire, I was always aware of them, but I had never been a huge fan, so that was just a nice chance to go back and have a proper listen.

Heather: I am not a huge Supergrass fan either, but I am a big Wire fan. I think Pink Flag is one of the best records ever written. We decided to cover “Mannequin” before we realised another band also had done that, but I just wanted to do it anyway as I think it does work very well in terms of what we can do with the instruments.

Jen: I had just heard “Caught By The Fuzz” played after a gig. Whenever you think about covering a song is mainly about the vocals, but that song is also so punk, yet full of harmonies.


London is a city that offers many opportunities for musicians, but at the same time there is a lot of competition. How difficult do you think it is for young London-based bands to stand out?

Heather: The music we make is about the community we are part of regardless of what city that’s in. And we all have lots of friends that support each other in making music. When I was living in Leeds, many people were complaining that’s quite difficult to make a living outside London, but at the moment there actually seems to be a lot of focus on bands that are outside of London.


Jen: If you live in a smaller city like Brighton there will only be one big show on Friday and everybody will go to that, whereas in London there are so many shows every night. When we went on tour we saw a bit of difference in terms of show culture. I think we all agreed that Sheffield is probably the best place to play, because shows are busy and people are enthusiastic. For us what matters is not that a show is busy but that people actually have a good time.

Liv: Yeah, we have always been in bands as that’s just a natural thing for us. We really like playing shows and going to friends’ shows too, but we want to enjoy it for just what it is rather than seeing it as a pathway to somewhere else.

You wrote a couple of very interesting articles about feminism and Riot Grrrl bands. How much do you think the fact that journalists abuse the definition Riot Grrrl to describe almost every band whose members are mainly women has to do with lazy journalism and how much with gender discrimination?

Jen: Every single band can tell you how annoyed they are by comparisons or mixed-up genres. But in this case when a band of women is called Riot Grrrl is not just about mixing up genres, it’s actually a stereotype based on a gender. In spite of not sounding like a Riot Grrrl band at all, we have been called that hundreds of times and even Sauna Youth, where I am the only girl, were called that for not other reason than I am a woman. So it’s lazy journalism fundamentally, but it is also discriminatory. We just want to make music and not be constantly reminded that we are different. There are other bands that actually like being called Riot Grrrl. It also depends on the genres I think. Like for instance in hardcore punk there is still a big problem with misogyny. 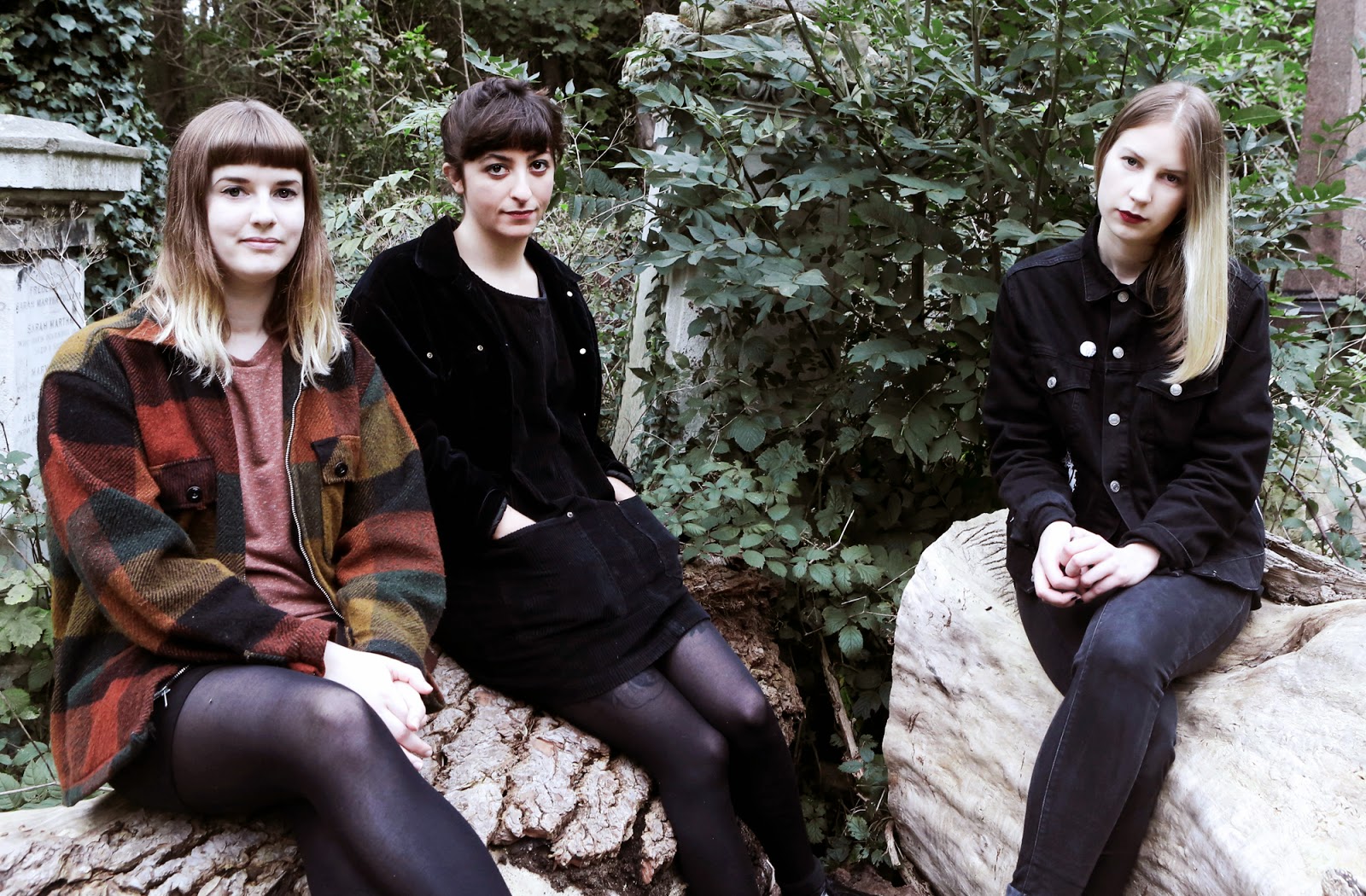 You can catch Feature at the following dates over the coming months:

Posted by Eleonora C. Collini at 8:06 am