IN CONVERSATION with BRONCHO 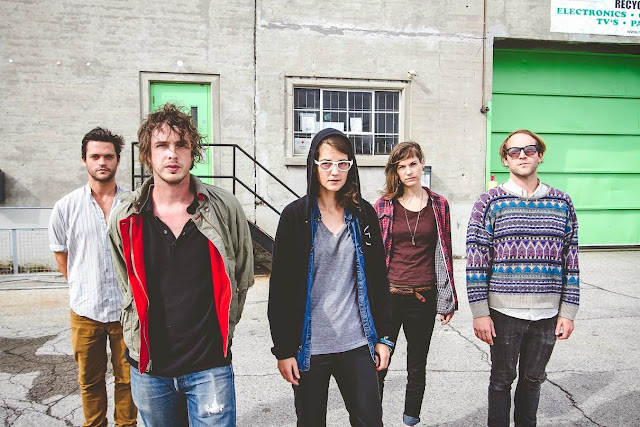 Blending the catchy sonorities of the Beach Boys with the outrageousness of the ‘70s glam rock, BRONCHO are here to win you over with a sound you didn’t even know you dreamed about.

After a difficult start, due to their first label collapsing whilst the band were on tour in support of their debut record Can’t Get Past the Lips (2011), luck finally went their way when they signed to Dine Alone Records. Not only one of their songs (“It’s on”) was used as the end title for the Season 3 Premiere of  HBO hit show GIRLS, but also their sophomore album Just Enough Hip to be Woman (2014) has been very well received worldwide. Joined by Mandii Larsen and Penny Pitchlynn from Low Litas, Ryan, Ben and Nathan have been touring non-stop for months.

Catching up with frontman Ryan we discuss his influences, touring with Billy Idol, working on some new material, and what his favourite sound is.

How did it feel to have a song of yours featuring in the super popular TV series GIRLS?

It felt great, everyone was very happy that we were a part of the show. I like being part of something that I am already into.

Do you get the chance to watch lots of TV?
It depends. I can binge watch stuff every so often. I have an addictive personality, so if I get into a show I will want to keep going. But I go through periods of time when I don’t watch anything and I will be addicted to something else, like candy crush, or certain categories of pornography.

The video for “NC-17” is about a kid getting exposed to adult things at an early age by his brother’s friends. Was it somehow inspired by an autobiographical experience?
Yeah, being the youngest with two older brothers exposed me to certain things that I would have otherwise not been privy to.

In many scenes of the video the kid has tons of cash in his hands. What kind of power do you think money can have on kids in the contemporary society?
I loved getting money as a kid. It was a form of freedom as I could get whatever I wanted. I would spend time figuring out what I could get and I couldn’t wait to spend it.

I heard you are already writing new material…
That’s right, I’m ready to start on a new record. We have a lot of touring coming up, so I’m going to squeeze time in wherever I can.

Your first record label collapsed while you were on the road in support of your debut album. Did you have a plan B if things hadn’t worked out with another label?
We probably would have had some friends of ours put it out, but I’m really glad that things worked out the way they did. I love working with Dine Alone Records as they fit so well with us. We get along very well, and always have a fun time when we’re together.

Do you usually write music thinking about how the songs will sound in a live setting or do you focus more on the recording process?
It depends, some stuff makes a lot more sense live than other songs, and some songs make more sense recorded. I try to make the most sense out of each song whether it be in the studio or live. It’s a lot easier if I’m open to interpretation for each song and both worlds that each song will live in.

You recently toured with Billy Idol. How would you describe the difference between playing on big stages and in small clubs, and where do you feel more comfortable?
We got very comfortable on the big stages, but I still think we make the most sense in a small claustrophobic environment. I like mixing it up though. That tour was tons of fun and I would do it again for sure.

What is your funniest tour memory?
I’m not sure of a funniest memory, I like having people around that like to have fun, so it produces too much.

What impact do you think being from Oklahoma has had on your music?
Not as big as it would have been had I grown up in Oklahoma a long time ago. Everywhere these days is pretty similar to the next place. The internet has closed the gap between the city and the boon docks.

Out of all the records your parents used to play a lot when you were growing up, which one had the biggest influence on you?
My parents played a lot of Beach Boys growing up, those records were definitely my favourites.

What is your favourite sound?
Boys’ choirs.

Is there a mistake you made in the past you feel you have learnt a lot from?
Not anything off hand, I don’t have a very good memory. That’s probably my best asset!


Originally published on London in Stereo

BRONCHO are playing at London Dingwalls on July 1st.