IN CONVERSATION WITH CALEXICO

Joey Burns discusses new record Edge of the Sun, his thoughts on immigration and the most precious instrument he has ever owned.

Desert-dwelling Tucson duo Calexico were founded in 1996, by songwriter Joey Burns and percussionist John Convertino, then members of weird-country combo Giant Sand. Since the release of their atmospheric debut album Spoke in 1997, they’ve gone a long way, expanding as a band, both in sound and personnel, taking to frequent collaborations, and never hesitating to experiment with genre, be it cumbia or flamenco.

Calexico’s eclectic and invariably compelling noir-rock has returned with Edge of the Sun, their mesmerising ninth album, which, among others, features collaborations with Sam Beam (Iron & Wine), Ben Bridwell (Band of Horses) and Neko Case.

I caught up with Joey Burns before the band’s show at London Shepherd’s Bush Empire, and we discussed what inspired the new record, his thoughts on immigration and the most precious instrument he has ever owned.

Edge of the Sun was mainly written in Mexico City. How much did being in that city influence the album both musically and lyrically?
It certainly had some influences as it gave me the chance to spend some time writing songs with John Convertino and Sergio Mendoza, and also the luck to go somewhere where I was able to live, sleep, eat and breath music for ten days or so. At home you can only have a few hours of music a day so it takes a lot longer, whereas if you go somewhere you can really focus on a project and write music. Also, being in a wonderful and inspiring environment surely had an influence on the mood, the feeling and the excitement.

My personal highlight is probably “Bullets & Rocks”, which is a song about immigration. How difficult do you think it is today for immigrants to integrate, and find the right balance between their own culture and the one of the place where they moved to?
Those are big questions and I am not sure I have an answer for them. My mom and my dad are from Upstate New York but they moved to Canada, which culturally is not that different. I was born in Montreal, Quebec, along with one of my brothers, and then we left shortly after I was born and travelled within the States a lot, but I am not sure if that had any influence on why I am so interested in immigration. John’s family came over from Bari and settled in Manhattan to start their family. Those are the stories of everyone, especially in the States which is a country that started out from immigration, and I am very intrigued by stories of immigrants, whether they happen at the border between United States and Mexico, in London or on the Mediterranean Sea. A few years ago, while leaving Calais we had stopped to get some fuel and the driver of our tour-bus noticed that the lock had been broken, so we opened the doors and saw four individuals, probably clandestine trying to get into UK. And on the Mediterranean Sea, you hear many stories of people that hop on ships and try to find their way into Europe. All this is so interesting to me, the fact that people are all about moving and sharing their different cultures, foods, and that all makes us come together. But at the same time I wish things weren’t so drastic and people didn’t die in the middle of the desert between the States of Mexico or on the Mediterranean Sea. “Bullets and Rocks” touches on some human sides, looking at things from the perspective of families and individuals trying to make a better way for themselves.

Usually what inspires you most: places, people or things?
It is all of them combined, it is difficult to separate them. For instance now we are here, we are talking, you are having some water, I am having some tea, we could be in Iceland, in Arizona, in Milan or in London on the banks of the Thames…. It comes from all of those, there isn’t one that is more important. Sometimes it’s a place that matters more, sometimes it’s people, stories or you also often read about wonderful music or art made in isolation, without much influence from the outside world, but just generated from people’s imagination. For instance one of my four-year old twin daughters has such an incredibly vast imagination that sometimes it’s so hard to make her come back to reality, because she is so immersed in her own world! 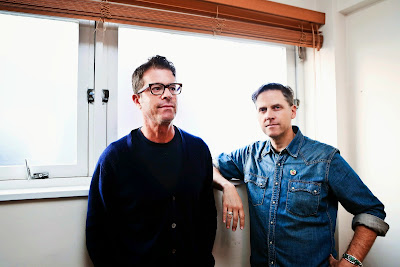 This is probably your most expansive record as yet. What impact did the rest of the band and all the guests had this time, especially in comparison with your previous albums?
Every record is different for me, yet there are a lot of similarities connecting the songs and the albums, as it’s sort of always the same people and there haven’t been any drastic changes. Our last record Algiers was probably moodier and stylistically more minimal, whereas according to John Convertino, Edge of the Sun, particularly the special edition with the bonus tracks, which has even more variety, is reminiscent of Feast of Wire from 2003. I agree with him, and the band definitely have an influence because, as much as I wanted to make some of the songs minimal, they are adding lots of layers and textures live. When I was in Milan we played in one of the two RAI1 music studios where you could tell there had been a lot of great music happening, and I like that kind of places and the idea of being in a sort of orchestra where you can create textures and layers, adding new voices and expressions. And that is what I am after with this band, whose musicians are from different backgrounds, giving a lot of variety.

Unlike many musicians, you seem quite open to talk about your music and what the songs are about. How important is it for you that your music gets correctly interpreted?
I think it is almost impossible as much as I can try to a certain degree. At the same time I don’t want to spoon-feed people by saying what the songs are really about. There are times when I feel that maybe people don’t get the full picture, but from people coming to our shows I hear how important it is to see these songs performed live, as that is very engaging and there is a lot of communication. The crowd can push the direction so much and I love that. Back to your question, you can’t really be completely open, as you can’t take away the mystery in music and art because everybody has their own connection. That is why we always include instrumental songs in the mix, both live and on records, as they are interesting and more open to interpretation.

Not long ago you wrote two movie soundtracks (Circo and The Guard). How would you describe the relationship between music and film?
It is super important and just depends on the director, music editor and scriptwriter. Every movie and every director is different. Circo is a magnificent documentary and was the first film by Aaron Schock, who travelled to Mexico several times and lived with his family as a circus performer. After getting to know Aaron, I realized how much of his personality is in the film because of his openness and ability to listen, which also influences the world around him. He makes things so comfortable that people can open up, so much that I asked him to collaborate on two songs and help us make the meaning of Edge of the Sun. Although he didn’t know how to translate his ideas into musical terms, he managed to express himself so well that the experience was great and very comfortable. The other film, The Guard, is basically an Irish western, such a great movie to watch, and the director gave us a general idea to work on.

What is the most precious instrument you have ever owned?
That is easy for me… my grandfather accordion, and the next would be my great grandfather violin, which I don’t have, but I have my other great grandfather paint-box, which is not a musical, but still artistic instrument, with brushes and palette inside. That is part of my family now, it has been passed on from one generation to the other.

What do you think is the most important lesson you have learnt over twenty-five years of career? Patience. You really need to be patient and remind yourself to breath, and in breathing there is everything.