IN CONVERSATION with FLOCK OF DIMES

Flock of Dimes' Jenn Wasner discusses the making of her debut record, playing with big Orchestras and being impulsive

Jenn Wasner definitely knows how to keep herself busy. Best known for being one-half of the critically acclaimed indie-folk duo Wye Oak, she also founded Dungeonesse (an R’n’B project with White Life’s Jon Ehrens), along with touring as a member of Dirty Projectors, Future Islands, the Gene Clark No Other Tribute Band and various others. And if this wasn’t enough, only a couple of months after the release of Wye Oak's fifth studio album Tween, Wasner has also just put out her first solo record as Flock of Dimes. If You See me, Say Yes, which came out on Partisan Records on the 23rd September, is a compelling collection of folk melodies interwoven with electronic beats and dreamy synthesizers, wrapped around the ever so evocative Wasner’s vocals.

Flock of Dimes was first conceived in 2012, but after just a couple of 7" releases, it went quiet, not only due to Wasner’s other music commitments, but also because with no deadline, what really mattered to her was to be absolutely sure she wouldn’t have any regrets about the album whatsoever. “You only get one first record, so I wanted it to be the best I could possibly do”, she tells me while sipping a cappuccino in the garden of a Dalston cafeteria on a sunny, crisp autumn morning. “I initially thought it would take a couple of years, but it ended up taking way longer as I wasn’t ready to let it out. At some point I thought I was done and went into the mixing, but I wound up cutting half of it and rewriting it.”

Aside from a couple of collaborations, Wasner played the vast majority of the record, switching from one instrument to the other. “At first I was really excited to do something completely on my own, but I didn’t anticipate that at a certain point all I wanted was to be able to turn to someone else and ask what to do”, she confesses. “It is a very lonely and intimidating process to take on by yourself.”

If You See me, Say Yes was recorded in a few different places. A lot of the initial demos just  featured Wasner, first in Baltimore then in North Carolina, and though she mainly self-produced the album, she got some help from friends and frequent collaborators Mickey Freeland in Baltimore and Aaron Roche in NYC, while John Congleton mixed it in Dallas.

The importance of being alone is a big running theme on this record, reflecting Wasner’s move from native Baltimore to Durham, North Carolina in search of a quieter place halfway through the making process. “I now live alone in a giant house in the woods. At the end of the tour opening for my friends Sylvan Esso, I was sitting down at their house admiring the neighbourhood and they told me that the house next door was available, so I impulsively decided to give it a try. A lot of the songs would have not existed if I hadn’t been able to leave behind some of the distractions of a big city and be present in a quiet space with myself.”

Wasner defines Flock of Dimes as experimental pop-music. “It’s pop music because I intentionally wanted a lot of the songs to be accessible, so that people could feel themselves in them, but the songs are also a bit odd”, she points out. “I always try to write music within a form, but in a way that is interesting to me.” 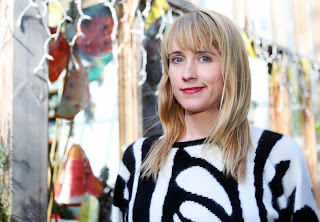 For this album, she was mainly trying to craft a universe for the songs that felt right and authentic to her. So, along with the synthesizers and the drum machines -on which most journalists seem to fixate, simply labelling the project as electro-pop - there are just as many organic elements like guitar, piano and pedal steel. “One of my biggest heroes is Arthur Russell, whose music has been extremely varied, encompassing many different styles, and like him I am also drawn into not limiting myself and the sounds I can use based on the music genre I am trying to make. In fact I think some of Flock of Dimes songs are the most interesting and complex I have ever written.”

Aware that a lot of people might write this record off because of the way it is produced, Wasner wants
to try and have different versions of the songs available to people. So recently, together with Swans’ Thor Harris she performed a version of “Everything is Happening Today” with xylophones, pedal steels, violin and viola in Dallas, followed by another stunning version of the song re-arranged by William Brittelle and backed by the String Orchestra of Brooklyn at NYC’s Poisson Rouge. “Britelle had worked with Wye Oak before, adapting some of our songs into formats for chamber ensemble and even bigger orchestra, so I wanted him to work on this with me too”, she explains. “Collaborating with these full-on orchestras of world-class musicians was at first very intimidating, but then it actually made me feel more confident about my abilities and what I can contribute than ever before. Everybody is bringing their distinct skills and there is a lot of mutual respect.”

Probably her fondest memory of her now ten years in Wye Oak is another performance with a Symphony Orchestra in her native Baltimore. “Playing versions of songs never played before after practicing for just a couple of hours, in front of a sold-out crowd, with all of our friends and family there, could have gone so wrong, but it just landed perfectly, and I actually felt that I was performing at my highest level”, she recalls. All these Symphony shows are unique, as they happen only once and are over in a flash, so if you are nervous you might not be able to appreciate what is happening in the moment, but on that occasion Wasner felt more present on stage than ever before. “The fact that I was able to be in front of a hometown crowd playing music that I was very proud of, feeling so comfortable and enjoying every minute of it, was probably the best moment of my life as a performer.”

Wasner took some piano lessons as a kid and has a bit of a theoretical background, but she mainly understands music on an instinctual level. “When I hear a part that I can conceive, but I can’t actually play, I can go to someone that is better at that instrument than me and tell them what I want. I don’t really need to be the greatest in every single thing, as I just envision how things should be and then reach out to people that can help me realise them.”

After taking it for granted for a long time, only recently she realised that her voice is probably the instrument she can play the best. “My voice is the only thing that is distinctively mine and the easiest way to express myself in the most immediate way”, she adds. “Since I started treating it as an instrument, practicing constantly and putting a lot of effort into it, it has got more and more satisfying and rewarding.”

Another great recent achievement was having Reverend Guitars contacting her to create the Jenn Wasner signature guitar, which combines the dynamic power of the Charger HB, a model she has been playing for a long time, with the visual aesthetic of her solo record. “When they approached me I was conceiving the visual art for the Flock of Dimes album, and as on the cover there is an abstract painting of me wearing a jumpsuit, I thought it would be really cool to have that guitar miming the jumpsuit patterns. So we got my talented friend April Camlin, who had designed the jumpsuit to also design the guitar”, she explains.

And as if she wasn’t busy enough, Wasner is already thinking of a new Wye Oak album. This year they only released Tween, a collection of outtakes from previous records, but her bandmate Andy Stack is already working on new material. “When I get home from the tour I have lots of ideas from him to work through and expand upon, while he will be on tour playing drums in Lambchop this winter”, she tells me. They hope to have something complete within the next year. “For me it is very important to have both projects to exist simultaneously. Because I am very impulsive and have a very short attention span, I discovered that if I am only doing one thing no matter what that thing is I go crazy as it gets boring and repetitive, whereas if I have both I am more excited to be working on whichever project I have been working on, and it helps keep both of them more exciting and fulfilling.”

"If You Can See Me, Say Yes" is out now on Partisan Records