IN CONVERSATION with THE LOST PATROL 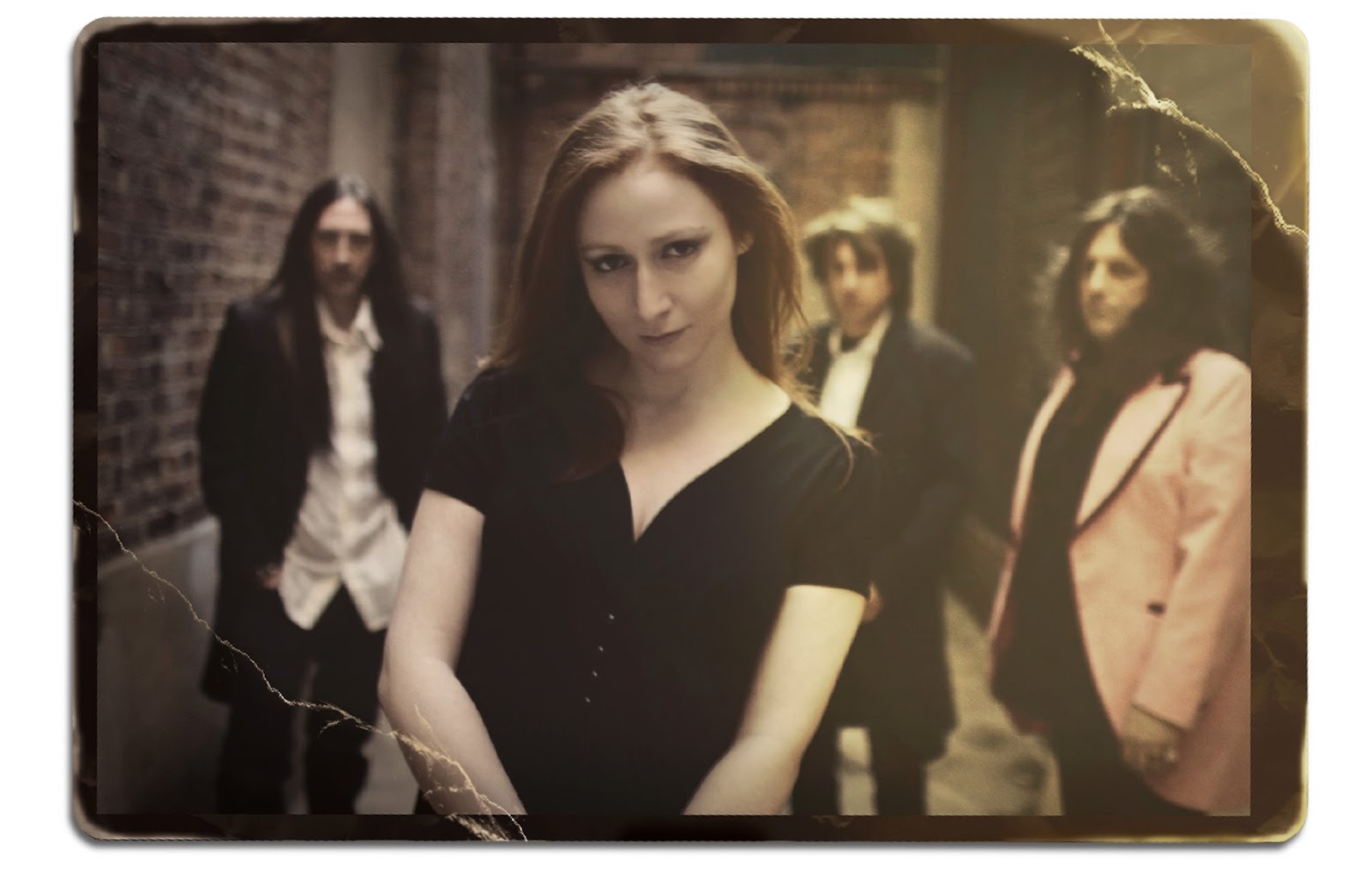 Beginning as the soundtrack-music project of multi-instrumentalist Stephen Masucci in the late '90s, after releasing seven albums and going through many band incarnations, lineup changes, and the addition of Michael Williams as an official member in 2003, The Lost Patrol finally found their distinctive voice when singer Mollie Israel (daughter of noted filmaker Amy Heckerling) joined the band six years ago.

Since then, the New York-based trio released five critically acclaimed records as well as having their songs placed on both the big and small screens, including The CW’s Gossip Girl, Fox's Rake, Amy Heckerling’s Vamps (where the band also makes an appearance), the hit found-footage film Chronicle, and Hal Hartley’s latest Meanwhile.

I caught up with the band to discuss the new album Chasing Shadows, the recent incorporation of live drums into their sound, the challenges of being a musician and the endless human trial to achieve something illusive.

Eleonora Collini: What impact do you think the addition of drummer Tony Mann to the lineup had on The Lost Patrol music?
Mollie Israel: Tony's playing is a breath of fresh air. I have never had any problems with our using the drum machine in recordings or at shows. It's convenient and lends its own flavor to the music. But there's something you can't synthesize about live drums. Every drum hit is unique, and not always perfectly in time, but live drum performances have a life of their own that drum machine tracks don't often have. I feel Tony's playing lends a breathability to the music that hasn't always been there in that sense.

What made you decide to cover Graham Gouldman's  “I am 28”?
Mollie: “I'm 28” was a song that Stephen [Masucci] had wanted to cover for a long time, even before I joined the band. But it seemed appropriate to do it for this album because I was 28 at the time we were recording it. That, and it's just a great song.

What prompted you to write a song (“S’enfuir”) in French?
Mollie: We always wanted to experiment with writing a song in a different language, and French is, without a doubt, one of the most beautiful sounding languages from a lyrical standpoint. The only hitch being that I don't actually speak French, so I wrote the lyrics in English and then translated them after the fact.

Larry Alexander worked on almost all your records. What has he brought to the table?
Mollie: Larry is a master engineer, and a brilliant musician. I think the fact that he is a musician himself probably allows him to approach engineering in a different way. His own unique musical sensibility comes through his production and mixing style, and makes the songs different than they ever would have been without him.

What does “chasing shadows” mean to you?
Mollie: To me "chasing shadows" is a metaphor for the endless, and tireless life we sometimes lead, trying to achieve something illusive. A goal that gets ever farther away, a state of being that is always just out of reach, that feeling of always treading water just to keep your head barely above it.

Your music featured on the soundtracks of quite a lot of TV series and films. How would you describe the relationship between music and cinema?
Mollie: Music and cinema go hand in hand so well because they both inspire the other. Do you ever listen to a song and create your own music video inside your head? Or look out on a certain scene and have it evoke a certain song? Music can be a very visual thing. Certain songs convey moods, images, colors. That's why music is such an important part of filmmaking, I think. The right song in a sequence can make or break a movie. Just look at what "Be My Baby" did for the opening of Mean Streets.

You also made an appearance on Amy Heckerling’s Vamps. How was the experience?
Mollie: Working on Vamps was a lot of fun, and we were all very grateful for the experience. It was different for us. Lip syncing, or guitar miming, in a room where there is actually no music playing can feel a little awkward, but it was great. We got to meet a lot of very talented, and very interesting people. It's always inspiring to be in an environment where everyone is really good at what they do, and is working together to create something greater than the sum of its parts.

Speaking of Amy Heckerling... Mollie, what artistic impact do you think your mum had on you while growing up?
Mollie: My mother was, and still is, extremely influential to me creatively. She has a broad, and deep knowledge of art history, cinema studies, and literature. She always shared the things that she loved with me: music, movies, books, artwork. I was raised to have a great appreciation for things that were before my time. And I think that plays a huge part in who I am as a person. A huge throwback.

The Lost Patrol had been around for a few years before you, Mollie, joined them. Is it true that you guys met through CraigList?
Mollie: Yes. I placed a very silly ad on CraigsList. I had no experience in bands whatsoever, I had only ever played open mics by myself. It was sheer luck that Stephen [Masucci] emailed me and asked me to come in and audition. They had no idea if I could sing, or if I was crazy or what. Luckily, they thought I was just the right kind of crazy for the job.

Stephen, in a recent interview for Rust magazine you said that you are really wary of having a unique style and not repeating yourself or other artists. How conscious of that are you when writing music?
Stephen Masucci: I really need to clarify my original statement a bit. What I was trying to say was that there's a subtle difference between having an identifiable style and simply repeating yourself, and between assimilating your influences in a unique way or just copying things you like from other artists. I'm not really conscious of it when writing but I try to be aware of when something starts to feel wrong or possibly dishonest artistically. We do our best to do our best.

Among all the bands you have been compared to, which comparison do you think is the most appropriate?
Mollie: The comparison I like the best is Blondie. But that's more due to my own musical taste and aspirations.

What is the most difficult part of your job?
Mollie: The most difficult part is to accept the fact that you may not always be inspired by your own work. And that's a tough thing to come to terms with. If you're doing any sort of art by committee, you are beholden to other people and the pace of the project exists independently of you, or whether or not you feel inspired to do the work. And unfortunately sometimes you just have to sit yourself down and force the ideas out and hope you get something good. It's not always some divine process, sometimes it's just hard work.

What are your future tour plans?
Mollie: The Lost Patrol always manages to stay pretty active tour wise. We have frequented the West Coast and have had the pleasure of playing many great venues such as the Whisky A Go Go and Bar Sinister.

Unfortunately, you haven't played outside the States yet. Is there any city in particular you would like to play in, and why?
Mollie: I would love to play in Paris. I hear they subsidize the arts there, and I always felt our music would be well received in Europe.

What record do you usually listen to in order to get yourself motivated?
Mollie: One of my favorite albums as of late is the Yeah Yeah Yeahs Mosquito. There are a lot of great tracks on that album, namely, a song called, "Despair".

Please describe your typical day when not working on your music or touring.
Mollie: My personal life has changed drastically over the past few months. I just had a baby girl, so I guess my usual day now is to getting up, feeding my baby, and then just trying to get some writing in.

If you won the lottery what would you buy?
Mollie: If I won the lottery, I would buy myself a little house, and have one room for recording, one room for puppet building, and another room for everything else. And then I guess I'd give a lot of the remaining money away.

Email ThisBlogThis!Share to TwitterShare to FacebookShare to Pinterest
Tags Interviews, The Lost Patrol