IN CONVERSATION with WAMPIRE 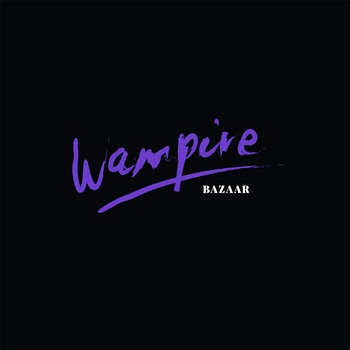 
Following their debut full-lenght Curiosity, the new album Bazaar came out on October 27th via Polyvinyl Records. I first caught up with Rocky Tinder, then I chatted with Jacob Portrait (bassist of Unknown Mortal Orchestra), who produced both albums and whose contribution has been essential to the band sound.

Eleonora C. Collini: What were the main differences between Bazaar and Curiosity in terms of writing and recording?
Rocky Tinder: Curiosity was a culmination of songs we had been playing for a few years leading up to recording as well as other stuff we wrote during the process of recording. Bazaar was pretty much written over a few months leading up to recording. So a lot of what was different was the time frame, and also Bazaar was written after being on the road for a while, so there were ideas we had built up from seeing different bands and the experience of playing live.

Did Bazaar have a long gestation?
No, maybe quite short would be more appropriate to say, as we wrote it all in about 3 or 4 months and recorded it in less than a month. The idea behind the album was to have it sound a lot more stripped down, yet fuller since it was an actual studio recording, so doing it quickly felt real good. We are talking about taking more time with the third one and playing with some new ideas, like actually jamming out the songs ahead of recording. We don't usually work out the songs very much before we start. It's a fun way of working on songs and we haven’t done it enough to be honest.

Did you have any kind of fixed vision in mind for the record, when you were writing it?
We wanted it to drive the whole time, to sound all coked up like a Bowie record and to be lush and hi-fi, but a lot of what gets planned heading into the studio gets lost quickly, so there's a lot of ideas we had beforehand that got tossed out the window once we were all siting in the same room.

How important has Jacob Portrait’s contribution been?
He’s quite important and really he has become pretty invested in all of it too. We sit and write parts with him in the studio, work out arrangements and talk lyrics. He also rips the bass on almost all the songs, so when we are on tour he checks in a lot to see how things are going. It's partially his baby too.

Curiosity had a sort of funny, retro cover. Bazaar has a very minimal cover. What’s the idea behind it?
We were working on another cover for Bazaar that didn’t feel right, so we came to the conclusion that simple and plain would be a cool change and I really like the result. When the new record announce happened our album cover didn’t look like everyone else's so that was nice too. Ultimately, people did a lot of judging of Curiosity based on the cover, so this time around we were happy to have people wonder what they were getting into.

Do you and Eric usually write songs together from the start or do you come up with an initial idea individually and then work on it collectively?
The songs are written separately and then a lot of changes happen in the studio together.


Please describe your music in one sentence.
Our music is something we make light heartedly and then smear the color purple all over.

Is there any band you have been compared to you particularly dislike and get annoyed when you hear/read the comparison?
We don't mind it so much but the French really like comparing us to MGMT.

How much influence do you think music media have today?
As much as one would let it. There are musicians out there doing exactly what they want and that usually seems to go over best.

Do you still play at house parties?
We would if it made sense. We came from a time and place where it made a lot of sense and a lot of bands were born in basements but that’s not so much the case in Portland anymore. It has a lot of condos and yoga moms and yuppies getting boutique ice cream nowadays.

You toured a lot last year. What is your fondest tour memory?
Probably riding a jet ski in Minneapolis. We were hosted by this really wonderful family and they were very enthusiastic about letting us ride their jet ski in 50 degree weather. It was the most fun I had had in a long time. Also in San Diego I ate a California burrito while standing in the ocean. It was really nice.

How is your relationship with Polyvinyl Records?
So great! They give us artistic freedom and are always there to help. Their help and support has meant the world to us and they feel like family.

You just won a lot of money and you are going to spend it all on new expensive music gear. What are you going to buy?
Lots of synthesizers and recording gear, and some really sick vintage guitars. Nothing in particular, I am a very impulsive shopper and probably the wrong person to ask a question like that.

What record would you play to seduce someone on a first date?
Connan Mockasin's Caramel

What is your favourite hangout in Portland?
Sassy's

Do you watch Portlandia and if so what do you think of it?
It’s ok

What was the last time you were touched by any form of art (a book, movie, art exhibition, music) etc.?
At CMJ we played with King Gizzard and the Lizard Wizard and I died a little. Also we watched the movie Street Trash in the van recently and that was pretty cool.

Eleonora C. Collini: What input do you think you gave to both Curiosity and Bazaar?
Jacob Portrait: I would say things like "Are you sure you want to do that?" and "I'm not sure about that.". Also, I often said to Rocky, "I don't think that's as pervy as it could be.".

How would you describe the difference between the two records (if any) in terms of production?
I added Treble to Bazaar. Rocky only has one speaker in his Saturn coupe, so we decided to make Bazaar a little brighter and clearer for his car speaker. Also, we added saxophone.

Did you record everything analogue?
Yep.

Was there any production trick you used on Bazaar you are particularly proud of?
Yes. When the mixes were finished I ran the entire album to an Otari MTR 90 II and wiggled the pitch knob back and forth as the record played back into the recorder.

If you could change anything about Curiosity and/or Bazaar what would it be?
The press picture that accompanied Bazaar.

Do you have any favourite memory of the time you guys spent together in the studio?
The last night we had to make this album, they didn't show up. They went to a strip club in Queens with "no cell service". I think it was called Scandals. I finally had the place to myself.

What aspect of Wampire’s music you think you can relate to the most?
Definitely the "everybody needs to loosen up" part. It's always been Wampire's strongest hand. When you see them, or hear them, Wampire makes you feel like you aren't enjoying things as much as you should. People that write them off are probably too uptight.

How did you guys actually meet?
I met them after they performed in the Burgerville lobby in SE Portland. They weren't wearing shirts, or pants. True story. I actually thought they were a homeless band.

Do you usually hang out together outside of work?
I liked them on their first album. Now, they are played out.